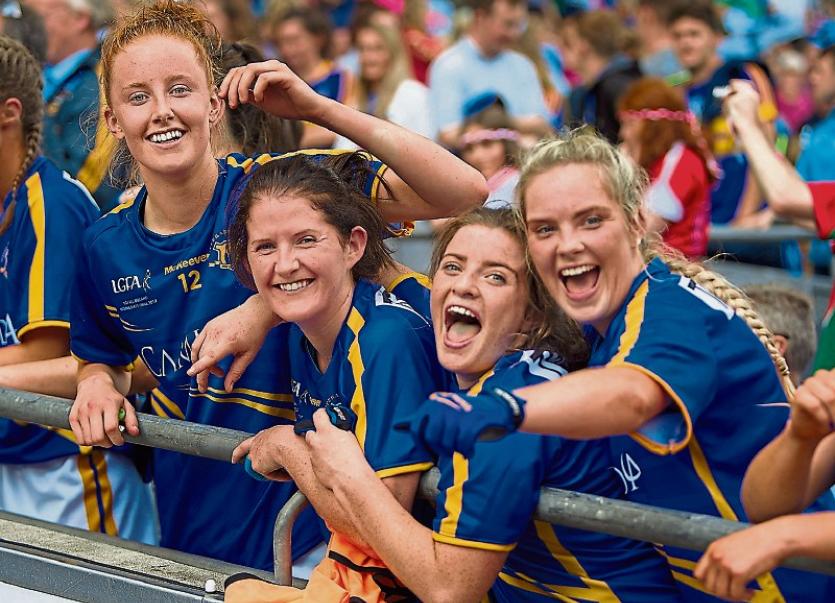 Tipperary Ladies Footballers are All-Ireland Intermediate champions for the second time in three years after overcoming Meath in a battle royal at Croke Park this afternoon, prevailing in the end by five points.

Favourites at the outset to triumph and regain their senior status in the process, the Tipperary girls had to overcome a dogged resistance from the Leinster side before eventually kicking clear midway through the second half to win. But for long periods of this encounter there was nothing between the sides, and perhaps the biggest difference was the magnificent display of Tipperary’s Aisling Moloney.

The Cahir star kicked eight points in her side’s victory and deservedly was voted ‘Player of the Game,’ as time and again as Meath put it up the Shane Ronayne managed Tipperary, it was Moloney who came to the rescue with the vital scores.

After Meath opened the scoring with a point inside 20 seconds, Tipp settled well and were three points clear after 10 minutes, leading 5-2, with points from Aisling Moloney (2), Orla O’Dwyer, Aisling McCarthy and Caoimhe Condon.

But they couldn’t shake off the persistence of 'The Royals' who point-for-point were matching them with Vicky Wall in particular a menace for Eamonn Murray’s side.

Further points from Angela McGuigan, Caitlín Kennedy and Moloney (2) had Tipp 9-7 in front by the 24th minute before Tipp were rocked by a goal from Meath corner-forward Fiona O’Neill which they quickly followed with another point to lead by two as half-time approached.

However Tipp struck back almost immediately, as if sensing the danger, with Grangemockler’s Angela McGuigan raising a green flag after a great move up the field by the Tipp team.

Aisling McCarthy sent Tipp to the break leading by a single point at 1-10 to 1-9 with the final score of the opening half almost on the hooter.

The second half continued like the first and it took almost nine minutes for the first score to come with Meath tying up the match with a point.

After a few early wides Aisling Moloney put Tipperary ahead in the 41st minute and this was quickly followed by the game’s crucial score – Tipperary’s second goal. It came about after the hard-working Orla O’Dwyer intercepted a Meath move out of defence, linked up with Moloney who put her Cahir clubmate Aisling McCarthy throw to finish superbly.

Almost immediately O’Dwyer herself pointed in what might have been a goal and Tipp were suddenly five points clear in the space of three minutes.

From there to the finish they more or less went point for point with the Leinster ladies, controlling the midfield with some great support work also from the likes of Anna Rose Kennedy and  Caitlín Kennedy.

Tipp’s three points over the closing stretch all came from Aisling Moloney, two from play and another from a free. And they may well have had another goal 11 minutes from time when after doing all the hard work Boherlahan's Orla O'Dwyer lost control of the ball with a gaping net in front of her.

This was a great all-round team performance from Tipp who will look forward to another tilt at the top table and senior football next year.

The defensive unit worked tirelessly all day led by team captain Samantha Lambert with goalkeeper Fitzpatrick pulling off one vital save early in the second half with the game in the melting pot.  Upfront, besides the triumvirate of Moloney, McCarthy and O’Dwyer, Ava Fennessy, Angela McGuigan and Caoimhe Condon all played their parts on a great day at headquarters for Tipperary.