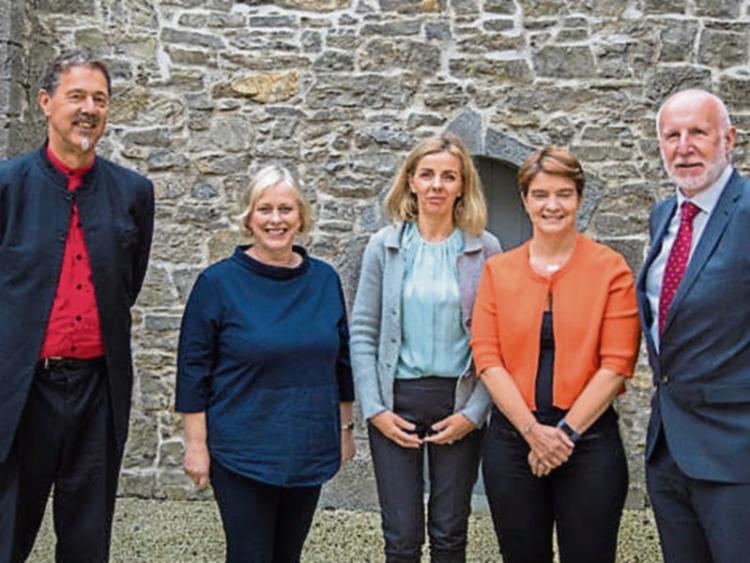 The intriguing life of the 10th Earl of Ormonde, Black Tom Butler, his connection with Queen Elizabeth 1 and Anne Boleyn and his family's role in the bloody power politics of 16th Ireland and England is now being told in a new accessible way at Carrick-on-Suir's Ormond Castle.

A €270,000 interpretation scheme in the Castle's exhibition and audio-visual rooms tells the story of the Tudor manor's origins and the Earl who built it for Queen Elizabeth 1 through animated films, inter-active digital books and an exhibition of reproduction Tudor era paintings and tapestries.

The interpretation scheme has been in place at the castle since earlier this summer but was officially launched last Wednesday by OPW Heritage Commissioner John McMahon and Fáilte Ireland's Product Development Director Orla Carroll.

It was announced at the ceremony that the scheme's two animated films won the runner-up prize in the Heritage Motion category of the European Museum Academy Awards in Slovenia the previous Friday, September 20.

The seven-minute long films are done in the style of John Derrick's 16th centurey woodcut illustrations of the Elizabethan conquest of Ireland. One film centres on Elizabeth Berkeley, Black Tom's first wife, who reputedly left him over his devotion to Elizabeth 1.  The other is about Black Tom and covers his battles with the Earl of Desmond and close relationship to the Virgin Queen.

Over in the exhibition room, there are two inter-active digital books detailing the story of the castle and the great Tudor and Butler characters associated with it as well as the turbulent  wider history of the period. The films and inter-active books can be viewed and read in German, French, Spanish, Italian, Polish, Chinese and Irish sub-titles and translations as well as English.

They are complemented by two newly commissioned Belgian tapestries and a series of reproduction paintings of the main Butler and Tudor figures connected with the castle.  One of tapestries depicts Elizabeth Berkeley, Countess of Ormonde with the castle and other scenes from the period in the background while the second displays the Butler family tree and the family's connections with the House of Tudor and Earls of Desmond.

Mark Leslie of Martello Media, the Dublin company that teamed up with Cork exhibition design consultants  Makedot to create the interpretation scheme, said Ormond Castle's intreptation was an extraordinary project for him to work on. He   revealed the success of the scheme's animated films at the European Museum Academy awards.

"As someone from the North, I had dimly heard about Ormond Castle. I was blown away to see that this great Elizabethan mansion had survived from one of the most violent periods of our history. "

Mr Leslie, whose company has also done interpretation schemes for the GPO and Guinness Store House, compared  the history of Ormond Castle to a plot from hit tv series  Game of Thrones, The Tudors or The Other Boleyn Girl novel and film.

He said the "extraordinary love triangle" involving Black Tom Butler, Elizabeth I and Elizabeth Berkeley deserved to be made into a Hollywood movie starring Colin Farrell, Saoirse Ronan and Catriona Balfe.

Mr Leslie paid tribute to the team of Irish talent involved in the project. He mentioned the illustrators who managed to match the style of John Derrick's woodcuttings.  It was the first animated Irish movie where the first artwork was done 500 years ago, he quipped.

The films were directed and animated by Luke Leslie, written by Mark and Leah Leslie and the storyboard artist was Matthew Shiell. The illustrations were done by Brian Gallagher, Alan Dunne and Holly Ingram while the horse rigger was Matt Kavanagh and horse animations were the work of Iván Pais Nieto

The tapestries were also Irish designed.

The interpretation scheme was funded through Failte Ireland's strategic partnership with the OPW and  Department of Arts, Culture & the Gaeltacht.  It is part of a €16m investment by Fáilte Ireland in 18 key OPW projects aimed at enhancing the visitor experience at key locations in the country.

This is the first phase of Failte's Ireland's funding investment in Ormond Castle.

Failte Ireland's Project Development Director Orla Carroll said research showed international visitors really want to find out about our heritage. She welcomed the new interpretation scheme for telling the story of Ormond Castle to those tourists. She said Ormond Castle was a key part of Ireland's Ancient East touring region and it was important to develop clusters of  heritage sites for people to visit that  will encourage them to stay in an area overnight.

OPW Heritage Commissioner John McMahon congratulated the teams at Martello Media and Makedot for the interpretation scheme they created. He suggested the OPW may engage in further discussions with Tipperary Co. Council about making the castle more visible to the public  in the town. He also  indicated the OPW is  in discussions  with the Department of Culture, Heritage & Gaeltacht about how to best recreate the castle's historic  gardens - the next investment project planned for the castle.