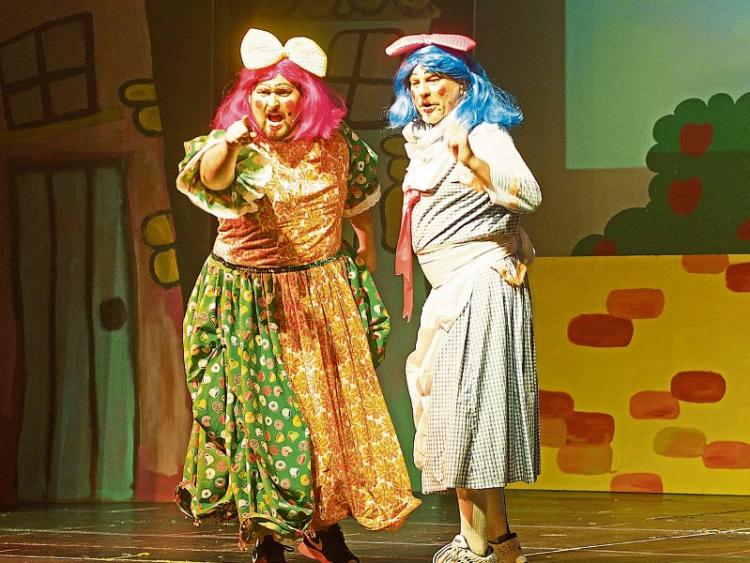 The thunderous farting of the Ugly Sisters in Carrick-on-Suir Musical Society's autumn panto, Cinderella, was enough to fuel a power station but instead produced a highly infectious laughing gas that convulsed the audience in stitches.

The slapstick farting scene played with perfect timing by Audie Murphy and Deckie Smith-Robinson as the panto dames Concepta and Consumpta,  was one of the many highlights of a show that was a glorious mix of comedy, love story, song and dance.

Cinderella, which finished its five day run at the Strand Theatre on Sunday, was a welcome traditional straightforward version of the popular fairytale retold with the help of an eclectic mix of 1980s and current pop hits with a few music theatre numbers thrown in. Great credit is due to the directors Liam Butler and Sandra Power and their production team for the brisk and smooth pacing and direction of the show.

The pantomime was an outstanding showcase of the talent of the Musical Society's youngest members from four year olds to young adults. Kayleigh Cronin-Carroll was a natural as Cinderella, her first lead role for the Society.  She displayed a beautifully clear singing voice in her solo "We Found Love" and in her other performances. The singing  of Freddie Doyle as Prince William was equally impressive in his  rendition of the Backstreet Boys song "I Want It That Way".

Another young Society star, Patrick Walsh, gave a standout acting and comedic performance as Cinderella's gormless but loyal best friend Buttons. He had one of the most demanding roles in the show but carried it off with the assurance of a veteran stage performer.

A total of 140 children and teenagers from the Society's Academy of Performing Arts took part in the panto, divided into two casts  playing alternate shows .  They were a delight to watch in their song and dance numbers ranging from the youngest kids singing "Trip a Little Light Fantastic" from Mary Poppins to Pixie Lot's pop hit "All About Tonight" performed by older members of the Academy.  The chorus comprising a mix of local Transition Year students and Society members were the busiest cast members of the show and they pulled off their dance routines with ease and aplomb.

Indeed, there was great audience participation incorporated into the show with cast members frequently engaging the audience in classic panto back and forth chants topped off with an end of show audience dance-off routine led by Dandini and Buttons.

And in true panto tradition, dotted through the show were references and jokes about current news events and celebrities. Donald Trump, Conor McGregor, Marie Bailey and the swing, Love Island and the Tipperary and Kilkenny hurlers all made appearances or got a mention. There was even a Brexit joke.

Overall, Cinderella was a thoroughly enjoyable two and a half hours of entertainment for kids. And  for adults  it was  most welcome escape from the Brexit  melodrama in London.

This review and more photos from Carrick-on-Suir Musical Society's production of Cinderella are published in this week's edition of The Nationalist now in shops.