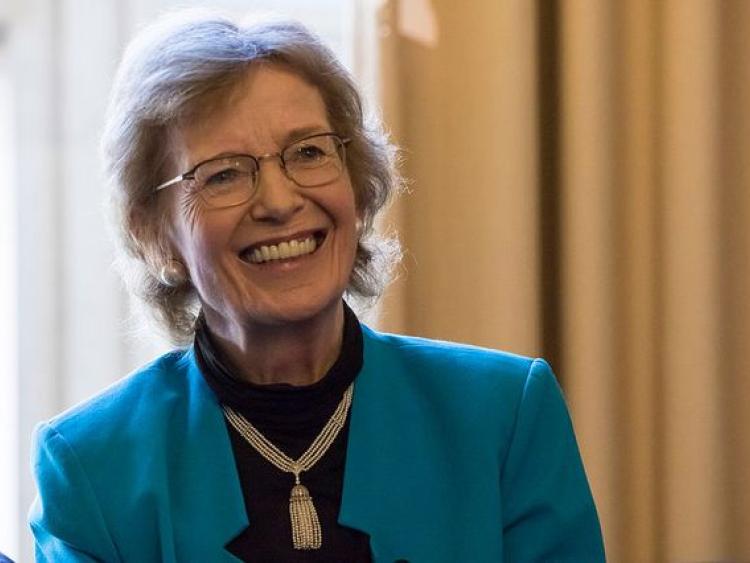 Twenty nine years to the day of being elected as the first female president of Ireland Mary Robinson was presented with the 2018 Tipperary International Peace Award in Tipperary town this afternoon.

The Chair of Elders and former UN High Commissioner for Human Rights receiving the award in recognition of her efforts in ensuring that the needs of the poorest and most vulnerable are addressed on the global stage.

Mary Robinson said she was humbled and honoured to receive the award following such a distinguished list of names among the former recipents.

She said there was something very special about the Tipperary Peace Award and told the audience in the Excel theatre that she was genuinely pleased to be given a guard of honour at the entrance of the building by United Nations veterans as she was so proud of the role played by the defence forces in peacekeeping all over the world.

Martin Quinn, Tipperary Peace award Committee said Mary Robinson had proven herself to be a principled and transformative leader on a national and international scale since she became an independant senator.

He paid tribute to Mary Robinson for playing a pivitol role in shaping modern Ireland.He described the recipient as a tireless crusader for inclusivity, equality and peace all over the world and a person who championed the poorest and most vulnerable all over the world.

“Tipperary can be very proud of the important role played on the national/international stage by Tipperary Peace Convention. The recipients over the 35 years since the convention was founded are all extraordinary people who have all gone that extra mile in the pursuit of peace and reconciliation and Mary Robinson is certainly no exception to the rule” he said.

A host of dignitaries were in attendance including ambassadors from 20 foreign embassies accredited to Ireland, representatives of all political parties, Chief of Staff of the Defence Forces along with representatives of 1 Brigade, Air Corps and Irish Naval Service.

There was also be representation from all the main churches and many community bodies and organisations and from Amnesty International and the International Institute for Environment and Development.