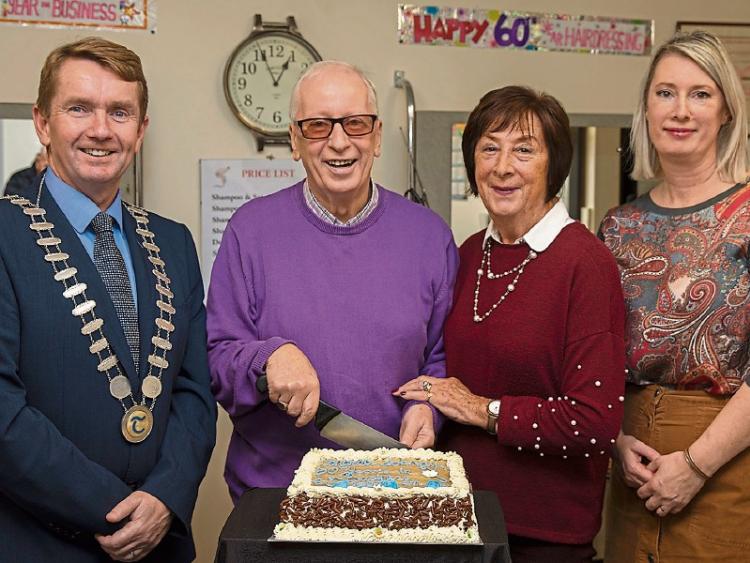 Well-known hairdresser Johnny Delahunty is celebrating on the double.

He opened his hairdressing salon in Mitchel Street, Clonmel 50 years ago this month; and, remarkably, he will have been cutting and styling hair for all of 60 years at the end of December.

To mark these very special anniversaries, a surprise party was held last week.

The salon was decorated with balloons and banners, a cake was cut and glasses of prosecco poured.

People from neighbouring businesses dropped in to wish Johnny well, as did Michael Murphy, Cathaoirleach of Tipperary County Council.

Johnny started out as an apprentice barber with Ronnie O’Mahony - coincidentally, also in Mitchel Street - at Christmas in 1959, at the tender age of 13, just a few weeks short of his 14th birthday.

“You wouldn’t let a child out at that age nowadays”, he says!

He stayed with Ronnie O’Mahony for ten years, learning the trade until November 1969 when he established his own salon in a nearby premises.

Johnny’s sister Maeve ran the business for a year when he moved to London. While there, he had the opportunity to open and run another salon but returned home in September 1970.

He built up the business over the years and moved to his present salon in 1990.

Over the years Johnny has cut the hair of several well-known personalities including Dickie Rock, Colm Wilkinson, Babs Keating and Jimmy O’Dea.

He also recalls, as a 16 year-old, being sent to the Medical Missionaries (now Melview) to give Civil War and War of Independence veteran, and Fianna Fail politician Dan Breen a haircut.

Recalling his “huge mop of white hair”, he says that Dan Breen gave him five pounds for his troubles, at a time when a haircut cost half a crown.

Despite reaching these major milestones, Johnny says he has no intention of retiring, and will continue to operate from Thursday to Saturday of each week.

He’s very grateful to his many loyal customers, as well as his wife Bernie and four daughters - Jacqueline, Siobhan, Tracey and Emma - “for putting up with me!”