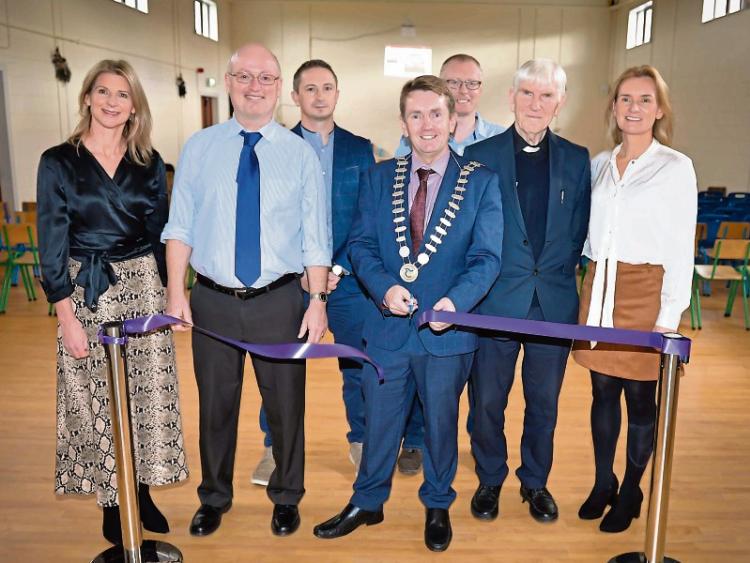 The official opening of the  new sports and recreation hall at Powerstown National School was performed by local councillor and County Council chairman Michael Murphy.

Parents, members of the local community, staff, sponsors, pupils and past pupils all gathered together for the opening ata the Clonmel school.

The ceremony commenced with music by the school band followed by a prayer service led by  Fr. Peter Ahearne,  who expressed his deep gratitude to everyone who has helped in any way with the development.  “

Parents Council chairperson Helen McGarry paid tribute to all who were involved in making the building possible and she commented that the benefits to our children from this hall are immeasurable.

They will allow the children nurture  their sporting and creative talents and will contribute in the promotion of a healthy life style for all children and  a habit of exercise, participation and development for a life time.

She eloquently concluded her speech with the words ”May the laughter of children resonate throughout this hall for many years.”She thanked the parents, staff, the businesses in the area and the community.

School principal  Eugene Fogarty thanked all who donated and fundraised for the school hall.

Mr Fogarty, said that “years of perseverance, hard work and generosity by many people had brought the school to this important day”.

The Board of Management along with the Parents Council were tasked with raising all the funds for the project as funding by the Department of Education was not being offered.

Whilst the majority of the funding for the hall was provided by the Board of Management following  years  of prudent financial management, the sum of €100,000 was needed to complete the building through fundraising undertaken by the Parents Council.

Mr. Fogarty spoke about the Register of Patrons which will contain details of all the donors who kindly contributed to the hall. The final version will be available in June 2020 as contributions continue to come in to assist in the next phase of fitting out the hall with equipment, a stage and seating.

Cllr Michael Murphy was full of praise for the school and its role in the local community.

He said the provision of the wonderful new sports and recreation hall had been a long-term objective of the Board of Management and Parents Council and it was great to see that coming to fruition.

He congratulated  Eugene Fogarty, Fr. Peter Ahearne, the Board of Management, the Parents Council and the teachers on this success.

He extended to all the students and staff  his best  wishes for many years of enjoyment in their lovely new facility.

He welcomed Cllr Garret Ahearn, Mayor of Clonmel and thanked both Oliver McGrath and Bulmers Ltd through Billy Acheson for their generosity in making land available to the school over the years.

Mr. Murphy announced that he has a small budget from the Municipal District which supports projects from an economic, social, educational, sporting, cultural and environmental perspective.

He has chosen Powerstown National School as his lead project and he approved a contribution of €10,000 towards the next phase of the project. He performed the official ribbon-cutting and congratulated all.

The children performed a selection of song, dance and theatre for the audience, finishing off the ceremony with the school anthem “Mol an Oige”, a song written and composed by teacher  Fergus Flynn.