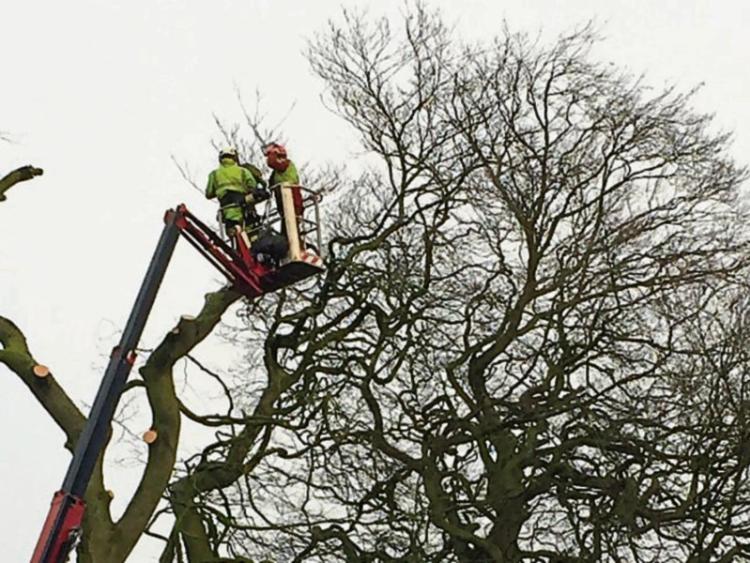 Tree surgeons at work in Saint John the Baptist Cathedral

Ancient Beech trees which have covered the grounds of Cashel’s St John the Baptist Cathedral in John Street have had to be cut down as they posed a risk of falling on parishioners.

“There has been some interest shown and a few objections made by members of the Cashel community to the removal of three prominent trees from the Cathedral churchyard,” stated the Very Reverend Gerald G Field.

“The Dean and Church Wardens of the Cathedral are very aware of the concerns of those who objected to the removal of these trees and it is regrettable to all concerned, not least those who worship regularly in the Cathedral, that this course of action has had to be taken by the Dean and the Select Vestry of the Cashel Union of Parishes.

“During a storm earlier in the year branches from these trees came down and blocked Agar’s Lane. Thankfully no one was injured, and none of the gravestones or monuments in the grounds of the Cathedral were damaged. However, as a matter of urgency a safety inspection was made of the trees by a tree surgeon and all three were condemned.

“Action needed to be taken to avoid the possibility of injury to a member of the public or damage to the Cathedral should one of them have fallen. There are protocols that have to be adhered to when it comes to removing trees, and particularly when they are on the site of a national monument.

"Permission for their removal was sought from the Diocesan Council of the Church of Ireland Dioceses of Cashel, Ferns and Ossory, and an inspection was undertaken by Tipperary County Council before their authorisation was received allowing for the removal of the three trees on the grounds of health and safety.”

The Church of Ireland’s policy regarding these matters is that for every tree that is removed at least two trees have to be planted somewhere within the Union of Parishes concerned. The Dean and the Select Vestry of Cashel Union will be seeking advice as to the best species of trees to plant, and the best location for planting at least six trees.