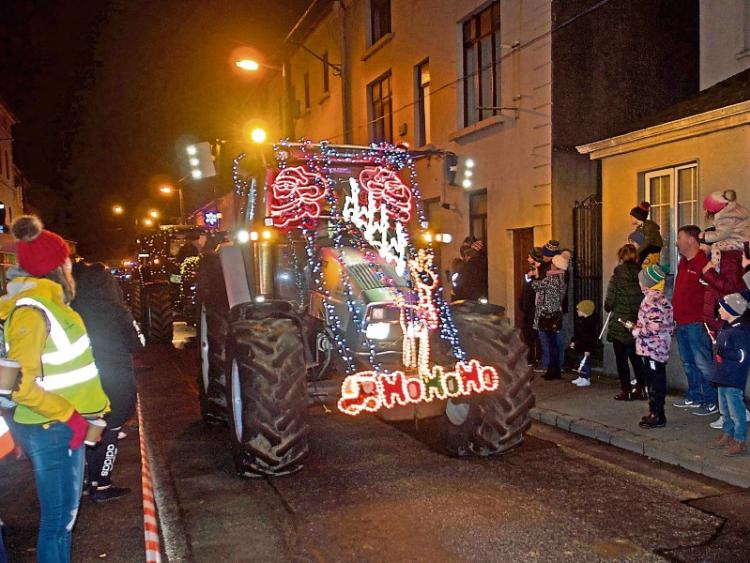 More than 100,000 fairy lights carried by a fleet of 40 tractors dazzled the night sky in Carrick-on-Suir last Saturday evening.

Thousands of visitors from far and wide lined the Pill Road and town centre streets to watch the massive illuminated convoy that was the  Christmas Tractors of Carrick Parade.

The seventh annual pagaent of Massey Fergusons, John Deeres, Fendt and New Holland tractors decorated from roof to wheels with Christmas lights was the biggest yet, according to organisers the Crop Cruiser tractor drivers.

Crop Cruisers spokesperson Ciara Power believes this year's parade surpassed the world record for the most illuminated convoy set at the event three years ago though they haven't sought official recognition for it from the Guinness Book of Record. “It's something we should look into,” she said.

Ciara's husband drove his tractor covered in 10,000 lights in the parade for the fourth year in a row Tractors and drivers from as far as Cork, Clare and Limerick joined locally based participants from counties Tipperary, Waterford and Kilkenny in the parade.

Fortunately, the weather stayed fine for most of the event, which began at 5.30pm with the junior tractors parade featuring between 40 and 50 children pedalling toy tractors. They set off from Main Street Car Park, pedalled down Main Street and out the West Gate.

They then turned back across the top of Pearse Square, down William Street   and New Street into the New Street Car Park.

The main parade of tractors set off from opposite a business park opposite Sean Kelly Sports Centre on the Pill Road at 6pm. Santa and Mrs Claus were special guests on one of the leading tractors.  The fleet travelled into town, turned up New Street, travelled down Main Street,  Kickham Street, returned to the N24 and swung back up New Street. The tractors finished their journey at New Street Car Park where there were Christmas stalls, amusements and a Santa's grotto for children.

Ciara Power said it was great to see the Christmas Tractors of Carrick Parade was still pulling large numbers of visitors despite similar parades have sprung up in other towns around the country.

“Next year we hope to do something a bit different. We will still have the tractors and all the lights but we hope to organise something extra. Watch this space.”

Check out more photos from Carrick-on-Suir’s Christmas Tractors Parade in the print edition of The Nationalist now in shops.