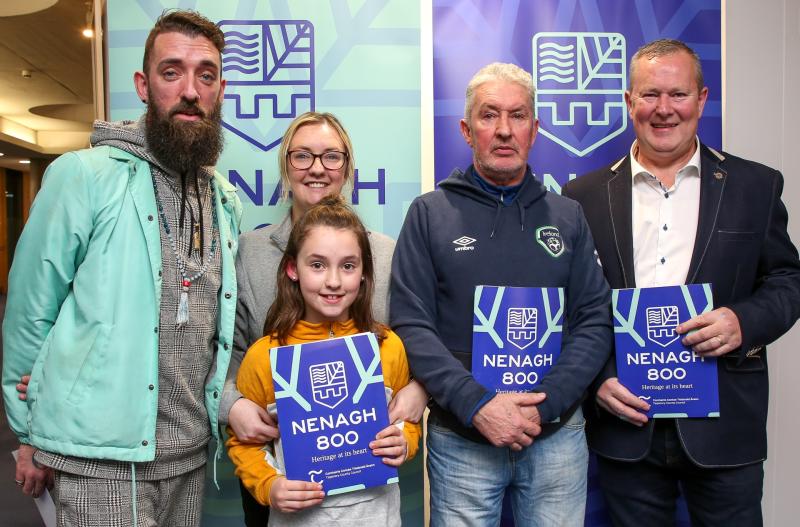 Nenagh is set to showcase all the positives the town has to offer as it begins a year-long celebration of its 800-year-old castle.

A packed programme of events was outlined by district adminstrator Rosemary Joyce at the official launch of Nenagh 800 in the town’s Civic Offices last week.

“Nenagh is a stranger’s paradise and a gateway to Ireland’s Hidden Heartlands, said Ms Joyce.

Despite all its history, the town was about its people, she said, and “we can be part of the history of the town”.

She revealed that Nenagh 800 had recently launched a campaign to reach out to the town’s diaspora, and within six days of the site going live she had responses from all over the world, including America, the UK, Australia, Canada, France, Spain, and, of course, Ireland.

“The very first response came from Hawaii,” she revealed.

As well as its past, Nenagh was looking to the future with developments such as those to be undertaken at Arrabawn Co-op, Sheahan’s store and the whole Martyr’s Road development, First Data, now Fiserv, at Stereame, and LMC on the former Procter and Gamble site.

“We can’t stand still and we need to develop for the future so Nenagh can remain a vibrant place where people want to live and work,” she said.

Ms Joyce also referred to the proposed work at Emmet Place and Banba Square under the Nenagh Traffic Management Plan, as well as work on the old gaol and the medieval garden in the castle grounds.

“The restoration of the town’s historic quarter is a key priority for us,” she said.

Ms Joyce said the council was also always looking at ways to help the local business community and she had a particular welcome for Nenagh’s longest operating shop owners - Joe and Angela Starr - and pointed out that Slatterys of Nenagh was celebrating its 75th anniversary this year.

Ms Joyce also outlined some of the events that will take place throughout the year, including an exhibition of memorabilia from the family of Olympic champion Bob Tisdall, some of which had never been seen in public before, in February.

Each month has been given a designated theme, running from crime and punishment in February to, religion and education in April, agriculture in August, science in November and finishing in December with a celebration of people in Nenagh.

Launching the programme, Cllr Joe Hannigan, Cathaoirleach of Nenagh Municipal District Council, said the year was a “tribute to the men and women who made Nenagh”.

Describing the castle as a “distinguished landmark that has stood the test of time, Cllr Hannigan encouraged people to get involved in the year as there was “something for everyone”.

“Let’s put Nenagh on the map,” he said, before thanking those on the Nenagh 800 committee.

OPW conservation architect Flora O’Mahony, outlined how the castle had been brought back to public use from the time it was handed over to them in 1966 to when work began on it in 2008 and it’s official opening in 2012.

Nenagh Castle tour guide Kevin Whelan revealed that over 110,000 people had visited the castle since it opened to the public, with the attractions being particularly loved by American visitors.

He was delighted that it was being used by various local groups such as active retirement groups, school groups and that many families used the castle grounds and castle garden.

“We have a beautiful hub in the town with the castle, the gaol, arts centre and the courthouse all within 100 yards of each other,” he said.

Nenagh Arts Centre director Eva Birdthistle told the launch that last July, a competition to find a new song for Nenagh was launched, with internationally renowned singer / songwriter Luka Bloom being asked to adjudicate the contest.

Ms Birdthistle said that Luka Bloom had described the song as “the best thing by anyone that I have heard this year”.