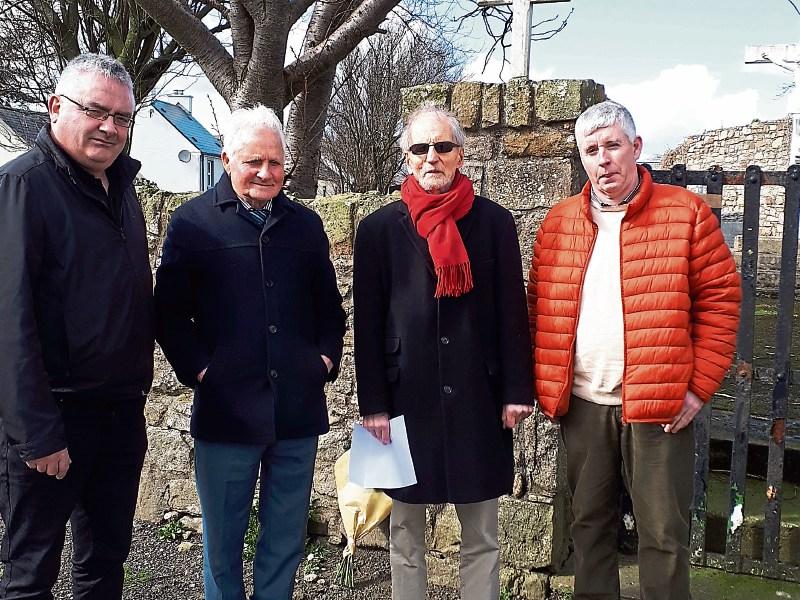 At the commemoration in Toomevara of two RIC constables murdered by the IRA in 1920, from left, Con and Niall Healy, grandnephew and nephew of Charles Healy; Brendan Lynch, author and speaker, and Sea

‘The consequences of violence were misery and destruction on a scale never previously seen in our country. Thousands killed, property destroyed and then, more hatred and intimidation in an equally unnecessary and fruitless civil war,” he said.

Relatives from Cork and Galway attended the commemoration of the unarmed constables, Charles Healy from Pearsons Bridge, Bantry and William Rocke of Kiltormer, Galway, both aged 26.

They were killed as they left evening Devotions, the first killings to take place outside a church in Ireland.

After thanking Bantry Historical Society for their assistance, Mr Lynch said: “The deaths of Charles Healy and William Rocke were as unnecessary as they were cowardly and cruel. As the first spring buds appeared on the trees around us, they were shot down before they had a chance to reach their own full lives. The shootings were swept under the carpet, as so many others from that period have been. As if they had never happened. But, they did and we should be ashamed that they did, particularly in a parish with such a rich history of culture and learning.”

Mr Lynch pointed out that before he went to Iona with Columba, St Odhran founded a monastery and school in Latteragh. Under the Devil’s Bit, the MacEgans of Aghnameadle had a college in which scholars from the four corners studied everything from history to law and poetry.

“The most tragic day in Irish history was when gunmen hijacked nationalism. A self-righteous minority launched an armed rebellion, without a thought for the consequences. Like all dogmatists and zealots, they saw the world in black and white,” said the author.

However, said Mr Lynch, life was not black and white. Goals were reached by patience, dialogue and hard graft.

“The men who did most for this country were men who never fired a shot. Daniel O’Connell, Charles Stewart Parnell and John Redmond who, after years of dogged campaigning, finally secured Home Rule,” he said.

Mr Lynch said that violence opened a Pandora’s box of death, destruction and intimidation never previously seen in our history.

“Thousands were butchered, property destroyed. Then followed the horror of a civil war, whose legacy of hatred and suspicion permeated Irish life for generations. Followed by four decades of economic stagnation, during which over a million poor souls emigrated to England, including so many from this village,” he said.

‘That is what the gun did to our lovely country. But, like the story of the king’s suit, even now, so few have the sense or courage to acknowledge this.

Without this violence, the men they remembered on Sunday would have lived out their full lives, their families would have been spared the sorrow of death, he said.

“As would the equally young Devaney brothers, James and Thomas, killed by the other side, who lie just a few yards from us inside the Abbey,” he said.

He hoped that the presence of people and Sunday’s ceremony would restore Charles Healy and William Rocke to their place in collective memory and in Irish history.

“I hope that some day a modest stone will beerected here to their memory. It will not bring them back to life, but it should help lift the cloud which has overhung the village since. Ar dheis Dé go raibh a n-anamacha,” he said.