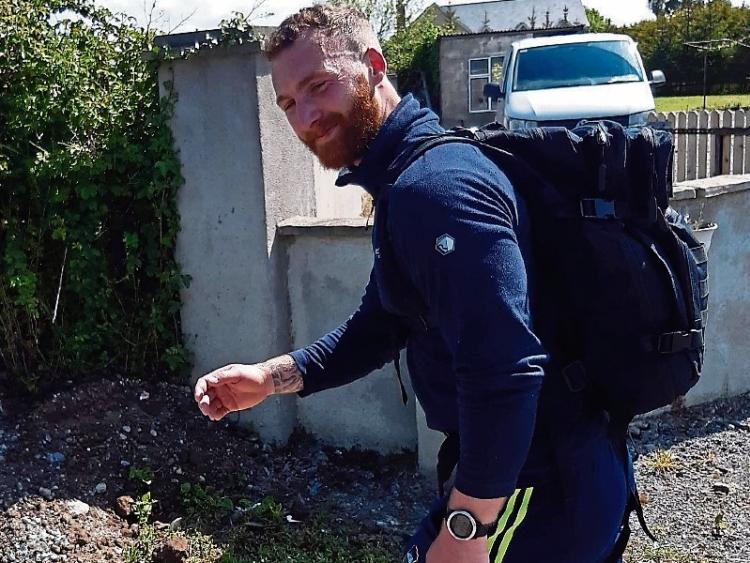 Lee Lanigan from Ravenswood, Carrick-on-Suir during the gruelling 50km run he undertook with 50lbs strapped to his back last Saturday. His epic run has raised nearly €10,000 for Pieta House

The Covid-19 pandemic forced suicide prevention charity Pieta House to postpone its Darkness Into Light fundraising walks nationwide but it didn't stop the people of Carrick-on-Suir from putting their best foot forward to raise nearly €20,000 for the cause last weekend.

Three separate walking and running fundraisers complying with social distancing guidelines took place in Carrick-on-Suir between last Thursday and  last Saturday, the original day the Darkness Into Light was scheduled.

And so far they have collected just over €19000 for Pieta House's counselling services for people with mental health problems.

The most arduous  event was a 50km run completed by Lee Lanigan while carrying a 50lbs weight on his back. His efforts have so far raised €9377  for Pieta House and he is keeping the GoFundMe page he set for the challenge open for a few more days in the hope his fundraising tally can reach €10,000.

It took the owner of BodyWorx Gym in Carrick-on-Suir eight hours to finish the ultra-distance run over local roads and along Blueway walking route within 5km of his home at Ravenswood, Carrick-on-Suir.

Last Saturday was the hottest day of the year so far and this greatly added to the physical difficulty of the challenge for Lee.

He said he started the run at 4am to try and avoid the hot temperatures as much as possible but the mid-morning heat last Saturday was still very hard to run through.

“My legs held up well but my feet were destroyed afterwards.. The heat, the blisters and the weight on my back were the most challenging. I stopped for half an hour middway through for a rest and even putting back on  the three and a half stone weight was a killer.”

Lee enjoyed a well earned bath and rest after finishing the run outside his home shortly after noon where he was welcomed by members of Carrick-on-Suir's Darkness Into Light Committee.

He did the 50km charity run in memory of his late mother Sharon, who died nearly 11 years ago following a battle with depression. For him, the 50lbs weight he carried on the run symbolises the invisible weight people suffering from depression carry around with them daily.

He paid tribute to the more than 400 people who donated money to the GoFundMe page called  “50km with 50lbs for Pieta” he set up for the fundraising campaign.

Their efforts raised €2500  for Pieta House.

Siobhan said she  takes part in  the Darkness Into Light walk every year  in memory of her late son Sean, who died by suicide on May 1 four years ago. The first walk she did took place just a week after his death. She felt compelled to walk the route again this year even though the event is  postponed due to the pandemic.

She said Bido and Sharon have also lost sons to suicide while Ann lost a brother to suicide.

Siobhan said they observed social distancing guidelines during the walk, which they started from the Greenschool at 3.50am and finished just after 5.10am. Members of her family marked out the word Hope with tea lights at Sean Healy Park in Carrick where they finished.

“I would just like to thank everyone who donated to our walk. It was an amazing response. We are really delighted with it,” she  told The Nationalist.

She  appealed to  people  in need of Pieta House's services   that there is always hope in life and to try and look for it and grasp hold of it. “We don't want anyone else to be walking in our shoes,” she said.

A large contingent of members and supporters of St Molleran's GAA Club iCarrick-on-Suir, meanwhile, raised €7213 for Pieta House by taking part in a “How Far Will You Go 4 Pieta” 48 hour walk/run marathon that started at 5.30am last Thursday and finished at 5.30am last Saturday.  The event was organised by the Club's secretary Sean Reade.

Participants completed a 30 minutes walk or run on their own or with family members in allocated time slots over the 48-hour period.

St Molleran's GAA Club estimated their volunteer runners and walkers covered in excess of 900kms over the two days.

“There was great community spirit. Even though everyone did the walk or run on their own, they all felt they were part of a big group working together,” said St Molleran's GAA Club treasurer Gillian Power.

Mary Power of Carrick-on-Suir's Darkness Into Light Committee said the Committee was  delighted with the huge amount of money raised in the past week  for Pieta House   in Carrick-on-Suir.   On behalf of the Committee, she thanked everyone who walked, ran or donated money to the cause.

“You couldn't credit that such a small town like Carrick-on-Suir could raise so much money,” said Mary