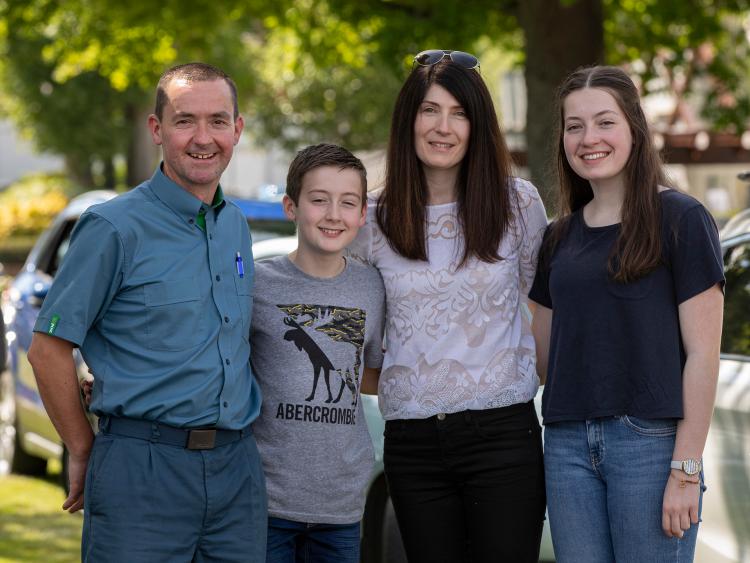 The sense of community, of helping one another to cope in unprecedented times and the intrinsic value of being surrounded by good neighbours was palpable on the beautifully manicured lawns of Hotel Minella in Clonmel as coronavirus cocooners gathered to enjoy a wonderful occasion.
"Crooning for Cocooners" was a drive in concert designed to give a lift to people who were marooned in their homes for weeks on end unable to meet their families,their neighbours or friends due to Covid-19 .
“It was like getting out of jail after being locked up for the previous two months” said ninety year old Mary Kerr who was thrilled to get an invitation to the concert. 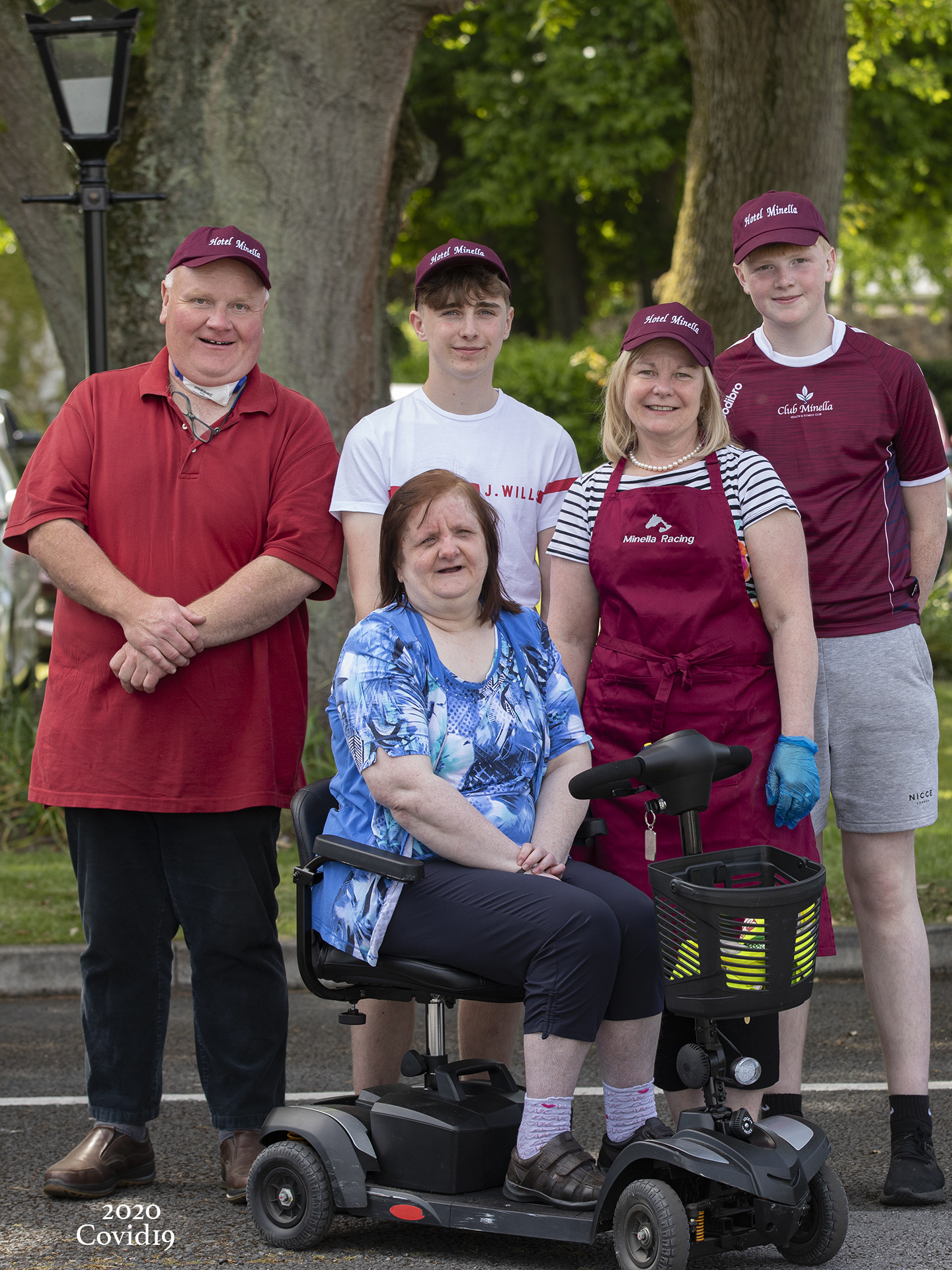 John and Elizabeth Nallen and the Hotel Minella team hosted the concert for the cocooners on postman Davy Hogan's Harney's Cross postal route on Tuesday of last week and the cocooners were delighted with the chance to dress up, go out and have some fun.
Hotel Minella looked splendid in the glorious sunshine as car after car arrived to park up in front of a mobile outdoor stage waiting for the entertainment to start. Country star Louise Morrissey and local entertainers Donal Lyons and the Barry family were on the bill as the cocooners showed their appreciation with an enthusiastic beep of the horn after every tune.
It was a magical afternoon, an experience to cherish.

“”It was wonderful. I live on my own,I love going out for a walk and I could not go out of the house for two months.What a thrill it was to go to a concert, see my neighbours and wave to them” said Mary Kerr. 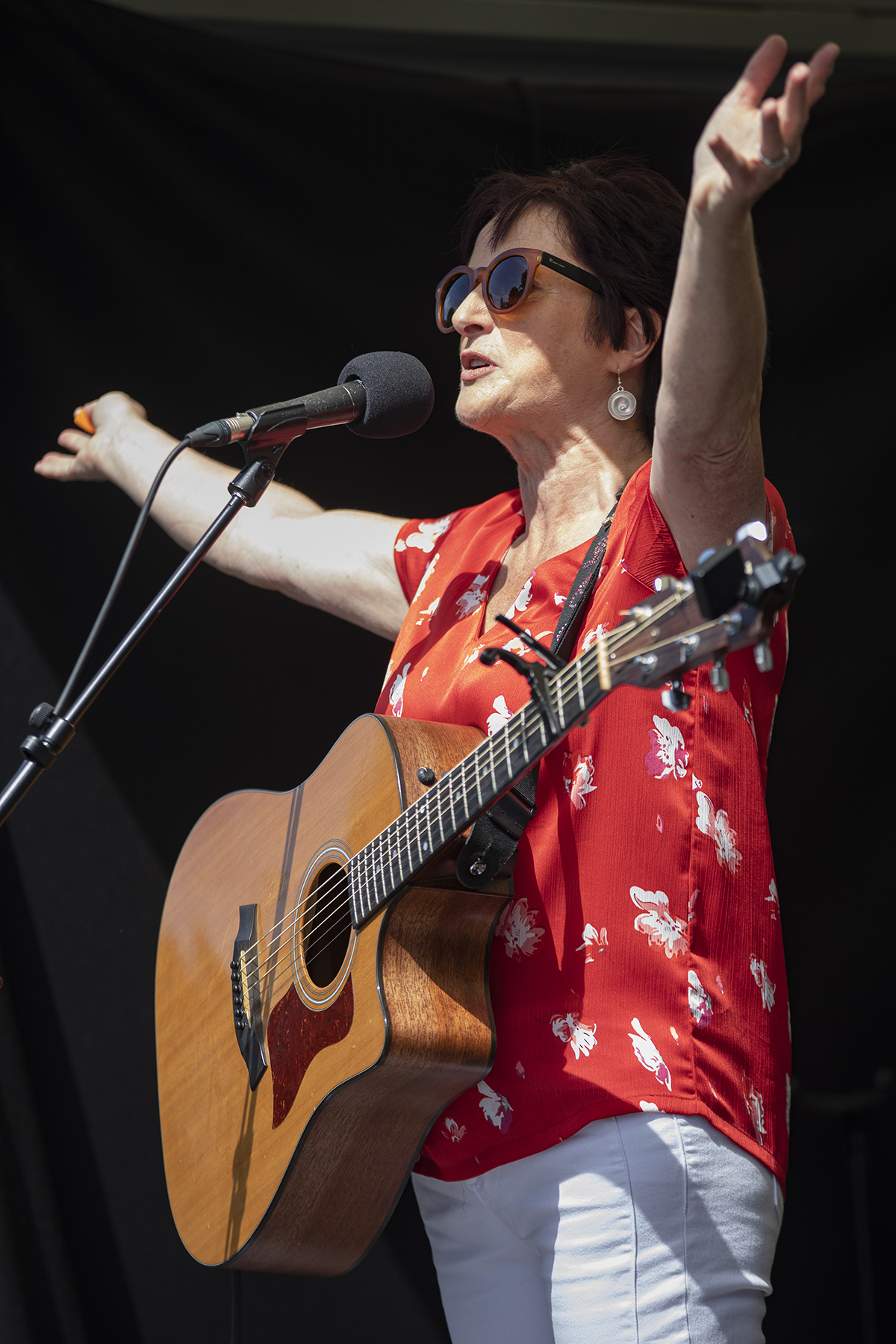 "These are very difficult times, people are going around looking at the ground.We wanted to give people a lift. Postman Davy Hogan was the only person able to meet all the neighbours and keep an eye on how they were getting on and look out for them and we wanted to do something to give people who were cocooning something to enjoy. Davy handed out invitations to the concert to all those who were cocooning on his route" said John Nallen.
The hotelier was thrilled with the response.The demand was so high two concerts had to be put on back to back with sixty cars turning up for the first concert and fifty f our for the second concert.
."It is just fantastic to see the turnout.People who had been cocooning were just mad for something to do" said Elizabeth Nallen.
Willie O Brien, who lives near the hotel, said it was a really enjoyable occasion.
"What a marvellous idea, this is just fantastic for the community" he said."I was cocooning for weeks.Luckily the garden is a reasonable size so I was walking around that . It is great now to be allowed out of the house and to have an event like this brings all of us cocooners together again" said Willie.
Crooning for Cocooners was a particular joy for postman Davy Hogan. 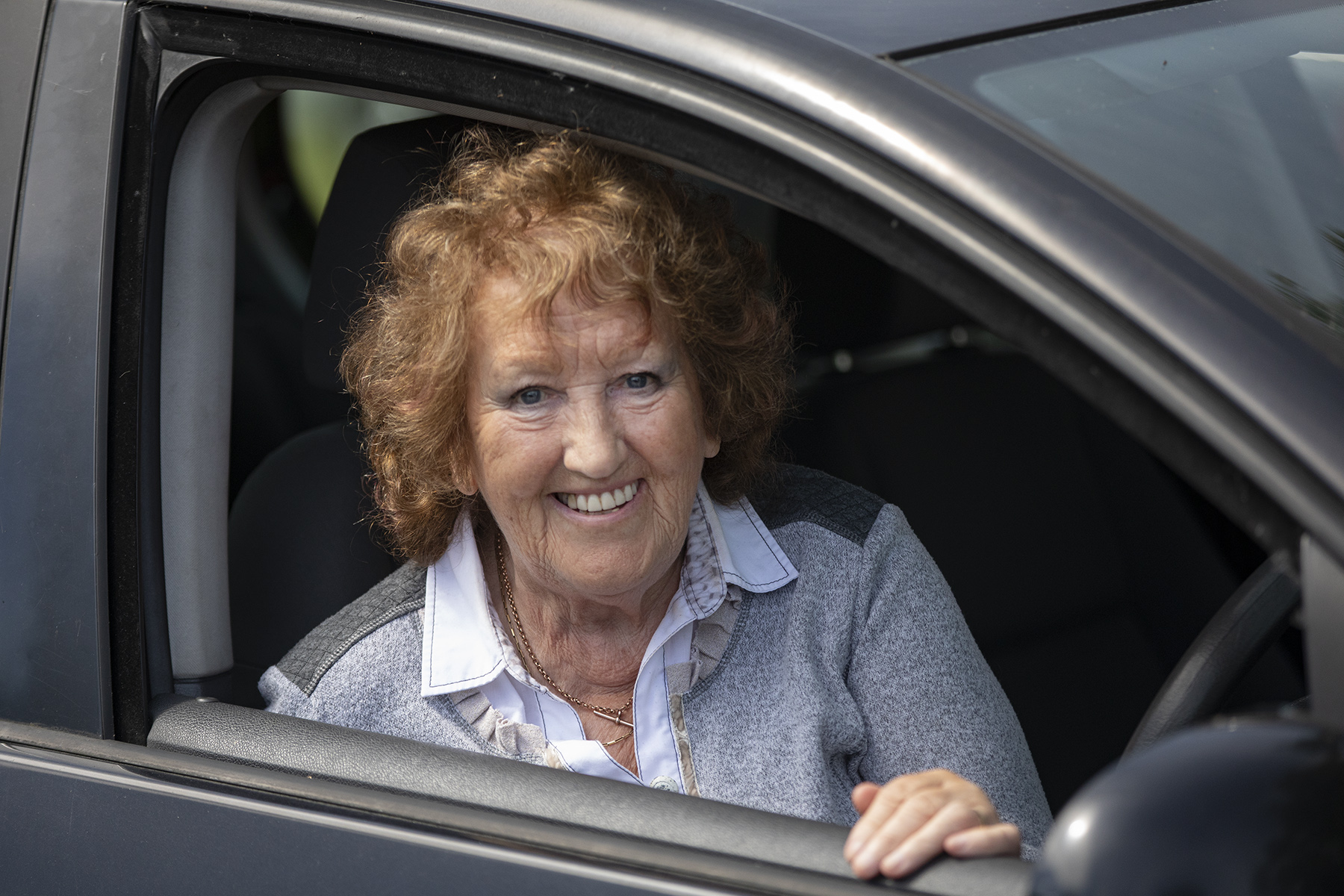 He was delighted to see so many of the people he had called on every day while they were under lockdown in their homes attend the concert
."It was marvellous fo rthem.What a thrill to see them all here.They all had a very difficult time being locked up in their homes for so long. I would have been the only person calling to a lot of them. I would bring them bread, milk or the paper. I called to them at the weekends as well to see if they were all right or if they needed anything. I don't have very young kids so I had plenty of time on my hands , I could give them that time and they appreciated it" said Davy."
“It was very difficult for people cocooning.A lot of them lived on their own , I would stay with them and chat for five minutes and it would mean a lot to them" said Davy.
He said the concert was amazing , not only for the joy of the day but the excitement in the build up.
" As soon as I handed out the invitations there was a gr eat buzz, they were all talking about it , talking about what they would wear and who would be there..It just brought that bit of excitement back into their lives.it was wonderful" said Davy."
“All the people who came in their cars today are neighbours and f riends.While they all had to stay in their cars, they could see one another and say hello to one another for the first time in a long time.It was lovely" said Davy.
“The atmosphere was incredible, you could feel that from the people sitting inthe cars.The applause with the horn blowing was great” said oneof the entertainers Louise Morrissey.

The event was supported by Hotel Minella,Surehaul and Paddy Doheny. Hotel suppliers like Dawn Meats,Martin's Fruit & Veg, and The Apple Farm generously provided items to enable the Minella staff to prepare and hand out food to the cocooners to enjoy when they returned to their own homes.Ber Colclough and Tony Cahill looked after the sound on the day. 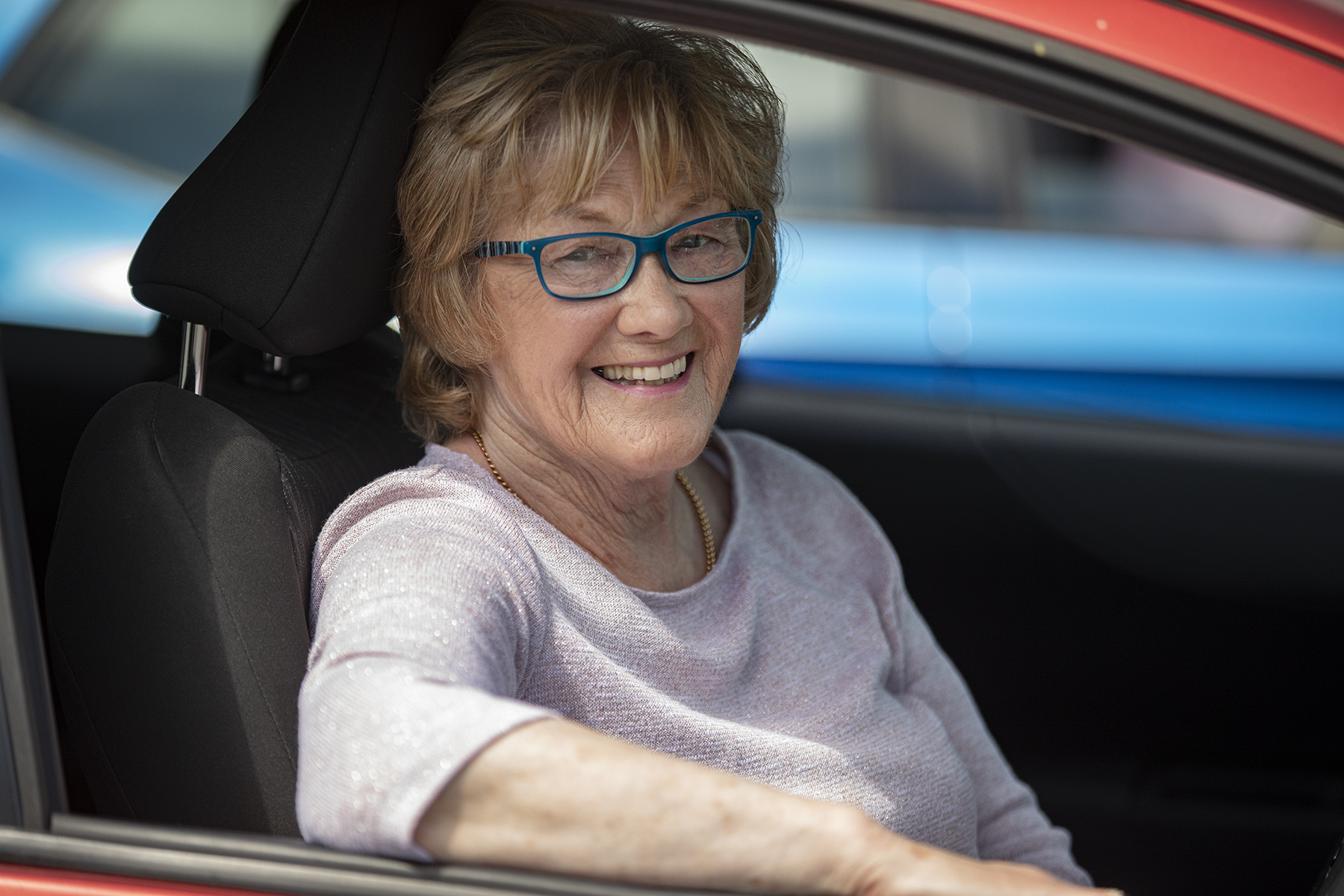