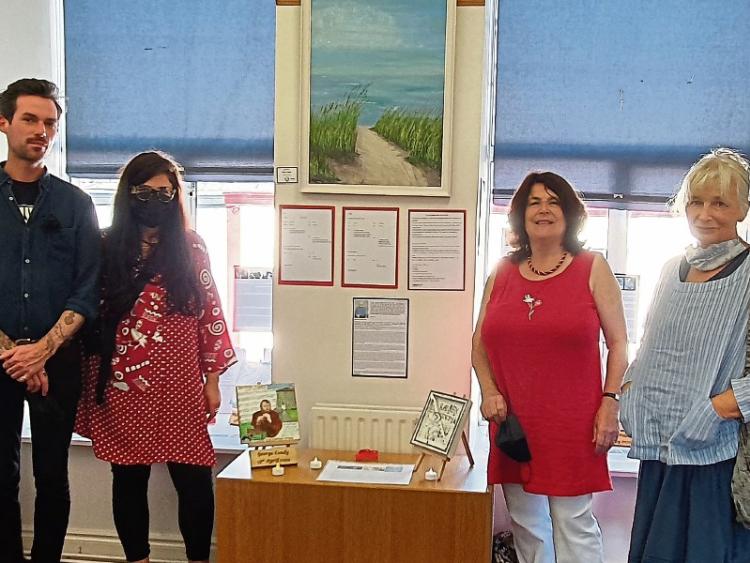 Paintings commemorating people from Carrick-on-Suir and its hinterland who died during the three month Covid-19 lockdown will be erected on a large outdoor cross adorning the back wall of the town’s St Nicholas Church on All Souls Day,  November 2.

This  public art display at the William Street Car Park will be the culmination of the In Ár gCroithe Go Deo public art project started in July to bring comfort and solace to local families bereaved during the lockdown from  March 15 to June 29.

One of the most difficult and heartbreaking curtailments on people’s lives was the restrictions on funerals with only the very closest of relatives able to attend.  Grieving families missed the communal support they  normally receive at the removal, Requiem Mass and graveside from family, friends, neighbours and the wider community.

Linda Fahy, founder of the Tudor Artisan Hub collective of artists, and Margaret O’Brien, who runs the Writing Changes Lives creative writing workshops at Brewery Lane Theatre, instigated In Ár gCroithe Go Deo to give bereaved families the opportunity to publicly celebrate the lives of their deceased loved ones.

In July, they issued an invitation for bereaved families to come forward and also made contact with families through the priests of St Nicholas and St Molleran’s parishes, Bridget O’Keeffe of the Nano Nagle Community Centre and Maria Madden of Carrick Lions Club.

Families grieving the loss of  22 people aged between 39 and 100 agreed to take part.  Linda, Margaret and writer Mary McGrath began a painstaking process of sensitively interviewing each family about the lives of those they  had lost.

“The families were invited to share something about the person who passed away and also what it was like to cope with a bereavement  in the isolation of the lockdown,” Linda explained.

“The information gathered was shared with local artists to create a unique piece of art that reflected the bereaved family’s story about their loved one. The artists also detailed the story behind their painting and how they connected with the deceased person.  Writers were invited to write about the person they were honouring under the theme “Love in Action”.

In all, 45 artists, writers and musicians many from Carrick-on-Suir and its hinterland and some from wider afield worked on the project, which is supported by the Clancy Brothers Music & Arts Festival and Tipperary County Council.

Linda said the restrictions on visiting dying relatives during the lockdown was a big issue families highlighted with them as were the restricted numbers allowed at funerals and the isolating aftermath of the funerals.

“What was positive was the way technology enabled funerals to be viewed by relatives and friends living far away, and the way relatives, friends and neighbours lined the streets as the funeral cortege passed and sent up balloons into the sky.

“Some families, unexpectedly, liked the intimacy of a small funeral.”

The finished paintings and written works for each deceased person along with a a short biography of their lives were unveiled at an exhibition in the Tudor Artisan Hub on Culture Night on Friday, September 18.

To abide by social distancing guidelines, each family was given  a half hour slot to view the exhibition over the day.

Recordings of the written pieces were played in the background as were music composed by musician/ singer/songwriter Gay Brazel, whose daughter Laura is commemorated in the  project; Marian Ingoldsby, daughter of the late Michael Ingoldsby, who is also honoured, and Matthew  O’Tuama.

“It was the most amazing heartfelt, uplifting experience,” recalled Linda, who pointed out that each family was gifted a print of the painting representing their deceased relative’s life, the story behind it written by the artist and two poems by Margaret O’Brien and Mary McGrath,  specially written for In Ár gCroithe Go Deo.

Margaret said  when they first met and interviewed the families, many were in a lot of distress as they recalled the terrible times they had experienced.

She confessed they didn’t quite know what to expect when they unveiled the finished paintings and written pieces to them at the Culture Night exhibition.

“When they came in  there were gasps of recognition when they saw the visual art, when they listened to the recording and read what was on the walls.

“There was a lot of tears but I think they were healing tears.”

Margaret said some of the artists and writers knew the deceased person they were painting or writing about but many others didn’t. Despite this they seemed to really connect with the person they were honouring.

Kilcash based artist Mia Carney said she overcame a bout of  artist’s block she was suffering when she took up the challenge to paint for In Ár gCroithe Go Deo and ended up  creating art pieces representing the lives of three of the people  commemorated in the project.

“It was an honour to be a part of this brilliant project and heartbreaking as well when you put yourself into the shoes of these families,” she said.

She looks back to when her dad passed away and how his life was celebrated with a big funeral and all his family and friends were able to gather and say goodbye to him. “These guys didn’t get a chance to do that. This  is just something in the town to show those who died during the lockdown that we noticed your passing and you mattered.”

She said the chance to reach out to Carrick families who were unable to celebrate the lives of those they lost  was a privilege and pleasure.

“I feel that this community art project instigated by the hub has filled a little of the gap left by the absence of a traditional Irish funeral.

“It has given us a glimpse of lost lives and personalities and let the bereaved know that in a community as strong as Carrick-on-Suir, they will never be alone.”

The Tudor Artisan Hub is now working on putting the In Ár gCroithe Go Deo public part project on an internet platform so that the public can view and experience the project.

Linda Fahy says putting the public art project online will be particularly helpful for relatives of the people it commemorates who live far away.

The lives of 22 men and women, who died during the Covid-19 lockdown, are remembered and honoured by the In Ár gCroithe Go Deo public art project.