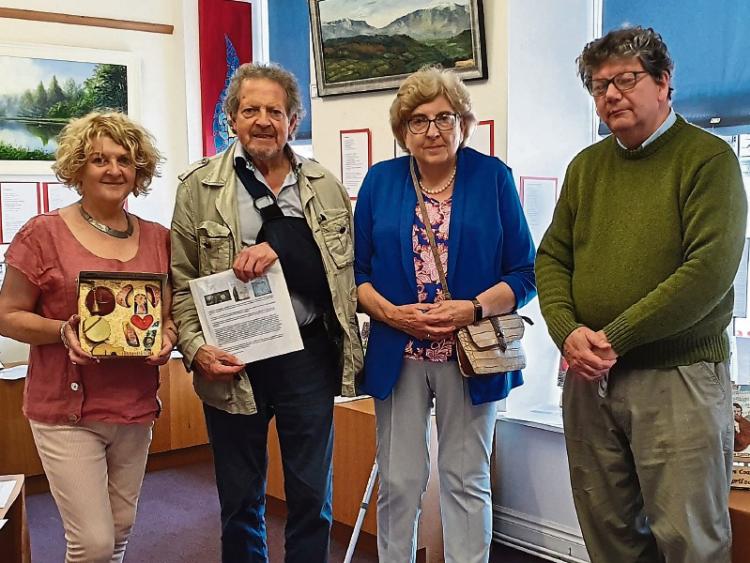 A guitar, bodhran, candles, colourful hair slides and love heart feature  in artist John Davies’ collage style art work celebrating the life of  39-years-old Laura Brazel who passed away on April 1 just days after the country was shutdown to stem the Covid-19 pandemic.

Laura from Brookdale, Carrick-on-Suir is one of the  youngest people whose lives and death are commemorated in the In Ár gCroithe Go Deo public art project.

Her heartbroken parents Gay and Eithne Brazel are delighted the project has given families like theirs an opportunity to publicly remember and honour their loved ones who died during the lockdown period when the normal rituals of funerals were severely curtailed.  They said it provided a great support and comfort to them in grieving their daughter.

Laura was born with a chromosomal abnormality but never let her physical and intellectual disabilities hold her back from living a full and happy life. She lived in a Camphill Community house at Kyle in south Kilkenny for the past decade in between spending time with her family.

She loved dancing, listening to and making music and creating candles at Carrick-on-Suir’s Journeyman Project. And she  had a sartorial fascination with hair slides.

Her health deteriorated significantly in early January and she was admitted to Waterford University Hospital where she died  nearly three months later in the early hours of April 1.

Sitting in their kitchen with a gorgeous portrait painting of Laura looking down on them, Eithne and Gay fondly recall Laura’s mischievious, quirky and sunny personality and her great sense of fun.

The portrait, a gift from Laura’s siblings Karla, Emma and Lee, shows their sister sitting in the sunshine in the back garden of their home.   It was painted from a family photograph.

Gay and Eithne believe John Davies’ painting equally captures the essence of Laura’s life. He knew her better than most as he was her candle making tutor at the Journeyman Project for years.

It’s a heartfelt, poignant and beautiful love letter to her deceased older sibling, which pays tribute to Laura’s  “incredible spirit”, strength of character in overcoming so much in her life and all the simple things in life she adored from dancing to her father’s music and playing the bongos or bodhran with him to taking a spin in the car or enjoying a bottle of coke.

She wrote that Laura inspired her family to be better versions of themselves  and they were lucky to have her on loan to them for 39 years.

Karla recorded the piece she wrote, which along with  music such as the piece Song For Laura composed by her dad was played at the In Ár gCroithe Go Deo Culture Night exhibition at the Tudor Artisan Hub.

The public art project delved into how the lockdown impacted local families grappling with the death of a loved one.

Looking back on Laura’s final months and her death, Eithne recalls one of the most difficult things they had to deal with was when visiting restrictions were imposed at hospitals.   She was thankfully allowed to continue her daily visits to Laura, who is non-verbal.

She was her daughter’s voice, advocate and carer at the hospital but Gay and other immediate family members could no longer visit her.

“Gay used to come in with the guitar and play to Laura. She used to sit up in the bed to listen to him. That was all stopped. It was traumatic for us and very hard for Gay at home. Karla had come home from Brighton and she couldn’t visit also. We felt deprived.”

Gay and Laura’s siblings, however,  did get  to visit,  her   in   final few days before her death.

Luckily for Gay and Eithne,  Karla and her husband, their other daughter Emma, who lives in Canada, along with her husband and two-year-old daughter Ella, and son Lee, who lives in Holland, were able to return to Ireland just before travel restrictions were imposed. They had to quarantine on their arrival in Carrick, which threw up another difficulty solved by the generosity of family friends who gave them the use of an Air B&B and motor home so they could self-isolate.

Laura was waked in the family home before being brought to St Mary’s Cemetery for burial. Due to the Covid-19 restrictions, the family decided against having a church ceremony and instead had a private family service of prayers, readings and songs  at the house.

Eithne said the funeral was very personal and they appreciated that private family time they all had together to grieve for Laura. However, they were very saddened that other close relatives and friends were unable to visit her before she died or   attend her funeral.

Eithne said the family also found upsetting the fact Gay and Lee weren’t allowed to lower the coffin at the burial.  “ It was the last thing Gay was going to do for Laura. It was terribly hard but it was the same for everyone bereaved at that time.”

Despite the restrictions, Gay and Eithne said they still felt the huge support of their relatives, friends and the wider community through hundreds of cards and phone calls expressing condolences which they are still receiving.

For them the In Ár gCroithe Go Deo project has made up for the  public mourning and celebration of Laura’s life that they couldn’t have due to the Covid-19 lockdown.

Gay said when they visited the exhibition in the Tudor Artisan Hub, they found out about other local people who died during the lockdown and whose passing went under the radar for them due to the restrictions.

“The fact they were all represented in this legacy project and that people could come and see it and find out about their lives made up for the fact we couldn’t attend their funerals.

“If you hadn’t been able to attend the funeral, you could at least attend the exhibition as a memorial.”

Eithne said she found the In Ár gCroithe Go Deo project so comforting.  “It was just a wonderful, beautiful idea.”