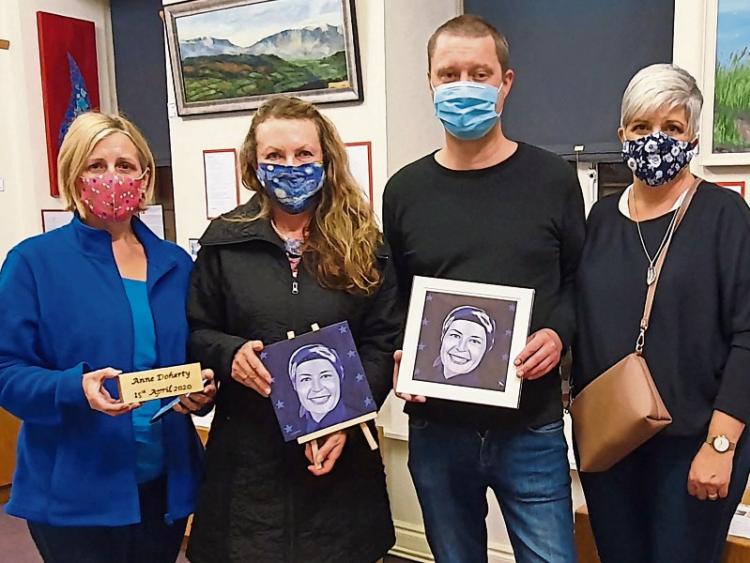 The people In Ár gCroithe Go Deo commemorates all had rich and varied lives as the art project strikingly showcases.

Among them were the actress and singer Anne Doherty, who starred in many Carrick-on-Suir Musical Society and Brewery Lane Theatre productions, and performed with her late husband Harry Doherty’s showband. Artist Teresa Moran painted a portrait of Anne and the written piece commemorating her was a poem by  John C Ryan called Exit Stage Left.

Linda Fahy of the Tudor Artisan Hub said Anne’s daughter Rachel, who lives in Switzerland, was unable to travel home for the  funeral due to Covid-19 restrictions and watched it  online.  The hub is working on putting the  In Ár gCroithe Go Deo  project  on  an Internet platform so people like Rachel can view the   memorial to their loved one.

Anne’s brother-in-law Jack Doherty from Piltown, who had been a member of the Harry Doherty Band, and her  cousin George Coady,  a keen traditional musician, also died during the lockdown.   Their love of music is depicted in the art pieces created in their memory.

Artist Sheila Wood, who played traditional music with George Coady in Delany’s Pub at the Slate Quarries, created two  art work honouring him. One is  a three dimensional piece featuring musical notes and the other shows George playing the tinwhistle.

The late Michael Ingoldsby, Carrick-on-Suir Musical Society’s musical director for many years, is commemorated by a  painting of a dove holding a music note created  by one of the musical society’s current leading stage performers, Sandra Power.

Artist Tony Oakey’s painting celebrating the life of 100-year-old Mary Wells from Hillview, Carrick, features scenes from her hometown  such as the Old Bridge,  her favourite colour turquoise and a lyric from her favourite song Candy Store made famous by Dickie Rock.

Mary   was an avid Dickie Rock fan and the showband  star made a special guest appearance at her 100th birthday celebration in August last year.

The public art project also honours 97-year-old Rena Power, who was a council official at Carrick-on-Suir Town Hall for nearly 40 years. She passed away in early June.

Cavan based artist Juliana Gilbride’s painting features dress shoes, a pearl necklace and bottle of nail polish  symbolising Rena’s love of fashion as well as  books, playing cards and a cigarette representing her other interests.

A number of people with strong local connections, who lived in England, are also remembered.

Local artist Stephen Power was unable to attend his  grandmother Sarah Hawkins’ funeral in London because of the lockdown and created a painting in her memory based on the lyrics of her favourite song  “Little Town In The Old County Down”.    Her family in Ireland celebrated her 90th birthday with her in March but had to cut their trip short due to the pandemic. They never saw her again.

Rena Power’s nephew John Power was likewise unable to attend the funeral of his 88 year-old uncle Fr Andy Kenny in England while John wife Nicola couldn’t attend  her father Maurice Danby’s funeral in England because of the travel restrictions. They are among three  Covid-19 virus victims,  the art project commemorates.

Mia Carney’s  painting  honouring Fr Kenny’s life shows him sliding down a stair banister, aptly capturing his livewire personality while her art work  for Mr Danby shows  him walking his bicycle on a country lane.