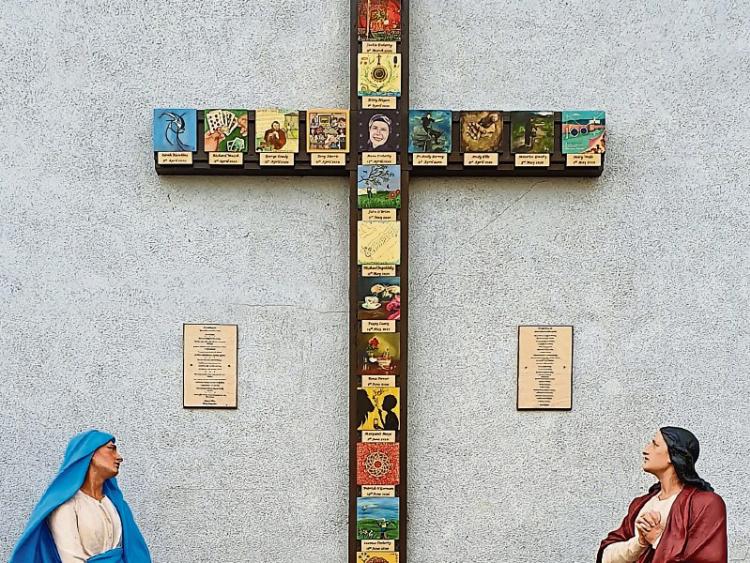 This is the In Ár gCroithe Go Deo public art work commemorating people from Carrick-on-Suir and its hinterland who died during the three-month Covid-19 lockdown last spring and early summer.

Paintings celebrating the lives of 22 people who died during the first lockdown have been posted on this large cross that hangs on the back wall of St Nicholas Church at William Street Car Park.

On either side of the cross are wooden plaques displaying the poems Love in Action composed by Margaret O’Brien and Vision 2020 by Mary McGrath.

The public art work and the commemorative project that led to its creation were featured on RTE’s Nationwide programme last Friday, January 29.

Linda Fahy, founder of the Tudor Artisan Hub collective of artists, and Margaret O'Brien, who runs the Writing Changes Lives creative writing workshops at Brewery Lane Theatre, instigated the In Ár gCroithe Go Deo project to give local families bereaved during the first  lockdown the opportunity to publicly celebrate and commemorate the lives of their deceased loved ones as public funeral ceremonies were prohibited during that time.

Forty-five artists, musicians and writers worked on the project.  The cross, which formerly featured a statue of Christ, was erected with the paintings on October 31.

Linda said the cross that is  the project’s legacy attracts a constant stream of visitors who come to pay their respects to the deceased people it honours. “It’s really very special,” she said.