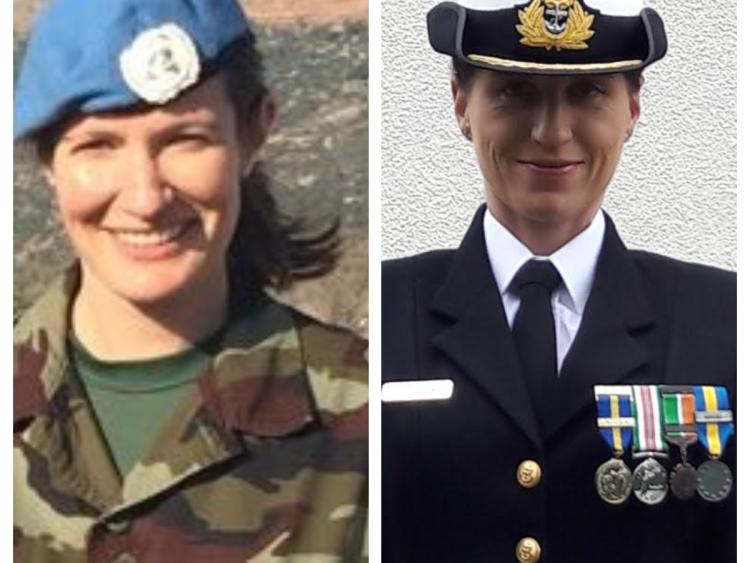 Two Tipperary women are loving their lives less ordinary in the Defence Forces.

The Glen of Aherlow’s Commander Roberta O’Brien and Carrick-on-Suir’s Commandant Rose-Anna White both joined the Defence Forces after completing their Leaving Certificate exams and have since gone on to represent Ireland on the international stage.

MAKING HISTORY
Commanding an Irish naval vessel and becoming the first female to receive the rank of Commander in the Naval Service were proud moments for Roberta O’Brien, who comes from a family with a strong military tradition.

Her late mother grew up on the island of Haulbowline in Cork Harbour where the Naval base is situated, her grandfather was a Warrant Officer and her uncle was a Petty Officer in the Naval Service.

Another uncle is a Commandant in the Army currently serving in Western Sahara and her brother and sister both serve in the Army as officers.

A mother-of-three, she is also married to Lieutenant Colonel Peadar O’Cathain.

“I went to Lisvernane National School in the Glen of Aherlow and played hurling on the boys’ hurling team for Aherlow until I was 14,” says the past student of St Anne’s Secondary School in Tipperary Town.

“I enjoyed a lot of sports but also academic studies, especially maths, growing up so I joined the Naval Service. It was the combination of the outdoor life and academic subjects in terms of navigation that appealed to me.

“My mother and uncles also told me about the Naval Service. The fact that the Naval Service was offering to send me to complete a science degree in NUI Galway reaffirmed my interest,” says Commander O’Brien, who has also studied at University College Cork.

ONE OF THE FIRST
Commander O’Brien was one of the first two women to ever be taken into the Naval Service back in 1995.

She has held a wide variety of appointments at sea such as Gunnery Officer, Fisheries Officer, Navigation Officer and Executive Officer (Second in Command).

It was in 2008 that Commander O’Brien made history and became the first woman in the Naval Service to take command of the Irish naval vessel, the LÉ Aisling. Only six women have subsequently gone on to take command of an Irish ship.

She again made history in 2020 when she became the first female Commander in the Naval Service.

Her shore-based jobs have included Cadet Class Officer, Press and Information Officer, Health and Safety Officer, and Second in Command of Logistics Headquarters.

She has also served overseas on EUNAVFOR MED Operation Sophia, which is the European Union’s response to the migrant crisis.

She spent four months at sea onboard an Italian ship where she was the A/COS (Human Resource Management) for the Force Headquarter staff, which consisted of 45 staff of 15 different nationalities.

She says the Naval Service is “not your average 9-5 job” and recommends it as a career for women.

“You will get to work with great people and in a job that can change by the minute,” she says.

"There are great professional and academic opportunities in the Naval Service. At sea, you could be doing routine maritime defence and security operations one minute, and involved in a search and rescue 10 minutes later. And ashore there are a variety of appointments open to all personnel,” she adds.

‘WEALTH OF OPPORTUNITIES’
Commandant White, who was a member of Carrick-on-Suir Athletics Club growing up, was 17 when she joined the Army.

She says there are a “wealth of opportunities” in the Defence Forces for determined women.

“I always wanted a career that had a lot of variety,” says Commandant White, who completed her cadetship training in The Curragh Camp.

"I was very interested in international peacekeeping and the further education opportunities that the Defence Forces provides,” says the past student of Scoil Mhuire in Carrick-on-Suir.

Commandant White has since completed degrees at NUI Galway, Trinity College Dublin and Waterford Institute of Technology, and has completed numerous overseas operations. She says the Defence Forces is supportive of women who want to continue progressing their careers.

“The highlights so far have been five overseas peace support operations deployments to Kosovo, Chad and south Lebanon, and the time I spent at the Italian Military Academy teaching English to Italian cadets and promoting Ireland at the 2015 global Expo in Milan,” she says.

Other highlights have included appointments at home in the areas of emergency planning, international relations and operations and training.

“I was also very lucky prior to going to south Lebanon on a one year posting to get the opportunity to complete a United Nations Female Military Staff Officers Course in Beijing, China, which was a once in a lifetime opportunity,” adds Commandant White, who is currently working in the area of peace support operations training.