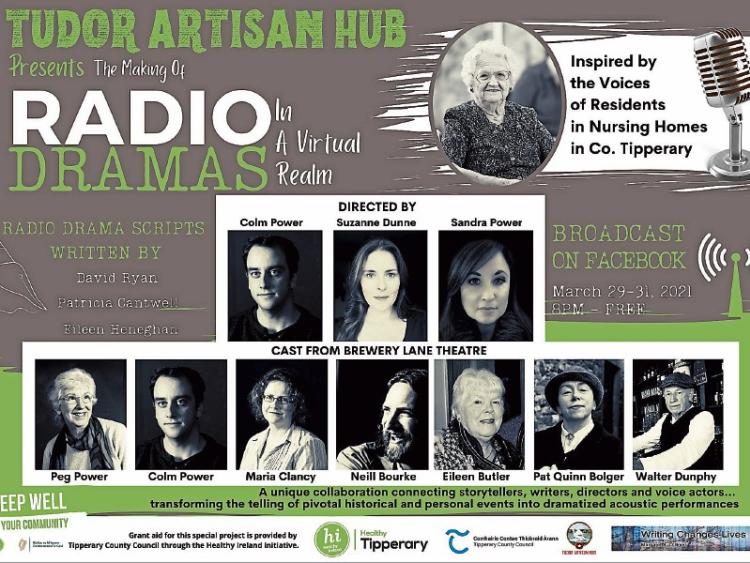 Last year they worked with artists and writers to create the In ár gCroithe go Deo public art project that commemorates 22 people who died during the first Covid-19  lockdown between last April and June.

Linda and  seven artists from the Tudor Artisan Hub arts collective submitted a proposal to produce radio dramas online. The idea was to get stories from residents in nursing homes about another time in their lives when the world was turned on its head and everything worked out okay.

The proposal was accepted by the council and the past two months have been spent researching, writing and preparing the dramas.

Greenhill Nursing Home in Carrick-on-Suir, Melview and St Anthony’s nursing homes in Clonmel answered the call to take part in the project and seven of their residents recorded their stories.

They welcomed any stories the residents could relate about living through a hard time in their life due to a global or national crisis, pandemic, epidemic but that they had survived.

In the interviews however, many residents began to talk about their own personal life challenges and triumphs, which they had overcome and survived. These testimonies were relatable, intimate and demonstrated the resilience of our older citizens.

All the interviews were recorded virtually, using a combination of mobile phones, the platform Zoom and professional recording devices. They  became the source material for writing the drama scripts.

Thirteen writers from Margaret O’Brien’s writers group volunteered to write the radio drama scripts  and three out of the 12 scripts produced were selected by a judging panel to be recorded as dramas.     Due to the Covid-19 restrictions, the actors performing the pieces had to record their individual parts separately.

The challenge to the writers was to write monologues or inter cut monologues, not dialogues, to overcome the technical constraints due to Covid protocols.  “In order to keep the anonymity of the residents we are not revealing any details about  who inspired the scripts or announcing publicly which script comes from which nursing home. But we can say that two of the residents were in their late 90s,” said Linda.

“We would like to congratulate the three writers whose scripts were selected to go forward: David Ryan with What Kind of Blue?, Patricia Cantwell with Kintsugi and Eileen Heneghan with The Magical Moon.”

The three scripts were paired with well-known local drama directors and  experienced voice actors were cast in the parts.

All are associated with Brewery Lane Drama Group in Carrick on Suir. The cast included actors in their 70s, 80s and  early 90s.

“The What Kind of Blue? script was directed and cast by Colm Power.  This play had a cast of two, renowned actress Peg Power, Colm’s mother and Colm himself.  Kintsugi was allocated to Suzanne Dunne, to direct and cast. This play also had a cast of two actors Maria Clancy and Neill Bourke.”

The Magical Moon script was directed and cast by  Sandra Power and its three cast members were Walter Dunphy, Pat Quinn Bolger and  Eileen Butler.

Linda said the professional recording of the three plays was completed on Sunday last, March 21 and are now in the editing room with sound engineer, Pete Smith.