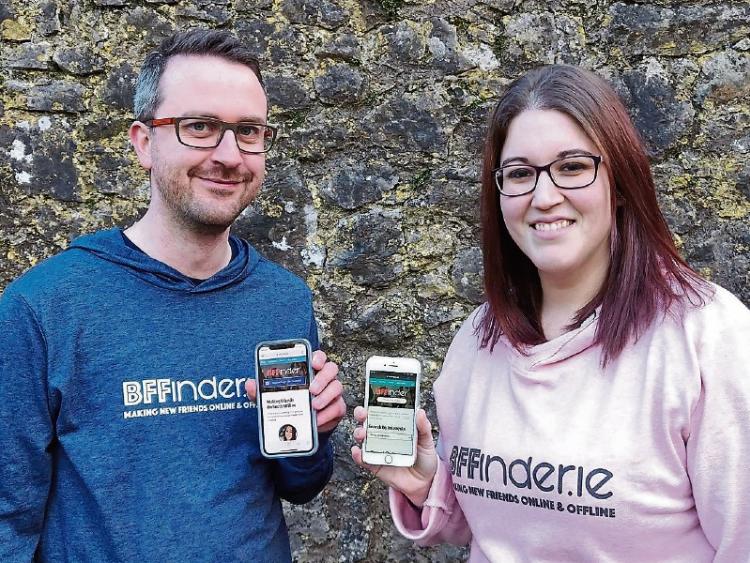 Liam Burke and Louanne Howley have set up BFFinder, a website helping people to find friendships

A Clonmel-based web developer who says he has been fortunate to have coded websites for musical acts Take That, Gary Barlow and Kimberly Walsh has teamed up with Louanne Howley to create a website to assist people who wish to make new friends.

Liam Burke says the idea came about while he was discussing how Louanne had found it hard to initially find friends when she arrived in Clonmel from Canada back in 2012.

“I was also in a similar situation, as many friends had travelled abroad for work and I knew lots of people who no longer had their college or past work friends around to catch up with, or to head out to see a live music performance or just grab a coffee with someone.”

Liam says that as hard as it is to find a partner online, there are numerous websites and apps catering for this market.

“But we discovered that it was hard to find a website where you could just register and look for people to chat with to build a friendship.

“We sat down and worked on a name and planned out the website functionality and came up with the name BFFinder (Best Friend Finder and also BFF being an acronym for Best Friends Forever).

“We officially launched a beta version in late 2019 via a social media campaign and gathered over 650 members in just over a month.

“The website has received ample positive reviews and people have already made connections via the website and in person.

“We’ve had lots of feedback relating to people who have just moved here or people whose friends have moved abroad for work or people who want to attend a concert, but their friends just have no interest.

To give it a whirl all you need to do is visit https://bffinder.ie.

There’s a one-click login with Facebook or you can manually register via email and your profile consists of your name and profile photo, and then you can assign tags to your profile to share what you’re interested in, such as coffee chats, walking, or the cinema; and then you can browse all members that have similar interests.

You can also see what else they are interested in and then message that person to begin a conversation.

“We were thrilled to launch this new project for the whole of Ireland and for people abroad intending to come and study or work in Ireland in the near future, or for someone who has recently moved to a new town,” says Louanne.

“I’ve always been a very shy person until I know the person better, so for me to go out and just make friends was really hard. So I thought why not break that barrier down online first!”

BFFinder has already launched a number of new features.

These include  browsing members via their interests and their county, private messaging, contributing to group discussions via the forum, the ability to add a maximum of three photos to your profile and gatherings - a place to post gigs, social events or just to grab a coffee with someone and see who else would be interested in attending.

Post-Covid, Liam and Louanne  hope to connect with local coffee shops, restaurants and other venues to see about them offering discounts to help with people who have connected online to have a few nice options for meeting up offline for the first time in a safe environment.

The website is built using the most modern web design standards so it displays nicely across all devices.

This means you can browse members while  using your tablet or while waiting in a queue using your smartphone to chat with others.

Since graduating from LIT Clonmel in 2006, Liam has set up his own business and worked closely with an agency in London called Studio Fury.

As well as coding websites for Take That, Gary Barlow and Kimberly Walsh, he has also assisted local clients such as Hemera, Prego Pizza and Rívesci.

He has also managed international company websites such as Utmost.

Liam was influenced in his choice of career by his parents, Michael and the late Dolores Burke, who both worked for Curran Ltd as screen printers.

His father also ran a local youth club based at Mulcahy House where he gave up his time voluntarily for over 40 years, which inspired Liam to donate some of his time to help others too.