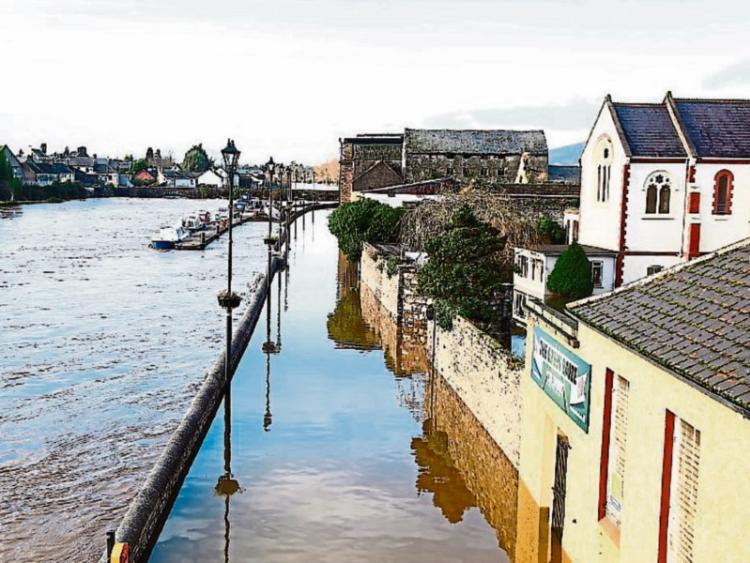 A Carrick-on-Suir councillor has criticised senior council officials for ignoring his appeal for a “round table” meeting of Government agencies in relation to flood prevention measures for his hometown.

He called for the meeting of all these agencies at the February meeting of the district’s municipal councillors in the wake of flooding scares in the town that month.

That meeting heard how heavy rains in February resulted in minor floods on the N24 close to Davin Park and Suirside Veterinary Clinic over a two week period while one councillor also witnessed a surge of water at  Markievicz Terrace nearby.

They were caused by a surcharge of water when the main drainage system became overloaded due to the quantity of rain that fell.

Alongside this, run-off water from land along the Ballyrichard Road following the heavy rains overloaded the foul water system in that area.

A flooding incident was prevented when a pump was put in place by the council that cleared the manholes and gullies. Residents in Collins Park located off the Ballyrichard Road were unable to flush their toilets during the crisis.

Cllr Bourke criticised council management for “giving the impression” they would arrange the round table meeting of agencies in February but they were now telling them it couldn’t happen.

“I intend to raise it weekly and monthly until we have a meeting,” he declared.

Cllr Bourke added that he believed putting in place flood prevention measures to adequately protect Carrick-on-Suir was the “single biggest issue” for the town at the moment. However, he feared it was being “kicked down the road”.

“As a public representative I won’t allow it to be kicked down the road,” he vowed. “There are too many homes at stake. The whole town is at stake here.”

“I don’t think there is any benefit to having three separate Government departments sitting around the table to sort it out,” he argued.

Mr Corby detailed the efforts he has made since February to address Carrick-on-Suir’s flood threats. He recalled how the water pump on the N24 near Davin Park had to be turned on manually by a contractor who had to travel to the town. He said he had asked the company and Irish Water if the extra water pumping capacity could be turned on electronically rather than manually.

The council was also working with the OPW in relation to whether the town’s six flood water pumps on the quays are working well and whether extra pumping capacity was required.  There were plans to create extra gullies on the North Quay to suck flood waters away.

Carrick-on-Suir Municipal District’s Director of Services, Brian Beck, spoke in support of the District Engineer’s approach and agreed with him that it was not necessary to bring all the agencies together at one meeting.

“Following on from the last meeting, he has engaged actively with the different organisations.

“To bring them all around the table is not possible at this time. They are all responsible for different issues and he has been engaging with all of them.”  Carrick-on-Suir MD chairman Cllr Kevin O’Meara proposed council management produce a list of flood prevention tasks that need to be tackled in Carrick-on-Suir by the various agencies and update councillors on their progress.

Carrick-on-Suir Sinn Féin Cllr David Dunne said they were lucky there wasn’t a more significant flooding incident in the town in February. The surcharges of water were spotted before they caused a bigger flooding problem. He asked why someone had to come from Clonmel to manually turn on the extra water pumping capacity near Davin Park. And he wondered what would have happened if the surcharges occurred over a weekend or during the night.

He complained that he and Cllr Bourke still hadn’t received adequate answers in relation to the causes of the big flood in Carrick-on-Suir in late December 2015. If new water pumps were needed for the town, then they should be obtained so the town could be properly prepared for the next big flood.

Cllr Bourke agreed. He recounted how he and Cllr Dunne rejected the findings of the OPW report conducted into the causes of the 2015 flooding of Carrick-on-Suir.

He recalled that following the production of the OPW’s final report on the 2015 Carrick flooding crisis in late 2018 a special council meeting was organised early the following year to discuss the actions that needed to be taken to prevent future flooding in the town.

However, no Irish Water or OPW representatives attended that meeting where small steps were identified to prevent future flooding incidents.

Cllr Bourke said a follow-up meeting was to be organised but it never happened.

This was why he was calling for it now to take place. He wanted all the agencies with flood prevention responsibilities to meet together on this issue as it was easy for each individual agency to put the blame for flooding issues on another agency.

“It’s like the old saying, it’s always someone else’s fault. Everybody is blaming, everybody else,”  he said.

Cllr Bourke also told the meeting he honestly believed Carrick-on-Suir’s sewerage treatment plant was inadequate for the town in severe flood situations because of the combined storm and waste water network.   Mr Beck said it was a really good idea for councillors to be updated and stressed the council was “actively engaging” on this issue.  Mr Corby gave a commitment to update councillors on the progress of flood prevention measures before their next meeting.