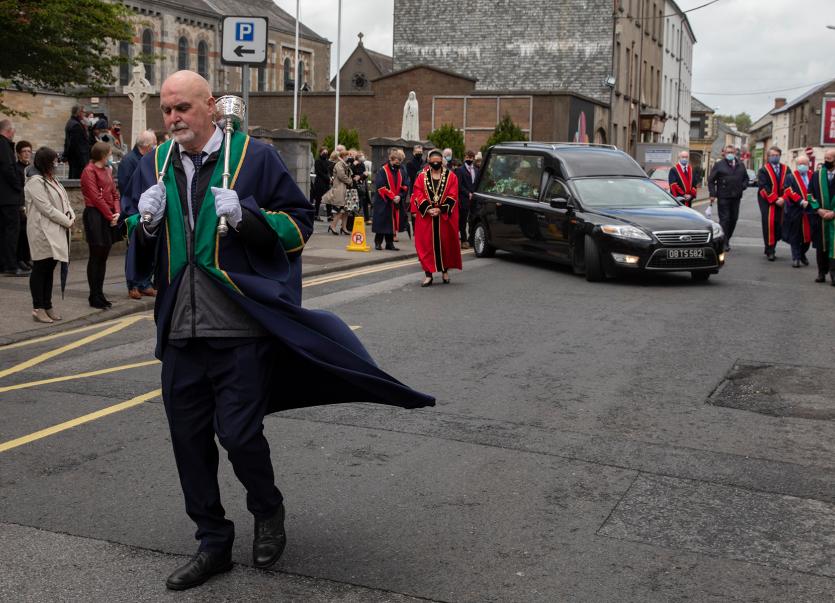 The people of Clonmel bade farewell on Sunday to one of the county’s most influential and popular political figures, Tom Ambrose, who had the distinction of serving three terms as Mayor of Clonmel and also chaired the former South Tipperary County Council three times.

Mr Ambrose’s daughter, Siobhán, who is Mayor of Clonmel, had the heartbreaking but proud duty of leading the guard of honour of her fellow elected Borough District councillors in accompanying her beloved father on his final journey from Ss Peter & Paul’s Church in Clonmel to his final resting place at St Patrick’s Cemetery.

Clonmel’s historic town maces were carried at the head of the funeral cortège, which stopped at Town Hall and at the local Fianna Fáil headquarters at Denis Lacey Hall on the way to the cemetery.

Clonmel Borough District staff stood outside the Town Hall and members of the Fianna Fáil party stood outside Denis Lacey Hall to pay their respects to the Limerick man who was an “iconic figure” in the party locally. Mr Ambrose, who was aged 87, passed away peacefully in South Tipperary General Hospital last Wednesday. The native of Newcastlewest was a councillor for 35 years and served on both Clonmel Corporation, later renamed Clonmel Borough Council, and South Tipperary County Council.

Outside politics, Tom was a highly respected teacher of English, maths, Latin, history and religion at Clonmel’s CBS High School between 1962 and 1999. He was married to his beloved wife Joan for 59 years and they lived at Melview, Clonmel where they brought up their six children. His funeral Mass at Ss Peter & Paul’s Church was a private family ceremony in keeping with Covid-19 pandemic restrictions. But many attended the ceremony virtually as it was broadcast online on the parish website. A guard of honour of Fianna Fáil politicians and retired High School colleagues accompanied the coffin into the church. The Mass began with his grandchildren bringing symbols of his life to the altar. They included Latin and Shakespeare books, his original High School contract, a tuft of grass and his mother’s rosary crucifix from his family’s farm in Newcastlewest, his own rosary beads and holy water.
Also brought to the altar was a photo of one of his grandchildren, Zoe-Joan, who was unable to attend the funeral Mass but who watched the ceremony online; his pocket radio symbolising his interest in current affairs, a plaque he received on his High School retirement representing his service to the State and teaching and a packet of jelly sweets symbolising the fun side of his character and the parties he threw his grandchildren.
The funeral Mass was celebrated by his brother Canon James Ambrose, who in his sermon, recalled Tom’s interests in history, English and philosophy, his literary hero Shakespeare and his love of teaching.
Canon Ambrose said his brother had a “lovely sense and spirit of patriotism”. He spoke of the many people he helped as a local politician; how he promoted the development of Clonmel and district and his instrumental role in the retention and upgrade of STGH. He remembered during visits to Tom’s home how the phone constantly rang but no call was left unanswered.
Tom’s son Patrick recounted in the eulogy at the end of the funeral Mass, how his dad loved company and was a very social person who treated everyone the same. He recalled the parties his father organised for his grandchildren, who brought him pure joy. And he spoke of how his dad was a born teacher and how former students of the High School would often call to their home many years later to thank him. His father was delighted when Siobhán followed in his political footsteps and it was a great source of pride to him when they made history and she too became Mayor of Clonmel and chairperson of the county council – the first time a father and daughter had done so. “It’s a testament to his time in politics that he was widely respected and made friends across the political divide. He shared a genuine affinity with those who, like him, were motivated by promoting the best interests of the community. He believed in public service, above politics.” Tom is survived by wife Joan, children Tom, Maria, Kevin, Norah, Siobhán, Patrick; brothers Canon James, Patrick and Michael, sisters Kathy, Ann, Teresa,Mary,brothers- -in-law, sisters-in-law, daughters-in-law Caitriona and Bim, sons-in-law Kevin and Nelson, grandchildren Conor, Sarah, Lorcan, Thomas, Zoe-Joan, Stephen and Michael, nieces, nephews, former colleagues and many friends.  He is predeceased by his brother Sean, parents Nora and Thomas, brother-in-law William O’Gorman, and sister-in-law Pearl (née McAdam)