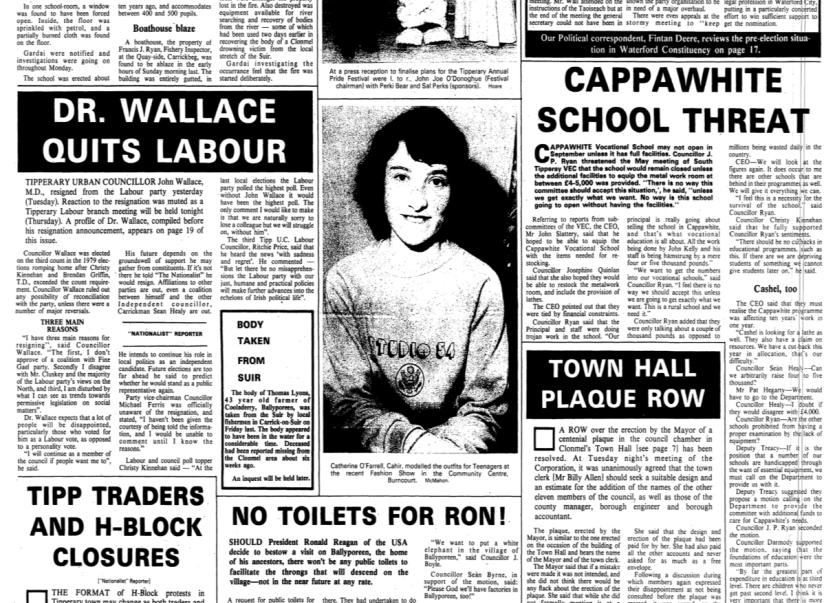 We go back 40 years this week to May 1981 for our YESTERYEARS feature.
The front page lead related to an attempt to burn Scoil Mhuire, the Convent of Mercy Secondary School at Greenhill, Carrick-on-Suir. Over the previous weekend intruders had entered the school and sprinkled petrol around a classroom. A partially burned cloth was found on the floor.
It was not as fortunate though for a boathouse on the Quay in Carrick, the property of Francis J. Ryan, which was gutted in a blaze on the Saturday night.
In Tipperary Town, UDC member Dr John Wallace resigned from the Labour Party giving three reasons for his decision one of which was the decision of Labour to go into coalition with Fine Gael at the time.
On a very newsy front page that edition there were also stories on...
a threat to Cappawhite Vocational School of not reopening the following September due to funding;
a row over the erection of a centennial plaque in the Town Hall in Clonmel which did not include the names of the current Corporation members and officials;
the format of H-Block demonstrations in Tipperary Town in relation to traders opening or closing during the protests;
and should the then President of the US, Ronald Reagan, ever decide to come to Ballyporeen, it was stated that there was no public toilets available at the time.