COLUMN: 'We were professional on the pitch, but it had the amateur ethos off it...'

Travel Tales with Fergal in this week's Nationalist 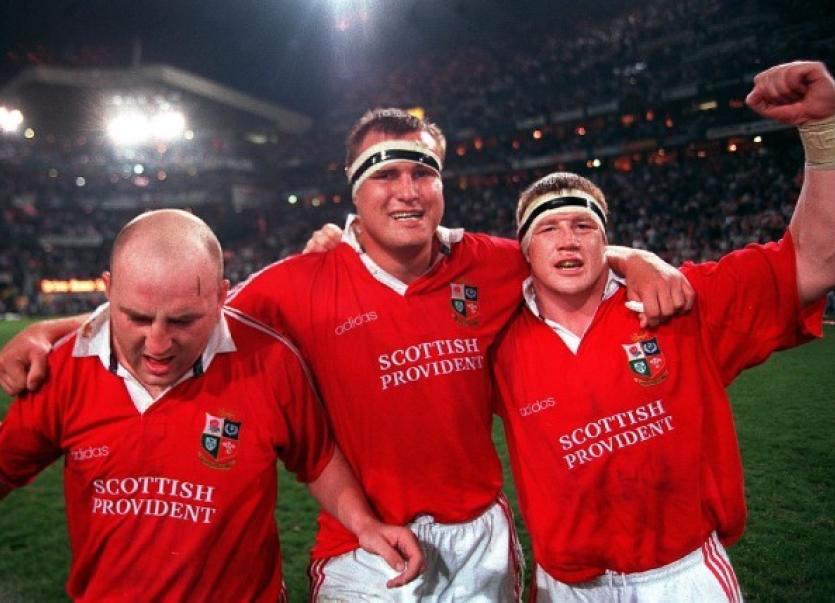 Looking ahead to the Lions tour to South Africa this year, former Ireland international and rugby legend Paul Wallace feels “South Africa is the toughest place to play test rugby when it comes to the physicality.

New Zealand might put more on the scoreboard but for the sheer physicality of it, I think South Africa is the toughest place to go”.

Irish prop Andrew Porter had his tour cruelly taken away when he injured a toe in his last Leinster game recently.

English man Kyle Sinckler is the player to get the replacement call up and Paul Wallace was in the same lucky position in 1997 on the eve of the tour when fellow Irishman Peter Clohessy pulled up injured at the London training camp.

Paul described that career defining moment in the podcast.

He said: “I was hopeful of going on the tour, but Peter Clohessy had been picked for Ireland in the Six Nations ahead of me. But then Peter got injured at Lions training and we actually passed each other at Heathrow and saw each other through the glass partition, as he was going home, and I was arriving.

“I was very, very disappointed not to get picked on the squad initially. But in hindsight I missed just two days of training in London before Peter, unfortunately for him, got injured.”

Keith Wood talked about that real-life sliding doors moment from Peter Clohessy’s perspective in the new, This is your Everest, book. Keith said that Peter was distraught when he got injured and that he had never seen him so upset.

This was exacerbated by management trying to take all Peter’s gear before he left for Ireland. Management asked Keith to help get the gear back but when Keith saw Peter in convulsions of tears, he told Peter to ignore them and just keep the gear.
Paul says it was a daunting task going down to play the World Cup champions.

“We were massive underdogs going down there. We were quite professional on the pitch, but it had the amateur ethos off the pitch. We were lucky that everyone had a day job outside of rugby, so people really enjoyed going on that tour.

“I was probably seen as a young kid by the other players.

“The fact of not being selected initially gave me a bit of a bit of hunger.

“But I was eager to prove myself and that gave me an edge over Jason Leonard and Dai Young, who were capped internationals, and they were favourites to start.

“It was that competition for places that really drove the squad.

“It was at another level up, when comparable to say, a tour to South African with Ireland and the 95 World Cup.

“From a professionalism point of view, it was several levels up. It is like a World Cup final for the host country as it only comes around every 12 years.”

Paul was pivotal to the winning of that series and was one of only five players to play every minute of the three tests.

Paul was described as the player of the series by captain, Martin Johnson, and Paul jokes in the podcast: “That was a backhanded compliment by Johno for himself, as he was pushing behind me in the scrum.”

When talking about the Lions ethos instilled by Ian McGeehan and Fran Cotton where players trained hard but enjoyed themselves too, Paul said: “I think Ireland have lost out on that social aspect in World Cups.

“If you are not enjoying yourselves then you can go off form. The guys that were enjoying themselves feed off that and played well.

“The guys that retired to their room and only trained found they lost form. It gave the squad a bond and mental toughness that was crucial to winning the series.”

Every rugby fan has seen the famous documentary from that 1997 tour called, Living with Lions, and the coach Jim Telfer’s famous speeches shone through.

“People rave about Jim Tefler’s speeches and rightly so, he really had the hair standing on the back of your neck and he’d always get that extra couple of per cent out of you during a training session.

“You’d get a bit of a tongue lashing from Jim and you’d find that extra 2%.”

Keith Wood feels that the Lions over-trained in 2001 to Australia and he still has regrets from that Lions tour.

Keith Wood considers Ian McGeechan as the quintessential Lions coach because he understood the Lions ethos as he was also a Lions player.

He feels Warren Gatland learned from McGeechan in South Africa in 2009 and from the mistakes of the Lions tour to Australia.

“Graham Henry in 2001 was a really good coach. But we were wrecked going on that tour.

“And we overtrained on that tour because we were trying to get to a level of technical proficiency in a very short period of time.

“In my view, we got that wrong. We had a very long season that particular year, playing nearly twice the amount that the guys are playing presently.

“So we were shattered going out. If we had taken a rest for three weeks, I think we’d have had a better chance. But we fell apart over time. And even with all that, I am still unbelievably annoyed that we left that behind us, we were so close.

“I think Warren Gatland has learned from that. That seems to be his style to have a simple game plan and not overwork the players.”

After the longest season, it is a big ask for the Lions but very exciting because of that.

Fergal O’Keeffe is the host of Ireland’s No.1 Travel Podcast, Travel Tales with Fergal, which is a weekly interview series where a special guest shares stories from their travels, adventures and experiences living abroad.

Both Keith Wood’s and Paul Wallace’s episodes are available on www.traveltaleswithfergal.ie.

Clonmel’s Fergal has a lifelong love of travel. He loves going on adventures and planning future trips. He brings his natural curiosity and passion for adventure when interviewing a wide range of guests from the arts, sports, journalism, business, travel professionals and adventurers.