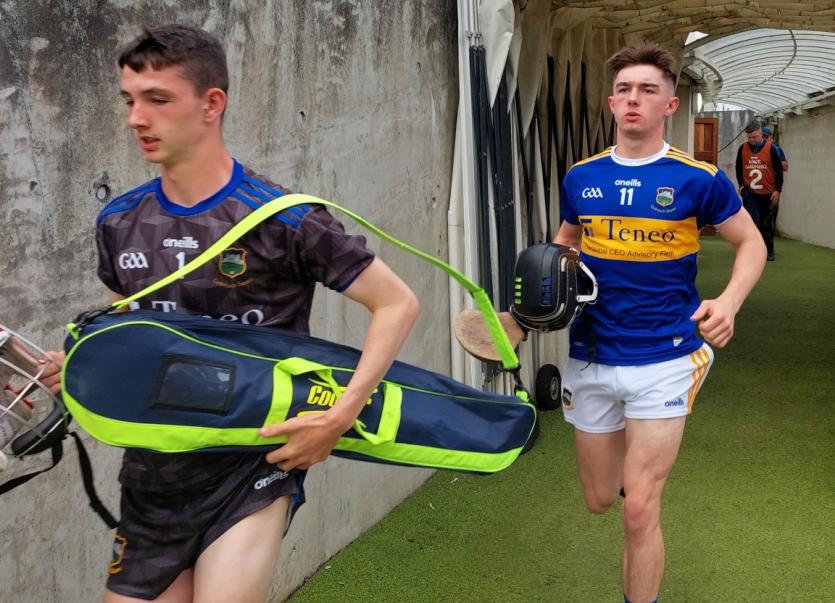 Tipperary goalkeeper Eoin Horgan and centre-forward Conor Martin run at to the field before the commencement of tonight's game at LIT Gaelic Grounds, Limerick.

On Wednesday evening, Tipperary minor hurlers produced a vastly improved second half performance at the LIT Gaelic Grounds in Limerick to book their passage a provincial semi-final with Waterford in two weeks time.

Leading by just three points at the break 1-10 to 1-7, James Woodlock’s charges found their rhythm much better after the break to run out comfortable winners in the end by 16 points, 2-27 to 1-14.

There will no doubt be huge room for improvement required for the next day, especially from an opening 30 minutes when Tipp looked anything like a settled or composed outfit.

However, a blistering opening four minutes in the second half in which Tipp scored 1-3 without reply, including a second goal from full-forward Darragh Guinan settled the nerves of the youngsters and thereafter it was all very much one-way traffic.

That early second half goal came following a run in along the end line by the lively Conor Martin and eventhough he was fouled Tipp still made use of the advantage rule and Darragh Guinan made sure to take the opportunity and goal.

Darragh Minogue also put in a fine second period scoring six from play (seven in total) while Conor Martin with five from play and Orrin Jones with eight points  (4 from play and four placed balls) were Tipp’s chief scorers on a night where a greasy pitch didn't make it conducive for the players to show of their best.

There were some other fine performances throughout the field for the winners, Ronan Connolly, Philip Hayes and Ben Currivan having their moments but overall there will be a world of work to be done to get ready for the Deise, while Cork who hammered Clare on Wednesday evening whiles scoring 6-28 to 0-6 will meet Limerick in the other semi-final.

The opening half had been anything but impressive from Tipperary and they were lucky to get to the break leading by 1-10 to 1-7, at times the Kerry side looking much the better. A pair of swapped frees inside the opening two minutes were followed by five unanswered points from Tipp, four from play including a brace from the lively Conor Martin at centre-forward.

Kerry got back on the scoreboard with their second free in the 13th minute, but following further Tipp points from Orrin Jones and Cappawhite’s Conor Martin Tipp looked comfortable going to the first half water break leading 0-8 to 0-2.

Darragh Minogue stretched that advantage to seven with a point before Kerry staged a storming revival. The very impressive Felim O’Sullivan’s had a pair of frees before Orrin Jones pulled one back for Tipp in the 20th minute which would be their last white flag of the opening period.

Like the proverbial bus, having waited 23 minutes for a point from play for Kerry, one came along via O’Sullivan, and another arrived two minutes later, this one an excellent effort from Sean Twomey-McElligott.

But then Tipp were rocked back in the 27th minute when a long delivery from Kerry half-back Dara Kearney was poorly handled by the Tipp defence and Killian Boyle took full advantage to give Eoin Horgan in the goal no chance.

Incredibly Kerry then had a chance to level with Keltyn Molloy’s free from his own half way line which pulled wide, before Tipp dug themselves out of a hole in a somewhat fortuitous way. An attempt at a point by Darragh Minogue seemed to fall short and fell kindly to full-forward Darragh Guinan. The Lorrha/Dorrha man didn’t need to be asked twice and buried the sliotar to put Tipperary four up.

The final score of the opening half went to another Felim O’Sullivan and Tipp were happy to get to the break leading by 1-10 to 0-7. James Woodlock’s words at half-time were needed and obviously helped set Tipp up for a much better second half showing.