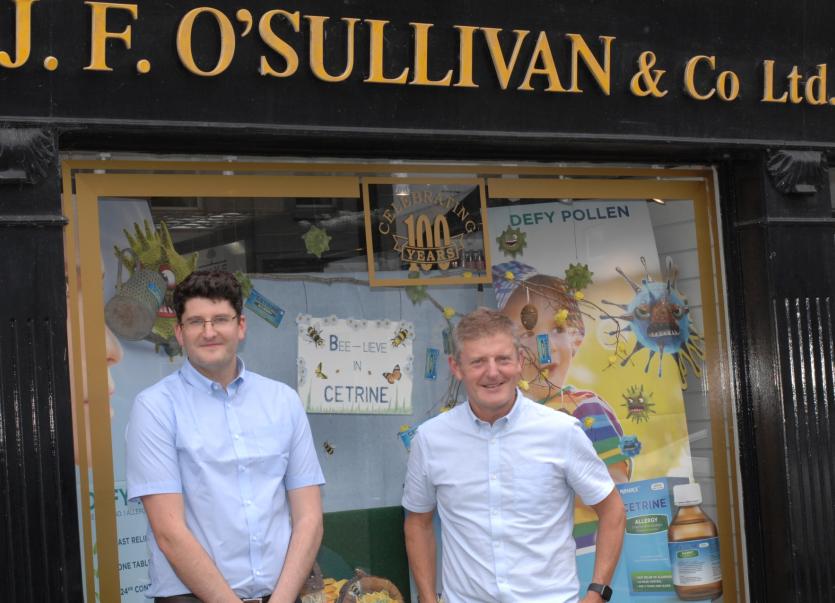 Last week Jeddy Walsh from The Nationalist met up with Fethard pharmacist Jimmy O’Sullivan who considers it a public duty for him to be involved in the vaccination campaign.

The Covid-19 vaccination programme gained added impetus last week when the country’s pharmacists joined in the rollout of the nationwide campaign, a move that has been greatly welcomed by the profession including Fethard pharmacist Jimmy O’Sullivan.Jimmy, whose family are in their 104th year in business in Fethard, admitted that pharmacists in general were “despondent and somewhat aggrieved” to have been excluded along the way but that personally he was happy to say that “we are fully engaged now and we’re delighted to be involved in the vaccination” programme.
According to Jimmy, the third generation of his family to run the business on Main Street, “the campaign is going great so far, the phones are ringing constantly and we are also installing a booking service on our webpage to keep up. Everything happened so quickly in the end, we just had to get it sorted,” he said.
Things have been so busy that O’Sullivan’s quickly went through their first batch of vaccinations and Jimmy was soon on the trail with the HSE to request more. “We had 50 vaccines for the over 50s and that went and was quickly all used up,” he added.
“We’ve now just got the first dose of the Johnson & Johnson Jansen single dose shot. We are now allowed to use that with those from 18 years plus so that was a big move in pharmacy vaccination. Up to that we were only allowed to use the Jansen single dose for those over 50 years of age. But so many of that age group had been previously vaccinated that there weren’t a whole lot of those out there. I then actively went out to try and find these people that were over 50 who hadn’t been vaccinated and I did, I got 50 people so I literally used up all my vaccinations. So, when it then came to the 18+ I had no vaccinations and I was left to try and explain to the people in the HSE that I had no vaccines remaining and that I needed more.”
“We are now expecting 100 again but I have a waiting list of 500 as it stands,” he added.
Jimmy, along with his son Jack who is also a qualified pharmacist, have a strict procedure in place regarding the fair administration of the vaccine.
“It’s on a first-come first-served basis that we proceed with the vaccination programme. I suppose of that 400-500 people I mentioned that we have on a waiting list I suspect that this will probably be down to a true 200 because some people are phoning multiple pharmacies and are booked in all over the place and will take the first opportunity. That’s going on everywhere,” added Jimmy.
“At the moment people are phoning up and we are taking their age, everyone who is 18+. So once they are over the age and they just want a single shot we’re happy to give it to them once we have the vaccine available. The Johnson & Johnson vaccine suits a lot of people, particularly the younger cohort who just want one dose and be done. It then allows them to go travelling fairly quickly and they are ready to do that after just two weeks as they’re fully vaccinated at that stage. With other vaccines you would need a booster after four weeks and that doesn’t suit everyone,” added Jimmy.
The demand for vaccination and the success of the take-up with pharmacists has surprised O’Sullivan’s in ways.
“I heard of the whole campaign beginning on the radio on ‘Morning Ireland’ on a Friday at twenty-past-eight and 10 minutes later my phone started ringing to book appointments and it really hasn’t stopped since. And it’s great that it’s like that and it’s great that people want the jab. We were, I suppose, afraid that the age cohort 18+ might not even want to get it but it seems like everyone wants it, and pharmacists are really glad about that,” he continued.
I put it to him, should pharmacists have been involved earlier?
“Yes, we definitely should have been, but we weren’t and we were quite despondent,” he pointed out.
Colourfully, Jimmy said that he described it to somebody “as being like a football game”.
“We are all in it together once, the doctors, the GPs, the hospitals, the pharmacists, all doing the flu vaccinations together and, which I must add, was working really well. We did particularly well this winter; pharmacists did a phenomenal job, 300,000 vaccinations alone for the flu. But when it came to this vaccination programme, it was like they said to us, ‘okay lads you’ve played a good game but we’re putting you on the bench now for this match’,” said Jimmy.
“So that was the first lot of it that we weren’t in on. Then it was the next cohort, the over 70s and only the GPs were doing that, and then the next one was for the over 60s and the pharmacists were again let sitting out this on. When it came to the over 50s we were brought into the game but there were very few of that cohort remaining. We were brought in for sweeping up that end of it. But we are fully engaged now and we’re delighted to be involved in the vaccinations,” he said.
“I think it is a public duty on my behalf and I wanted to do it. I felt if I can do it I should be doing it. I really felt a bit aggrieved about it and I felt I was being left out. Look here I was a qualified person, willing and able to vaccinate and they weren’t using my skills. All pharmacists were very despondent about the fact that they weren’t being used in this campaign,” he said. 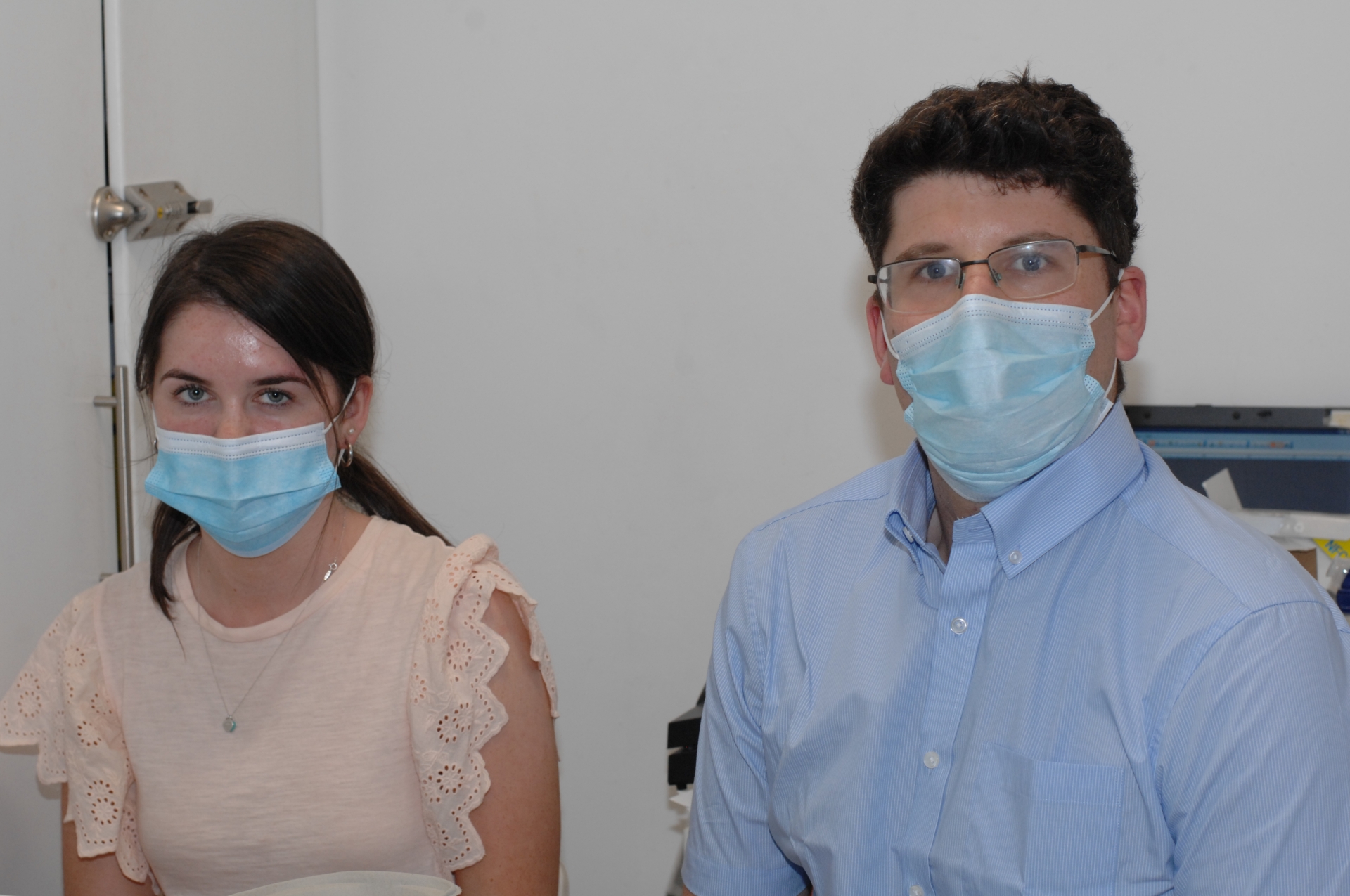 Busy days at O'Sullivans Pharmacy in Fethard - the vaccination is ongoing and will be for the foreseeable future.

Jimmy wasn’t fully convinced initially that the young people would buy into the vaccination rollout like older age groups, but he is thrilled that they have done so and enthusiastically at that.
“I am more than pleasantly surprised, I am delighted with the interest and attention that the young people around here are showing in it and that’s kind of replicated around the country. There is definitely a huge demand in this age group for the vaccine because I think that while we have all been cocooned for too long, I do think, particularly the younger age groups, the 18 to 30-year-olds, have been more affected than anyone else. From a social point of view and in many other different aspects of their lives they have missed out on a lot during this pandemic. Things like college which didn’t happen for them and doing it online at home with their parents, and other such things. You know, there’s a certain amount of growing up that they’ve missed out on. So I’m delighted to be able to offer all of them the vaccine and hopefully they can get back to some kind of a normal life soon,” added the pharmacist wearing a parent’s cap.

And while there is a lot of positive momentum building as the country racks up the numbers with regards to vaccinations completed, Jimmy also sounded a word of warning.
“This Delta variant is very concerning. We still have to do what we’ve been doing all along to some extent. If you’re vaccinated it allows you to be a bit ‘more free’ perhaps in your life but at the same time we all need to be cautious because even if you’re vaccinated you can still be a carrier of this Delta virus. So you can actually pick up the virus and while you may not get sick, you can pass it on to other people.
“Remember there are so many people out there who are not vaccinated by choice, and others who are not completely vaccinated because they are still awaiting their second dose. All those people are still vulnerable and worryingly you can see hospital numbers have been increasing again over the last number of days. This is the start of the fourth wave now but hopefully we won’t be hit as strongly as we were with the other ones,” cautioned Jimmy.
“I think come the autumn there is going to be a booster dose for everyone again, so we’ll be involved in that here. People will need boosters especially with these variants coming. It’s going to be like the flu because this is going to keep changing and it isn’t going to go away anytime soon. It’s how we respect and respond to it that will be the answer,” concluded Jimmy.

Tipperary publicans 'sick to death of it all' as Government can't see beyond the 'Red Cow'!