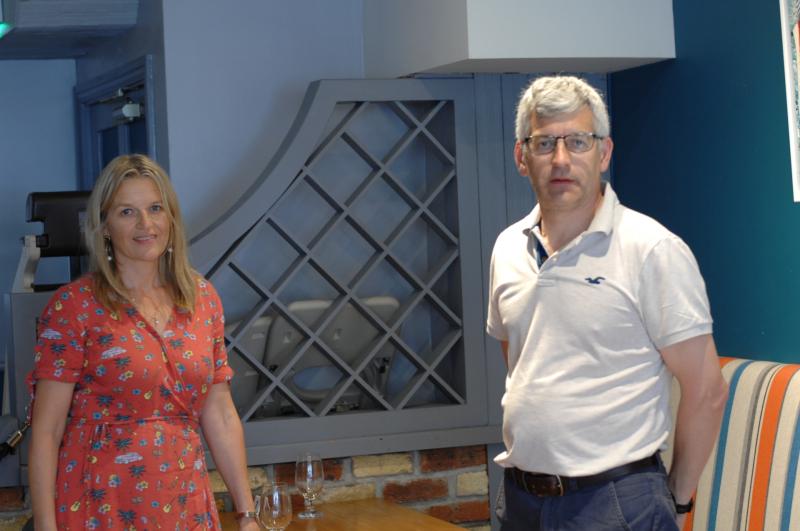 With restaurants and pubs throughout the country scheduled to reopen again on Monday next, July 26, under new legislation - somewhat rushed through Government - one long-established Clonmel restaurant and pub, Mulcahys of Gladstone Street has given a “guarded welcome” to the decision.
Speaking last week, Paul Higgins, who together with his sister Sharon, now manage the landmark Clonmel business, had this to say:
“We are delighted that the reopening is happening but we’re not delighted about the restrictions being imposed on us to check people’s Covid certificates. It’s welcome but it is a guarded welcome from us,” he began.
The policing of this new legislation is going to cause all sorts of headaches for publicans and restaurateurs such as Mulcahys and the industry is not in the least happy about the difficulties that will be placed upon them. Paul continued: “For instance, if you and your wife come along, how am I expected to deal with it if you have a cert and your wife doesn’t. I have had my own cert printed off and it’s not plain and simple. You have to look at it and see, it has Paul Higgins on it. Do I then have to ask this Paul Higgins has he another form of ID to verify it’s him? It’s going to be very awkward in certain situations. And in a situation like that we could only try and serve both outside or we would have to turn people away,” he said.
“We are in the centre of the town and we don’t have that much outside space here, it’s limited. From that point of view we are small here so we need to be able to open fully as soon as we can. I do know that some others in town with more outside space are doing well at the moment,” added Paul.
Since this pandemic began, a period in which the hospitality industry has been hit more unfairly than any other, the one thing that crops up time and time again with those who try to make their living from serving food and drink, is the complete lack of clarity from the Government that has accompanied each and every step and decision.
Once again it is no different this time according to the Higgins siblings, whose parents John and Connie began this outstanding enterprise back in 1976.
“We haven’t been told what we have to do yet, there has been no clarity at this point with regards QR codes or what technology we will have to use. And that will be another cost for restaurants and pubs as I don’t expect we will be getting that technology for FOC,” said Paul.
“We only find out things at that same time that everyone else finds out. People seem to think that we’re informed before the general public or before it comes out in the news. But we’re not, we’re watching the news headlines like everyone else,” said Sharon.
“Don’t forget there are big costs involved in getting reopened. The first time around we had to throw away a trailer load of food. We are not going to start ordering food again on the presumption that we are going to be in operation on July 26. We need five or six days to get in fresh food orders,” said Paul.

WHO DOES THE POLICING?
The so-called “policing” of the Covid certificates and how they will operate after reopening is another hugely contentious issue, not just with Mulcahys Pub and Restaurant but generally right throughout the industry the length and breadth of the country.
“We have been told that we are to police people and if they’re not vaccinated, they are simply not coming in. Now some will try and get in, or eat outside if they can’t gain admission, but it will be the responsibility of the business owner to make sure the rules are followed,” said Paul, something that obviously, and understandably, isn’t resting well with him.
Reverting back to the lack of clarity issue that has raised its head again Sharon added:
“Apparently the gardaí have no jurisdiction now in the policing of this vaccination cert or Covid passport if you like, the HSE are being given this, and the EHO (Environmental Health Officers) whereas the last time they had no authority on it. And when the health officers were in to us at the time, doing their usual routine health checks, I asked them had they a role and they said it was the gardaí who were policing it. But this time now it seems the gardaí have no risk controls over the Covid passports. And even at that the EHO’s work 9- to 5, so where will the checks be after that time. So it’s all very much up in the air and there’s a lot to find out yet. We need more clarity for sure,” she said.
Paul continued:
“Last summer when we were open we were very busy. About 25,000 people came through our premises at that time and we hadn’t one single case of Covid from the general public and we hadn’t one staff case either because all our tables were socially distanced, and all sanitizers and proper systems were in place. And if people only had an hour and a half on a table they didn’t seem to mind that turnover at all once they were able to get out and have a meal,” he said.
That statistic in itself is a testament to the impeccable standards employed by management and all staff at Mulcahys, which in itself led on to another difficulty that this pandemic has placed upon the vitally important hospitality industry from an economic point of view.
Referring to that period last summer, which was very welcome for the business, it came with an extra unseen cost according to Sharon.
“That period of opening came with huge costs because for the same revenue we had four times the labour costs due to the labour intensity of the work and nobody outside saw that. Yes, we were busy fools for a lot of that time. But you know it was what we had to do when we could do it, and we had to do it together to have our business. And that’s not easy,” Sharon added.
While Mulcahys are fully operational and booked out accommodation/bed wise, currently they are only open in an outdoor capacity serving food and drink. And that in itself, is just one of the many Government decisions that hasn’t made sense either to Paul.
“We have to serve our locals outside but we can serve our residents inside which I can never figure out at all because I would know all my locals and would know their movements while I wouldn’t know my residents. So that for one doesn’t make sense to me,” he said.
In normal times Mulcahys carry a full-time staff of 35-40 with up to another 15 part-time workers, it is a huge payroll and it is a huge benefit to Clonmel and environs.
Not alone is the pandemic costing Mulcahys on an ongoing basis because they are operating in a limited “outside” dining/drinking set-up, it is costing them into the future in the development of their business in a way, according to Sharon.
“We have lost some key members of staff on the two lockdowns, which we haven’t been able to replace yet, and you can understand that, it’s the uncertainty of work now in this industry. These people have mortgages to pay like everyone else and they need certainty with their earnings” she said.
Wrapping up, Paul added: “Look, we definitely need to stay open this time. It is the cost of opening and closing that’s astronomical. There are a lot of theories out there that the pubs are getting paid to be closed and they are making money being closed. And maybe some of the smaller ones are, but we aren’t. Our bills still come in, we still have our standing charges, our electricity and our gas, it’s over a €1,000 a month, every month. We get no reductions. It’s difficult. We need to stay open for good this time,” he concluded.