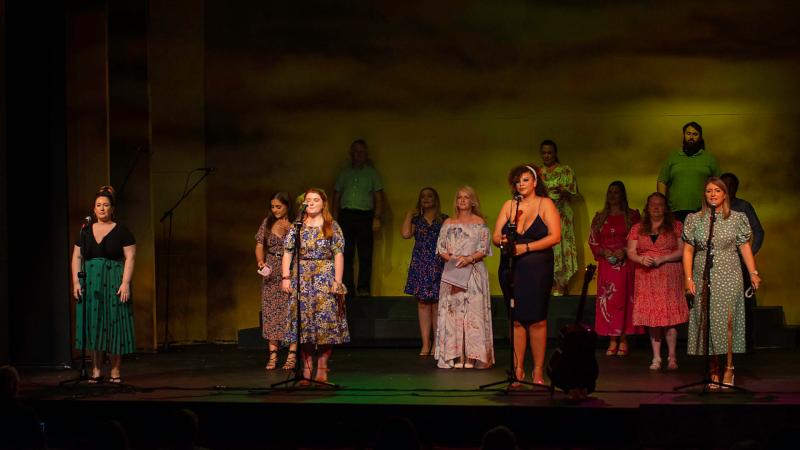 Carrick-on-Suir’s performing arts community sprung back into action last weekend to open the Clancy Brothers Festival after a year-and-a-half of enforced hibernation due to Covid-19.
The festival celebrating the legacy of the world-famous Clancy Brothers ballad group has returned after a year’s hiatus. And it was fitting that one of its opening events was the first live indoor concert to be staged in the 356-seater Strand Theatre since the pandemic began.
The hour-long Carrick Musical Society Goes Folk Vol. 3 show last Friday night was watched by a restricted audience of 50 people, lucky enough to snap up tickets before they were sold out.
There were fabulous performances of well-known folk songs by solo singers, duets and an ensemble of Musical Society members.
The programme ranged from Clancy Brothers ballad group favourites like Will Ye Go, Lassie, Go to more contemporary folk hits such as the Fields of Athenry, Grace and Songbird.
Carrick Musical Society PRO Caolan Deehy-Power, who sang the Garth Brooks song, Ireland, in the show, confessed he was nervous at the prospect of performing again before an audience after such a long period off the stage – nearly three years in his case as he wasn’t a cast member of the society’s last pre-pandemic show Oklahoma. “The nerves were there but they thankfully disappeared when I started singing. It was lovely to be back on stage, even before a small audience,” he said. Such was the demand for tickets, that a second performance of the show is planned for the Clancy Festival on Friday, August 6.
Festival organisers have advised people wishing to attend to keep an eye out for when tickets go on sale on: www.ticketsource.eu/
strandtheatre.
Bee Wild Stage
While the Strand Theatre was the centre point of the evening entertainment last Friday, the festival’s first event was an outdoor music and literary event staged last Friday morning in the grounds of Carrick-on-Suir Heritage Centre.
The Bee Wild Stage of live music performances mixed with recitals of literary works by local writers, took place over two hours during Carrick’s Farmers’ Market.
The Tudor Artisan Hub along with Margaret O’Brien, organised the event that was enjoyed by a good crowd sitting on rugs and picnic chairs in glorious sunshine.
Kayaking
Kayak classes on the River Suir were another highlight of the Clancy Festival’s opening weekend. Two groups of eight budding kayakers took part in the Introduction to Kayaking course hosted by Pure Adventure and organised for the festival by Carrick-on-Suir Lions Club as part of their Diabetes Awareness campaign promoting regular physical activity to help prevent diabetes.
Participants discovered why the river is such a special place, steeped in history and a haven for wildlife, and explored the Suir Blueway from the perspective of the river while having fun on the water.
Music session
An online music session closed the first weekend of the festival on Sunday.
The session was filmed at Keever’s Pub in Faugheen and featured well-known local musicians, Panie Bartley, Maria O’Shea Enright, Breege Phelan and Will McLellan.
They performed an eclectic mix of popular and contemporary folk ballads. The music session can now be viewed on the Clancy Brothers Festival YouTube page. Before the pandemic, the Clancy Brothers Festival took place over five to six days coinciding with the June Bank Holiday Weekend.
But this year’s community celebration has been “re-imagined” to fit in with Covid-19 restrictions and is being run over six weekends.

More photos of the first weekend of the Clancy Brothers Festival can be viewed in The Nationalist's print edition now in local shops.