Local committee has busy schedule during the summer months 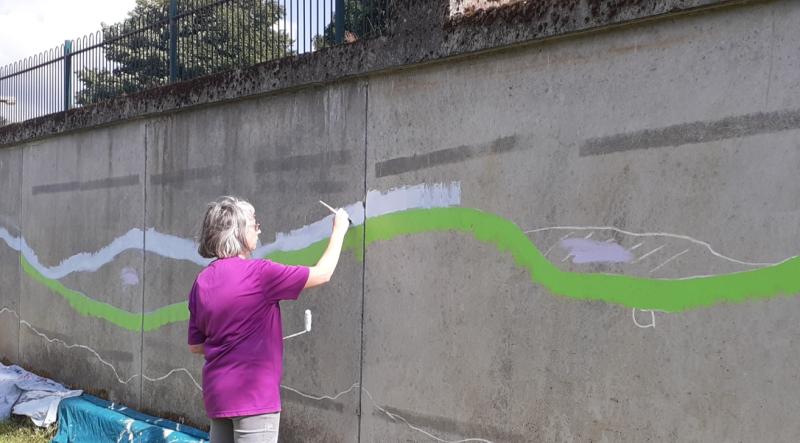 Brigid Teehan painting the mural at Denis Burke Park, Clonmel for next month’s Applefest, as part of Heritage Week

Clonmel’s application for this year’s SuperValu National Tidy Towns competition has been submitted so the local committee members are all on tenterhooks in anticipation of a successful outcome - fingers crossed.
The committee is grateful to Deirdre Murray who put a huge amount of work into the application, assembling all the data and information.
However the ongoing hard work on the ground continues as normal. Teams are out picking litter twice a week, working on the vegetable garden in Old St Mary’s, pruning and mulching the apple trees in Greenane and the Galloping Field.
Regrettably these apple trees, which have been planted in memory of a deceased loved one or in appreciation, have recently been the target of vandals.
Some support posts have been pulled out of the ground and used for bonfires. One tree was pulled out of the ground entirely.
These acts have caused huge distress to the people who view these trees as a memorial to their loved one. What a shame that some people have such little regard for the town they live in and those who work to improve the lived environment.
Recently the committee hosted a visit from members of Cashel Tidy Towns. It was a great opportunity to meet up with fellow tidy towners and chat about their work.
The Clonmel members set up tables outside their hub and enjoyed chatting before taking a stroll over to Old St Mary’s to view the work being carried out there by Bernard and his team.

Above: Beautiful wild flowers on the bypass in Clonmel

Plans are afoot for the committee to visit Windgap Tidy Towns, where they have their own teashop. How fabulous is that?
Members spent a lovely afternoon with Brigid Teehan, who has been tasked with designing a mural at Denis Burke Park for Applefest, as part of Heritage Week.
As part of the All-Ireland Pollinator Plan the committee is reaching out to all the local sports clubs and all businesses who have grounds, and anyone with a garden. The idea is to designategnate an area for a six-week mowing cycle, which would help to ensure that there is pollen available for bees to survive and thrive through the seasons before their winter hibernation.
Weed killers, insecticides and severe mowing in today’s world have put bee populations under severe survival threat and this is an effort to reverse the damage. This would mean cutting the designated area every six weeks, as per a schedule.

Above: Alex Sandor and Damien McGrath strimming around the memory trees at Greenane, Clonmel

The first cut should only be undertaken after April 15 to allow dandelions and buttercups to flower.
The second cut at the end of May allows clover, selfheal, cuckoo flowers and bird’s-foot-trefoil to flower.
The third cut in mid-July allows red clover and other wildflowers to bloom.
The fourth cut should be made at the end of August and the fifth cut at the end of October. Perhaps this is something you could do too.
There is still time to get out and enjoy the wildflowers along the bypass. You might even be lucky enough to gather some seeds for next year.
You can find the Tidy Towns committee on Facebook and Instagram @clonmeltidytowns for more information about their work.