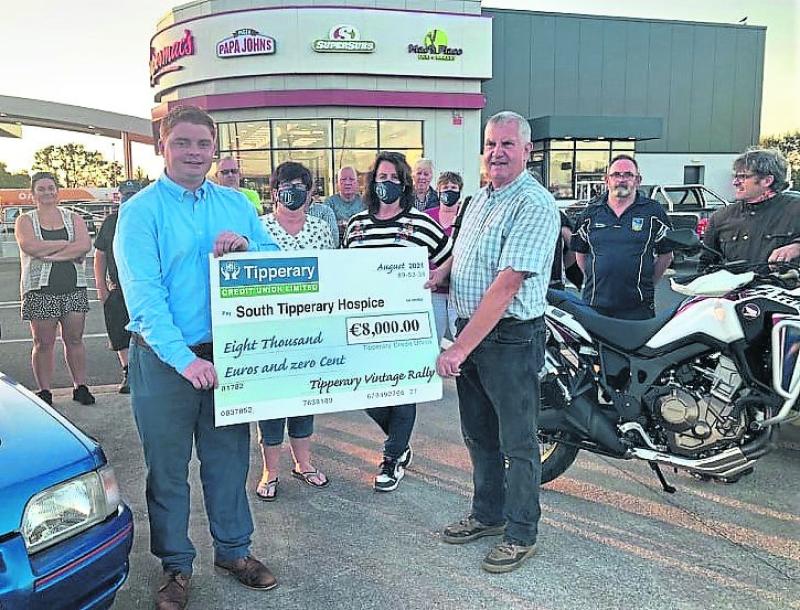 Francis O’Regan, Chair of the Tipperary Vintage Rally presents the €8,000 cheque to John O’Heney, Peace Commissioner, accepted the cheque on behalf of the Hospice.

The Tipperary Vintage Rally has been at it again...raising money that is for their chosen charity, South Tipperary Hospice Movement.

Francis O’Regan, Chair of the Tipperary Vintage Rally said that they were delighted to present a cheque for €8,000 - which brings the total amount donated to the Hospice this year to €10,000.

The money was raised through a bike run through various parts of the county and along the Limerick border. Their sole aim is to raise money for the South Tipperary Hospice Movement and this year they also gave funding to the Tipperary Branch of the Irish Red Cross. John O’Heney, Peace Commissioner, accepted the cheque on behalf of the Hospice. John is a Board Member of South Tipperary Hospice and he said that it is only through the great work of organisations like the Tipperary Vintage Rally that the Hospice can sustain itself and keep the services in the area.

It costs in the region of €900,000 to keep the movement funded and only one third of that comes from Government so there is a huge shortfall that needs to be funded each year and that is done by the voluntary sector. The presentation ceremony took place at the Tipperary Town Plaza and was attended by the members of the Vintage Rally including Frances O’Regan, Chairperson, Rosie Finnan, and by representatives of Supermac’s.