Monsignor Michael Olden was a man of “faith, kindness and wisdom” 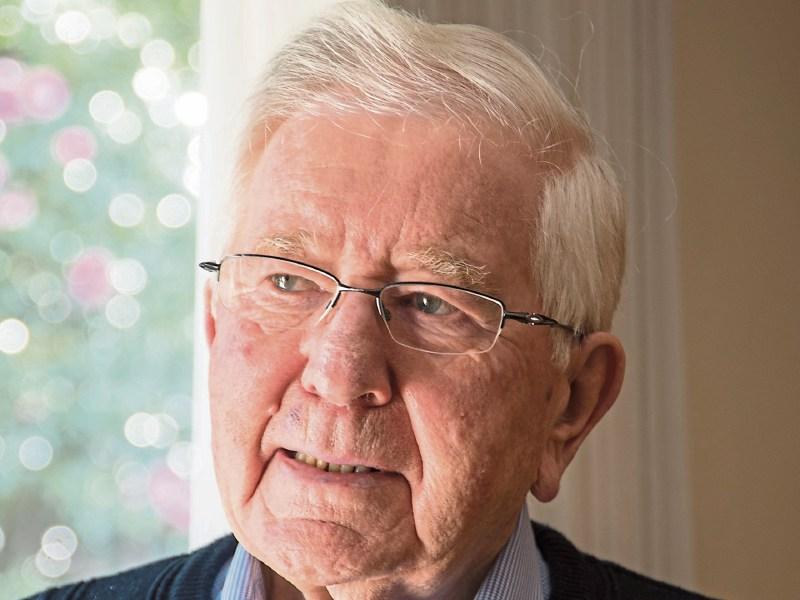 Tributes have been paid to the late Monsignor Michael Olden, former parish priest of two south Tipperary parishes, who was also President of St Patrick’s  College, Maynooth for eight years.

The native of Cappoquin in county Waterford died in Dungarvan Community Hospital on Monday, August 30 following a brief illness.

Msgr served as President of Maynooth College from 1977 to 1985 after which he served as PP of  Kilsheelan/Kilcash parish and later Ss Peter & Paul’s Parish in Clonmel.   He went on to to serve as  PP of Tramore in county Waterford.   Msgr Olden was buried at Mount Melleray Abbey following his Requiem Mass at the abbey’s church on Friday, September 3.

Bishop of Waterford & Lismore Most Rev Alphonsus Cullinan was  chief celebrant at his funeral Mass and in his homily recalled Msgr Olden’s life and dedicated service to the priesthood.

He recounted that Michael Olden was born in Cappoquin in 1935 and educated at Mount Melleray Abbey College where his father taught history and French.

He progressed  to University College Cork and then Maynooth where he was ordained in June 1960 by Archbishop John Charles McQuaid.

He spent a brief period in Southwark, London, then served in various chaplaincy posts in the Diocese of Waterford & Lismore in the De La Salle Scholasticate, Faithlegg and the Little Sisters of the Poor;   taught in Waterford Regional Technical College and St John’s College, Waterford before undertaking postgraduate studies at the Gregorian University in Rome in ecclesiastical history.

In October 1966, he was appointed to the staff of St Patrick’s College, Maynooth.  He  served as Dean of the College, as Professor of Ecclesiastical History and finally as College and University President from 1977-85.

“The distinction of hosting Pope John Paul II on his visit to the College in 1979 fell to Msgr Olden, during which the foundation of the John Paul II Library was laid,” Bishop Cullinan continued.

“Msgr Olden was also responsible for initiating fundraising activities in the United States, developing the fabric of the College and was deeply involved in the planning for the building of the new library. As well as being a steady hand and calming influence in the turbulent college years of the early 1980s.”

Bishop Cullinan said Msgr Olden returned to the Diocese of Waterford and Lismore in very late 1984 to serve in parish ministry, first as parish priest in Kilsheelan, then Ss Peter & Paul’s, Clonmel and then as PP of Tramore.

Msgr Olden also  served as Vicar General under Bishop Cullinan’s predecessor Bishop William Lee and was a great support to him.

He was often in demand as a homilist at important diocesan liturgies, including Bishop Cullinan’s ordination as bishop of the Diocese.

Msgr Olden retired from full-time ministry in 2009 and maintained his interest in history and Irish church history.  Bishop Cullinan recalled how he published a “wonderful” history of the Diocese of Waterford & Lismore in 2018 called: The Faith Journey of the Deise People.

“I am not going to canonize Monsignor Michael. I wish simply to be honest. But I can only find good things to say about him,” Bishop Cullinan continued.

“I think it true that he had a solidity, a calmness, a tranquillity and sense of balance. The reason for this I propose is because of his deep study of Church history.

“He saw how the Church was always ailing because  it is made up of frail human beings. But the power behind the Church propels her forward and if we have faith to see things from a supernatural point of view then we have a solid hope no matter what is happening around us.”

He said Msgr Olden generously gave 20 years in the service of the college in a variety of roles, initially joining the staff of the College as Dean in the same year as lay students started studying in NUI Maynooth in 1966. Like Bishop Cullinan, he recalled the distinction Msgr Olden  had of hosting Pope John Paul 11 on his visit to the College in 1979 when he laid the foundation of the now John Paul II Library, the university library.

“Successive presidents have built on the foundations of his work and the network of loyal friends introduced to the college. As a result, not only was the John Paul Library built but the college chapel magnificently restored, the Pugin buildings reroofed and refurbished, and many other capital projects completed that would have been otherwise impossible.

“In his time in Maynooth, he distinguished himself not only as an administrator, but also as an academic, contributing to Archivium Hibernicum and other journals.

“Above all his achievements and legacy here in Maynooth, Monsignor Olden will be remembered for his priestly witness, his faith, kindness, wisdom, approachability, good humour, eloquence, and many other fine human and spiritual qualities.

“These were the very same qualities that enabled him take up with ease pastoral ministry in the Diocese of Waterford &  Lismore as parish priest in the parishes of Kilsheelan/Kilcash, Clonmel and Tramore, where he ministered with distinction while also much sought after as retreat director in every diocese of the country.

“Despite the demands of parish ministry and retreats, his enduring bond with the college was deeply appreciated: as the President of the Maynooth Union and in his role as a trustee and regular contributor to The Furrow.” Rev Prof Mullaney  pointed out that in recognition of Msgr Olden’s contribution to St Patrick’s College Maynooth, a special scholarship was initiated in 2020 in the year of his diamond anniversary of ordination to the priesthood. The  Monsignor Michael G Olden Scholarship will be awarded annually to a postgraduate student, lay or cleric.

“This small gesture is a sign of the esteem with which Monsignor Olden was held here in St Patrick’s College,” he concluded.