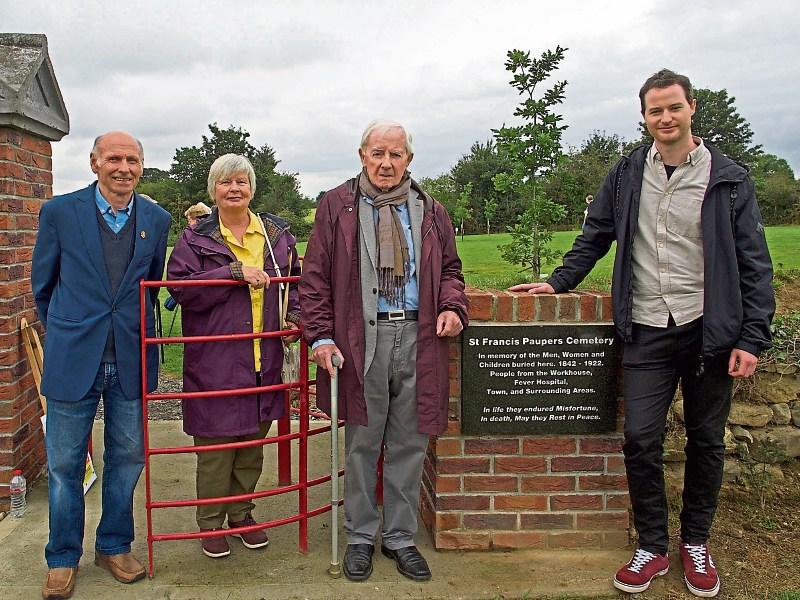 More than 150 people gathered at a once forgotten paupers’ cemetery in Carrick-on-Suir last Sunday afternoon to mark its restoration and to remember and pray for the unknown souls buried there.

Bishop of Waterford & Lismore Alphonsus Cullinan and Rev Victoria Lynch of the Fiddown Union of Church of Ireland Parishes led the ecumenical service and blessing of St Francis’ Paupers’ Cemetery, which was a Carrick-on-Suir Workhouse burial ground from 1842 to 1922.

The service was the culmination of five years of painstaking restoration work led by the five-strong Carrick Workhouse Burial Ground Restoration Committee with the help of local volunteers and funding from Tipperary County Council, local community groups and private donations.

The overgrown wilderness that lay hidden and forgotten for nearly a century has been transformed into a beautifully maintained burial ground that as Restoration Committee chairman John Connolly summed up “gives due respect and recognition to the many poor people buried there”.

The organisers were blessed with a balmy afternoon for the ecumenical blessing of the cemetery behind Cláirín housing estate that also includes an adjoining infants’ burial plot.

As birdsong echoed through the graveyard, Bishop Cullinan began the half-hour local service by telling the congregation in his greeting prayer that “no one is a pauper in the sight of God, and all who are buried here are cherished and loved by God”.

The readings and prayers that followed  were interspersed with hymns performed by Carrick-on-Suir Brass Band and sung by Pat Quinn Bolger.

At the end of the service, Bishop Cullinan thanked all the volunteers involved in renovating the cemetery.

“I saw a photo of this place as it was in 2016 and here we are today. How beautiful it has turned out and that is because of the work of a lot of people.

“We remember all those who lived in hardship in this area and are buried here; poor people with dreams and hopes the same as ours.

“We would be mistaken in thinking that we are any better than them. We are all human beings on a journey through life, “ he said.

Bishop Cullinan expressed the hope that everyone  at the ceremony would fulfill their dreams and hopes in life and work together to make the society they live in a better place with the help of God.

Rev Victoria Lynch said sadly the people buried at this cemetery didn’t receive the “preferential option of the poor” during their lives.

“Today we give thanks that the team who restored this burial ground has with great care poured passion, dignity and love into that wound.”

Writer, poet and historian Michael Coady shed some light on the history of this once hidden burial ground, which he has visited since coming to live in Clárín over 40 years ago.

“My children on our walks with me came to know it as the Third Field. I understand it to have been supplementary to the original workhouse burial ground located behind the present Treacy Park, and intended for the inmates of that institution of misery, shame and humiliation in addition to unidentified beggars, fever victims, unknown bodies from the river and perhaps stillborn infants also. It is a sad, sad history from those times and of those times.

“We actually know very little about it. The official Carrick Workhouse records were lost in the Civil War burning and destruction of the 1920s but it is possible that some usage of the marginalised burial ground continued unofficially into later years.”

He recalled interviewing in the 1970s, Mary Kate and Nellie,   daughters of the last coffin maker who supplied the workhouse John Power, nicknamed “The Dagger”, who was a carpenter in the town.

“They could vividly remember their father making coffins for the Workhouse, how he’d often have to take them by ass and cart to this burial ground where he, along with the gravedigger, might be the only living people present to offer a prayer over the dead man, woman or child.”

Mr Coady said he was listening to the birds singing as he spoke and welcomed the decision to name the burial ground after St Francis, who so loved birds, nature and the poor.

Restoration Committee chairman John Connolly  recounted how the restoration  began as a Kildalton College student community  project in 2016 but due to the scale of the work required it turned into a major restoration project.

He formed a committee with  four other local people to spearhead the restoration and they obtained professional advice from archaeologists and environmentalists to ensure the cemetery’s restoration was  sympathetic to those buried there and to the surrounding environment.

He described  the fixtures of historical significance to the town and its hinterland that now form part of the cemetery.

He said the limestone caps on top of the entrance piers came from the former Burke Asylum that was located beside the Fair Green, while the entrance gates and a 9th century bullaun stone used as a holy water font came from Kilkieran Cemetery at Skough, which is over 1,200 years old.

Inside the cemetery there is a statue of St Joseph  from Carrick’s former St Joseph’s Domestic Science School; an iron cook pot used in Carrick Workhouse and  an iron cross erected on its original base, which were found in the graveyard during the restoration works.

Pieces of pitch pine timber and iron roof brackets salvaged from the roof of St Molleran’s Church during recent refurbishment works were used to make a cross and seat for the infants plot.

Another large cross in the cemetery was made from timber dating from 1849 salvaged during roof renovations at Waterford Courthouse. The  small cross on the cemetery's brick  altar is also made from this wood.

Alongside this,  37 oak trees, sponsored by local donors, were planted in the cemetery last year, while 85 yew trees were planted on a border  ditch  this spring.

Mr Connolly said the restoration project was hard but very joyous work and he thanked all who worked on  it, assisted the committee  and provided funding.

He  hopes in the future a research project can be set up to find the names of people who lived in Carrick Workhouse. It’s also     planned to celebrate  Mass at the cemetery annually and the council has been requested   to erect finger post direction signs to the cemetery for  the public.