Tipperary colleague, friend and community activist remembered on his anniversary 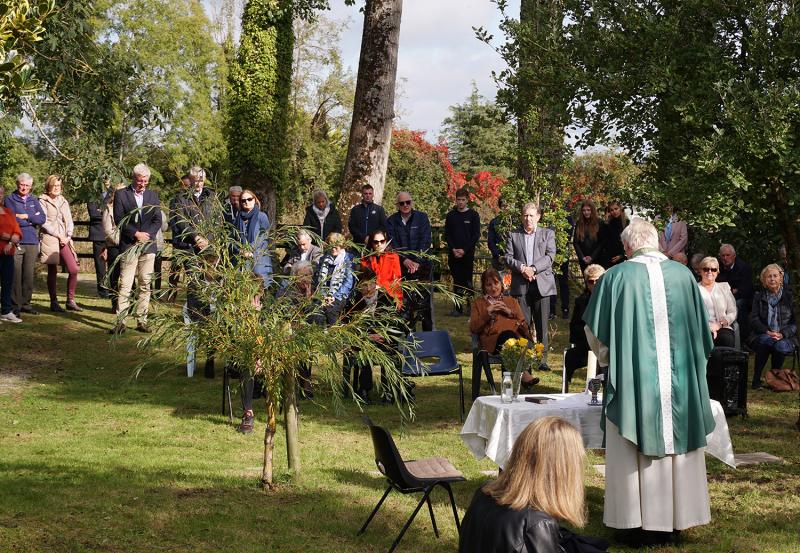 The Group gathered at Tobar Íosa last Sunday for the First Anniversary Mass of our colleague and friend Dermot O’Connor last Sunday. One of Dermot’s last projects was being involved in a tidy up of the Well area and his friend Ger O’Brien headed up a committee of volunteers along with Cahir Tidy Towns who maintain the Well during the year.

That afternoon the mass was said by Fr. Con (a friend of the family) and music was provided by the ever accommodating Michael Harty and members of Cahir Comhaltas. We would like to thank the local musicians and wish them continued success. Dermot’s family members and friends from Cahir Gaa as well as neighbours gathered to celebrate the mass in glorious sunshine and with the birds singing in the background it was truly a fitting venue for a great member who got a lovely tribute 12 months after his passing when Covid rules didn’t allow an attendance in the Church last year.
On the domestic scene, we were busy tidying up some bushes and shrubs and will be removing geraniums soon for winter storage. Litter picking is a daily chore and the Cahir Youth TT Coláiste groups are doing great work in the community and will be a huge help to the town in the coming year.
The works have started on the Swiss walk and last week alone there was a group of 15 and another of 18 on the St. Declans way, at the weekend there were others on the path and again next week another 18 from Kerry are around. It’s very noticeable now to see people on the trail with their backpacks. Also it was great to see members of Knockmealdown Active arriving with their Kayaks on Sunday to make a trip downriver to Ardfinnan.
We will be winding down now the long evenings are upon us, but we still have bits to do in daylight. Strimming of wildflower beds and preparing for tree planting starts again in preparation for next spring so instead of closing up we are starting up and results of the National Competition will be announced in November where we hope to gain a few points and hold onto our bronze medal.