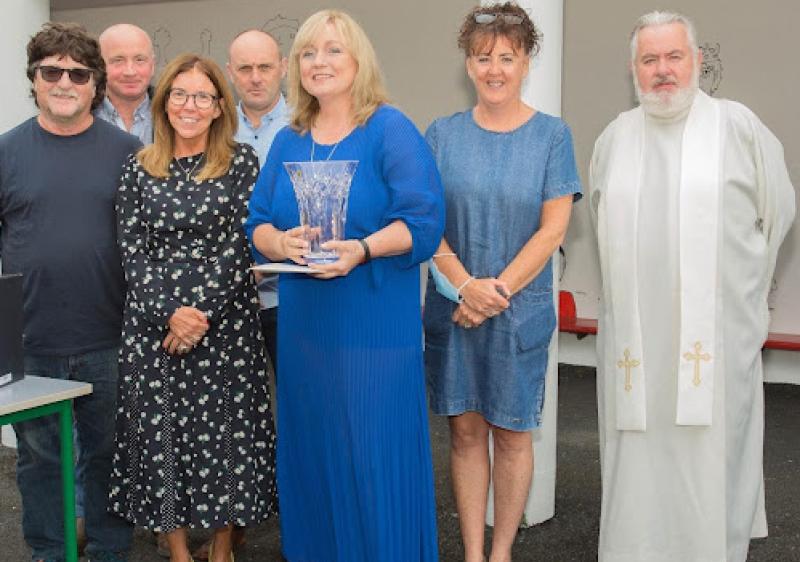 On Friday, September 3, the students, staff, parents and BOM of Scoil Mhuire NS gathered on the basketball court of the school where local parish Priest Fr. Danny O’Gorman celebrated an open-air Mass of Thanksgiving for Muinteoir Barbara Lutteral.
Barbara leaves Scoil Mhuire NS after 12 years as Principal to take up a new teaching post closer to her new home in Paulstown, Co. Kilkenny.
The Chair of the BOM Ms. Noreen Reilly paid tribute to Barbara during the Mass.
Noreen said: “A wise person once said “100 years from now it will matter not what my bank account was, the sort of house I lived in, or the kind of car I drove, but the world may be a different place because I was important in the life of a child. She referenced the readings chosen by Fr Danny for this very special occasion, which spoke about love of God, love of neighbor, and love of learning.
Noreen stated that as she was listening to the readings, she couldn't but reflect on the difference that Muinteoir Barbara has Barbara, to the many children whose lives she has been important to over the course of her career and particularly during her time as Principal in Scoil Mhuire Kilvemnon. Noreen said she knew that Scoil Mhuire will always hold a special place in Barbara’s heart. 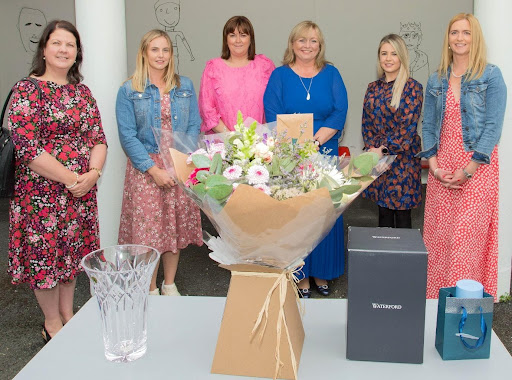 Noreen (a teacher herself) reminded those present that as teachers in loco parentis, we are privileged to have children entrusted in our care, she said that teachers on a daily basis teachers show love of God, love of neighbour, and love of learning.
She told the boys and girls of Scoil Mhuire, that she fondly remembered her own primary teachers and the difference that they made to her own life. Noreen said, “What a teacher writes on the blackboard of life can never be erased”.
Noreen concluded her thanks to Muinteoir Barbara on behalf of students, staff, parents, Parents Council, and the Board of Management by saying:
“Ba mhian liom fíor bhuíochas a ghabháil leat, as ucht an Dea obair, agus as ucht an comhoibriú go léir, thar na blianta. Fanfaidh Dea chuimhní a laethanta scoile beo, go deo, i measc do iar scoláirí, agus i measc muintir na háite seo.  Guím gach rath, agus sonas ort anois, agus tú ar thairseach ré nua i do shaol. Beir bua agus beannachtaí”
After the celebration of Mass, gifts were present to Barbara. On behalf of students a beautifully engraved silver pen was presented by the youngest students in the school Eliza and Aoife and the oldest pupil Philip presented a beautiful bouquet of flowers to Muinteoir Barbara. A stunning Waterford Crystal Vase and gift cheque was also presented on behalf of parents and the BOM of the school.
Barbara, in an emotional farewell said she was extremely humbled by the afternoon’s event. She reminded the children that they were so blessed to be in such a beautiful school. She said of the pupils that they were 25 amazing stars and that they had amazing parents. She thanked all pupils and parents, saying that it was they who made the school.
Barbara continued by thanking all staff Clodagh, Eimear, Susan, and Liz for their wonderful support over the years, saying that Scoil Mhuire Kilvemnon was like a little family. She told all present that her new school is so much bigger and that it made her appreciate her time in Kilvemnon even more. Barbara recalled her first day in Scoil Mhuire saying she will never forget the Céad Míle Fáilte she received and said that today Scoil Mhuire was giving her the biggest farewell also. Barbara said she was blessed with her staff and thanked Liz and her family for all their support over the years. Barbara said that Scoil Mhuire was blessed to have Liz as a secretary, saying that Liz was like a mammy to pupils and had been a dear friend to her over her time in the school. This was greeted by a round of applause by all present.
Barbara also thanked the board of Management for their ongoing support of the school. She concluded by saying she that looks forward to returning to Scoil Mhuire for a visit into the future to see how brightly the 25 stars shine.
Homemade refreshments were then served on the basketball court for all present and the boys and girls in Scoil Mhuire were treated by Muinteoir Barbara to the many delights from Ice-cream van, pupils also recieved individual tubs of sweets and the junior room students were gifted a beautiful stationary pack from their former teacher.
The staff and chairperson completed the afternoon with dinner in Langton’s Hotel Kilkenny.
The school community wish Barbara lots of love, luck, laughter, good health and great happiness as she embarks on the next stage of her career, closer to her new home.
Go n-éirí an tadh leí.