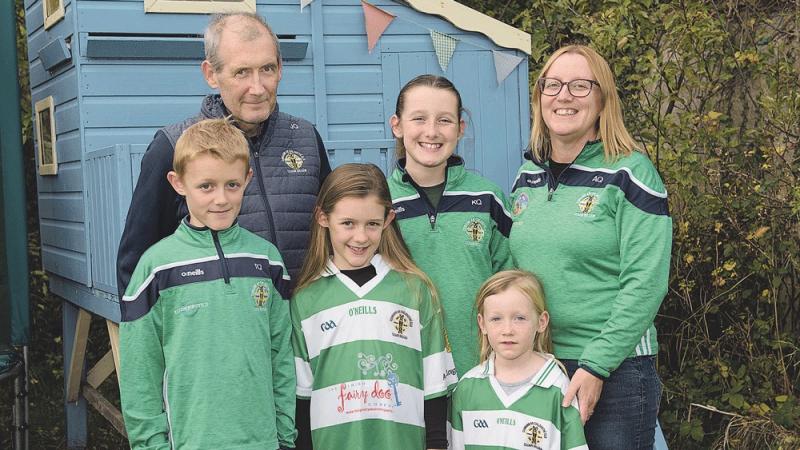 John Quinlan pictured with his family

John was diagnosed with a tumour on his liver and his former team mates from 1987  will travel to Dublin to play an exhibition game to help raise funds for ongoing treatment.

Communities in Tipperary and Dublin are rallying together to support and raise funds for Moyne Templetuohy native but  longstanding Clondalkin resident and Round Tower GAA Club mentor, John Quinlan, following the diagnosis of a tumour in his liver.

John Quinlan, who was part of Moyne Templetuohy's minor hurling team in 1987,  was diagnosed with having a tumour in his liver in June this year following a routine blood test for high blood pressure. When the blood tests showed abnormalities, an ultrasound revealed that he had an inoperable tumour which is growing up near the arteries in his heart.

John has  also played and assisted with the Round Tower Adult Junior hurling teams over many years alongside his wife Angela, who is also a mentor. John and Angela’s four children, Kitty (13), Tom (11), Mary (8) and Sorcha (5) all play on club teams for Round Tower GAA Club.

“It was very much out of the blue, he was just getting routine blood tests done,” said John’s wife Angela in an interview with the Evening Echo newspaper. “The way it is growing there is no way of removing it, so it is all about maintaining it and keeping the tumour under control.

“John is having chemotherapy at the moment, but there is only so much chemo he can take. They hope to find a drug which is called a targeted therapy and they pinpoint the mutation in the cancer.”

The biopsies are critical for determining John’s future course of treatment. A biopsy of the tumour was sent to James’ Hospital but unfortunately a match for the mutation could not be found, therefore it had to be sent to Germany to be analysed.

After giving so much time and dedication to Round Towers GAA Club and to the people of Clondalkin through the years, the entire community have come together to raise money to help fund the process of sending the biopsies abroad to be analysed and to help with John’s medical expenses – already raising an incredible €30,170 through a GoFundMe page.

John, who is currently at home after spending 70 days in Tallaght Hospital receiving treatment, says that he is “humbled” by the support he has received.

“It inspires you and humbles you as a person when you get so much support, because I never would have thought there were that many people that knew me let alone would go out of their way to help me,” John told The Echo.

“It is kind of like the film ‘It’s a Wonderful Life’ – you don’t realise how many people you can actually touch in your lifetime.”

Angela echoed this by saying: “We are completely overwhelmed by the generosity and support from people. From the minute he was diagnosed, everybody in my estate were dropping in dinners, offering us lifts or if the kids needed to get anywhere there were no questions asked.

“We want to say a huge thanks to everybody who has helped us out. All those little things mean so much to us.”

A fundraising day organised by Round Tower GAA Club and John and Angela’s friends and family will take place  tomorrow Saturday at Monastery Road GAA facilities to help raise funds for John’s journey.

Round Tower will host a festival of GAA games against teams from Moyne/Templetouhy GAA Club including members of that 1987 minor hurling team who will take on a Round Towers veterans outfit - it should be quite a sepctacle and the Tipperary lads are looking forward to catching up with, and supporting, their former team mate.

“It will be a great day for the kids, because my kids in particular have had a hard time in all of this because there is a lot of uncertainty and you just don’t know what is going to happen, it is just the nature of the illness,” John explained.

“The children find it hard to understand and they need support as well. My son and me would have done a lot of things together and now we can’t really do anything.”

In addition to the people within the community, members of Round Tower GAA and all of the staff in the oncology department at Tallaght Hospital, John said he has found comfort in speaking to those who have had similar illnesses before.

He added: “It is always great to talk to someone who has had it and give you information about it and tell you it is not always doom and gloom – you always have to look on the bright side of things and be positive, because if you’re not positive you can end up in a dark place.”

If you would like to donate to the fundraiser for John or to find out more information, you can go to ‘John Quinlan Gives…We Give Back’ on GoFundMe.