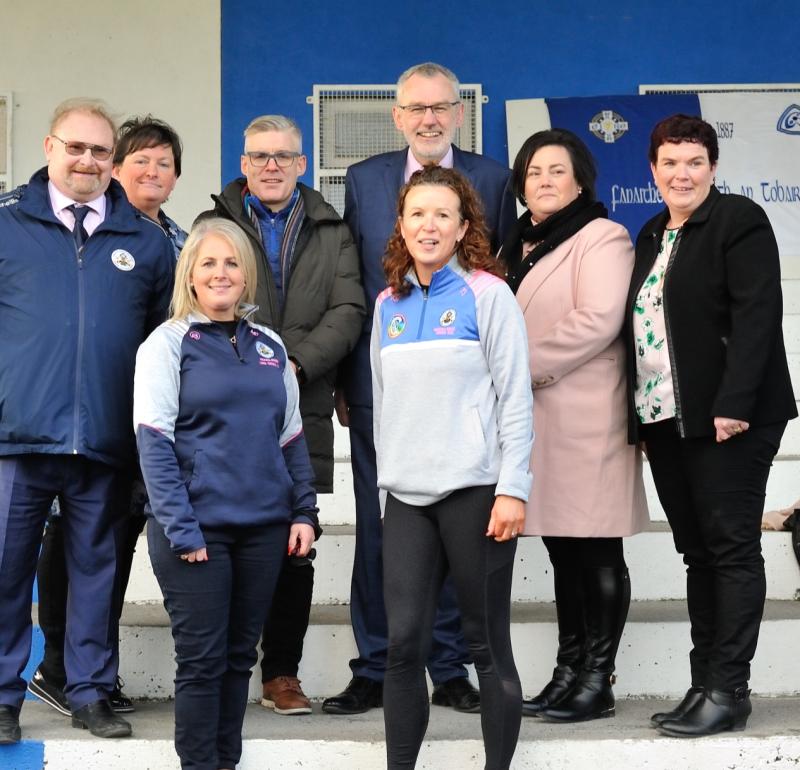 New Inn was a kaleidoscope of colours last Saturday, with Christmas lights decorating the village, creating a virtual winter wonderland.
The club was adorned with blue and white flags to greet the president of the GAA when he came to visit the club to perform the opening of the all-weather pitch and walkway. It was a beautiful and dry blustery day, fantastic weather for December.
Conor English was MC and started proceedings by introducing John Hally, chairman of the club. John welcomed an Uachtarán Larry McCarthy, county chairman Joe Kennedy, west chairman Tommy Hayes, local county councillors, Rev Fr Mattie McGrath and a fine attendance to New Inn and Rockwell Rovers field, Pairc na nGael. John provided an overview of club activities over the past few years on and off the pitch.
Since Covid has come to disrupt our lives, the club has been busy and proactive with the addition of a gymnasium, astro-turf goalmouths, an all-weather pitch and walkway.
On the playing side, the club won the county intermediate football title last year and followed up by winning the Tom Cusack Cup this year, thereby consolidating their senior status.
Development committee chairman Andy Hennessy addressed the attendance. He said this development was a massive community effort by the people of New Inn and Knockgraffon and surrounding areas, with every house in the parish supporting the development.
Over the last three years, over €90,000 has been raised through various fundraisers. The GAA is the heartbeat of the community, and the astro turf is a place where young and old can train and play games all year round, and the walkway will be an area where the more senior members of the community can meet and exercise in a safe environment.
Thanks are extended to all involved; Mothers and Others, ladies football, camogie, the juvenile and senior clubs, who supported the development all the way.
The first sod on the new development was turned on January 7, 2021 with a lot of support from local contractors, farmers and club members who gave freely of their time with tractors, dumpers and machines for the initial preparation of the site.
The project was split into four different contracts, so in effect the development committee were the main contractors. This allowed 90% of the material purchased to be sourced locally, and with all subcontractors based less than 10 miles from the site, this resulted in 95% of the €250,000 spent going back into the local economy. 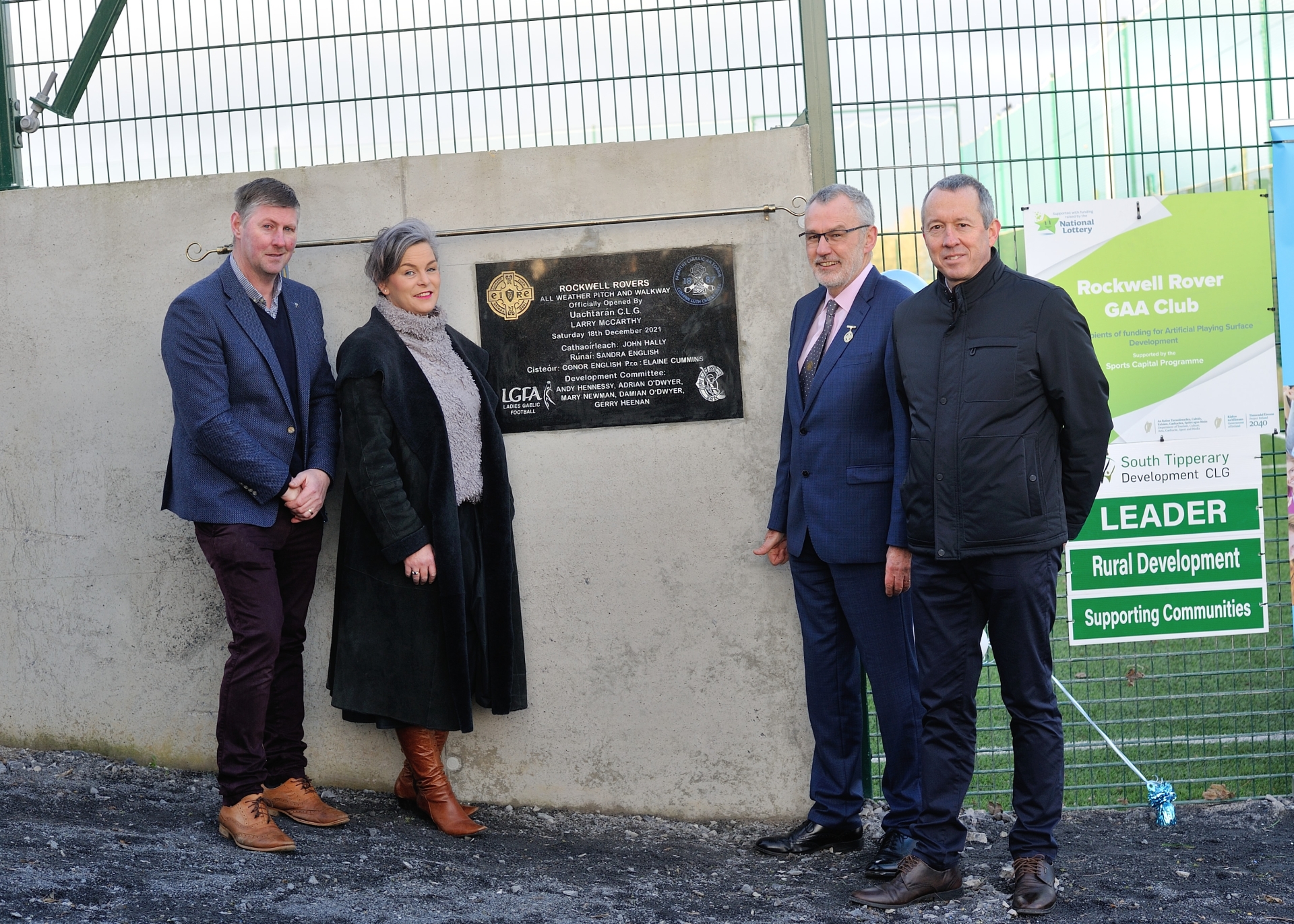 Pictured at the official opening of Rockwell Rovers’ walkway and all-weather pitch on Saturday last, December 18 at Pairc na nGael, New Inn were the development committee with the president of the GAA, Larry McCarthy.
From left to right: Adrian O’Dwyer, Mary Newman, Uachtarán Larry McCarthy and Andy Hennessy.
Missing from photo, Gerry Heenan and Damian O’Dwyer

Thanks to Liam Maher Plant Hire, Premier Pitches/Cummins Fencing, Eoin Shine, Electrical Contractor and the Barron Family who made it all possible.
Thanks are extended to South Tipperary Development Company for their Leader grant, with special thanks to Mary Kinane and Mary Barry for their help with all the paperwork; without their support the walkway would not have gone ahead.
Thanks are extended to Tipperary County Council for their grant and to the local representatives for their support.
Thanks are also due to Cahir Credit Union, Tipperary County Board, Munster Council and Croke Park for all their help and advice. Thanks also to the senior executive committee of Rockwell Rovers; chairman John Hally, secretary Sandra English and treasurer Conor English for their help and support.
The club owes a deep debt of gratitude to the field committee, led by John Cooney and Jimmy Looby for all their work on the field and the new development and to the development committee of Andy Hennessy, Mary Newman, Gerry Heenan, Adrian O’Dwyer and Damian O’Dwyer, who put in trojan work over the last four years in making this development a reality.
Very Rev Mattie McGrath blessed the walkway and astro turf before the president did the honours.
County GAA chairman, Joe Kennedy spoke glowingly about the development and the impact clubs such as Rockwell Rovers are having on rural communities right across the country.