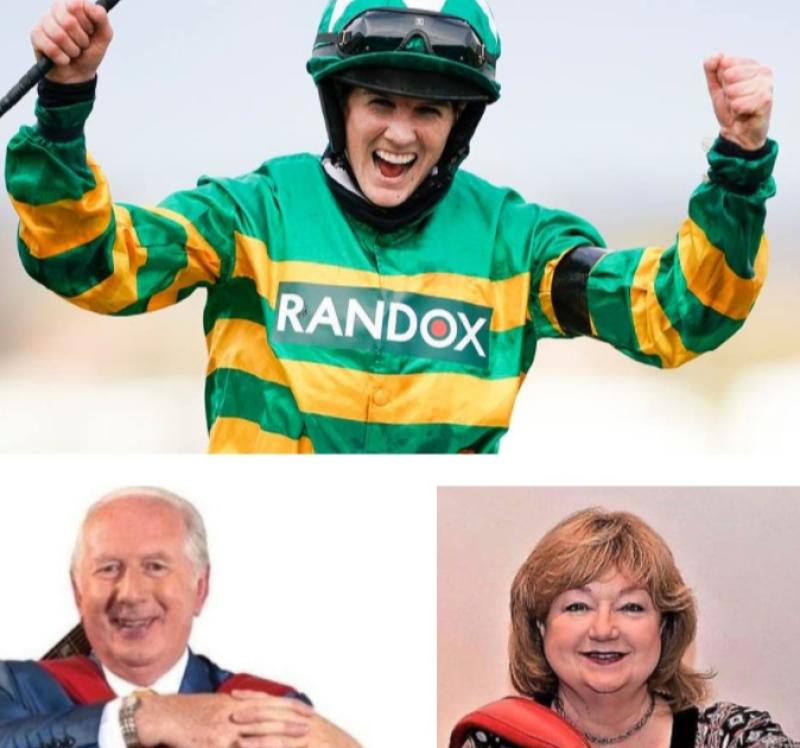 The Ballad of Rachael Blackmore is a newly composed song which tells of her great achievements as a National Hunt jockey.

The song has been written by Tipperary native Billy Morrissey who said recently, “Rachael Blackmore is a real legend who has lifted the spirits of the nation at a time when we all needed something to cheer about.

“Long may she continue to win and inspire our young people to believe anything is possible and not to be afraid to dream big.” The new song The Ballad of Rachael Blackmore has just been recorded by another legend, the great Mick Foster (of Foster and Allen) along with his wife, musical virtuoso Moyra Fraser.

Mick is a big fan of National Hunt racing and has owned several horses down through the years including the famous Nancy Myles which Mick co-owned with Tony Allen. He currently has a horse in training and is looking forward to seeing it running soon.

Though he lives close to Mullingar in Westmeath, Mick Foster also has very close ties with Tipperary. His mother Jane Parker came from Moneygall, and her grandfather, Ned Maher played in the first All Ireland hurling final in 1888 which was played in Birr, and ended in victory for Tipperary when they defeated Galway.

Another relation of Mick’s, the great Matt Hassett, captained Tipperary in 1961 when they won that year’s All Ireland Hurling final.

Mick Foster and Moyra Fraser have done a super job on the recording and lively arrangement of the new song.

The accompanying music with the bodhrán and drum beat as well as accordion and banjo will have hands clapping and feet tapping wherever it is played. The song is being released on the Sharpe Music label and is available for download from all music platforms. Special souvenir hard copies are available to buy with all funds raised going to the Irish Injured Jockeys Fund.

Born in Killenaule, Rachael Blackmore had an interest in horses from an early age. When she finally decided to try to make a living from becoming a full time jockey, she feared that it might not work out for her. But she need not have worried. Her recent success reads like a Fairytale. In 2021 alone she won The Champion Hurdle at Cheltenham on board Honeysuckle, becoming the first ever female jockey to win this prestigious race. Subsequently Rachael went on to be crowned champion jockey at the 2021 Racing Festival in the Cotswolds.

Then Aintree beckoned and in April of this year, riding Minella Times, she became the first ever female to win the greatest steeplechase in the world, The Grand National. These are phenomenal achievements by any standards.