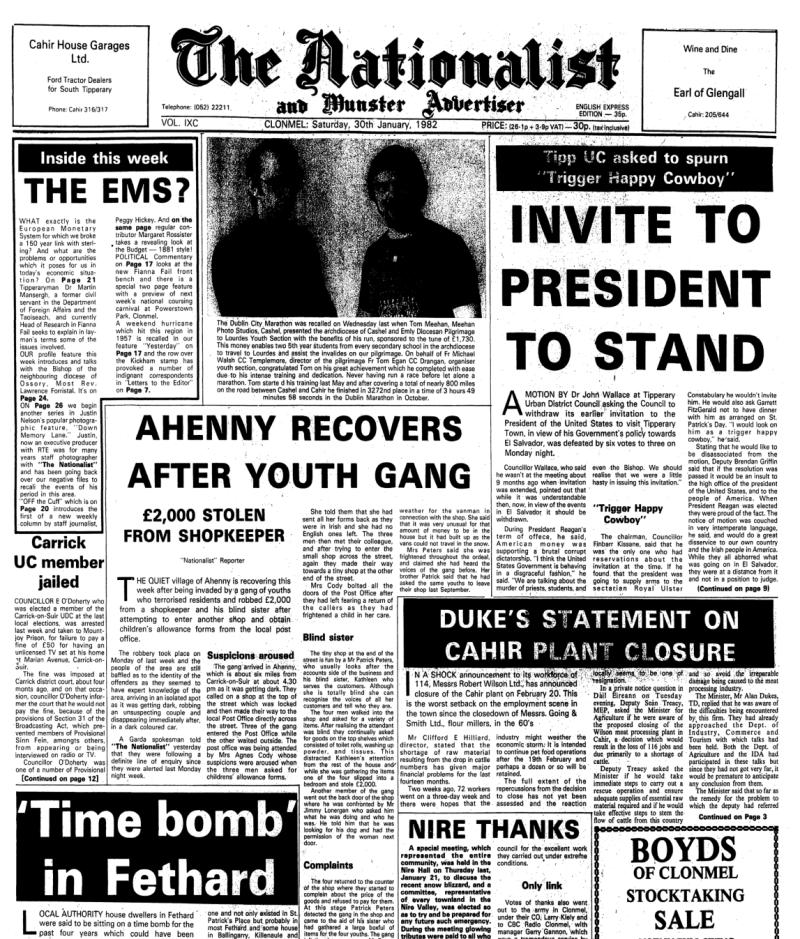 Forty years ago this week, for our issue of January 30, 1982, we led with a front page story from Tipperary Urban District Council.
A motion was put before the meeting by Dr John Wallace asking the council to withdraw an invitation it had extended to the then President of the United States, Ronald Reagan, to visit Tipperary Town, in view of the US Government’s policy at the time towards El Salvador. The motion was ultimately defeated by six votes to three.
The POTUS came in for some heavy hitting at the meeting with the chairman, Cllr Finbarr Kissane, referring to the former Hollywood actor as “a trigger happy cowboy”.

ROBBERY IN AHENNY
Also that week we reported that the quiet village of Ahenny was recovering after being invaded by a gang of youths who terrorised residents and robbed £2,000 from a shopkeeper and his blind sister after attempting to enter another shop and obtain children’s allowance forms from the local post office.

CAHIR BUSINESS CLOSES
The front page also included a story on a shock statement to its workforce of 114, Messrs Robert Wilson Ltd, announced the closure of the Cahir plant on February 20. This, the report said, was the worst setback on the employment scene in Cahir since the closedown of Messrs. Going & Smith Ltd, flour millers, in the 1960s.

UNLICENSED TV SET
Also that week we informed readers that a Carrick-on-Suir UDC member had been arrested and taken to Mountjoy Prison for failure to pay a fine of £50 for having an unlicensed TV set at his home at Marian Avenue, Carrick-on-Suir.
Councillor Eddie O’Doherty was one of a number of Provisional Sinn Féin public representatives who had agreed to refuse to pay their TV licences fee while the terms of the Section 31 of the Broadcasting Act 1 remained in place.