YESTERYEARS: A black week in Tipperary 20 years ago with tragedy everywhere 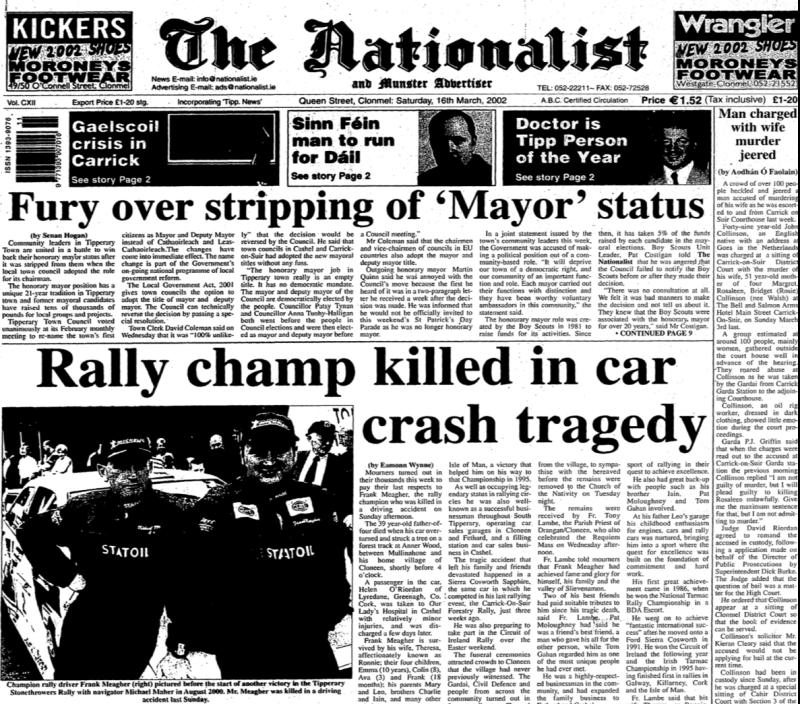 Twenty years ago in March 2022 must have been one of the saddest front pages we ever carried with the tragic death of Motor Rally champion Frank Meagher included.

We carried tragic news on our front page of March 16, 2002, of the death of motor rally champion Frank Meagher, Cloneen. The 39-year-old, who ten years previously had won the Circuit of Ireland Rally, died when his car overturned and struck a tree on a forest track at Anner Wood, near Mullinahone on Sunday, March 10.
Frank, who up to then, was the only Irish rally driver to have won the Manx International Rally on the Isle of Man, was survived by his wife Theresa and four young children.

In more tragic news we reported on the death of a 21-year-old man, with Clonmel connections, in a stabbing incident in Waterford City. The victim, John Paul Ryan, was the eldest son of Anthony and Margaret (née O’Connell) both from Clonmel.

CHARRED BODY RECOVERED
We also reported that gardaí had not ruled out foul play after the charred remains of a middle-aged man were found lying in an outdoor fire in Carrick-on-Suir. The grim discovery was made at 9 pm that Tuesday night by teenagers passing through the Strand Lane area at the back of the Ormond Castle.

MAN ACCUSED OF MURDERING HIS WIFE
Another front page piece, informed readers that a crowd of over 100 people heckled and jeered a man accused of murdering his wife as he was escorted from Carrick-on-Suir Courthouse. John Collison (49) was charged with the murder of 51-year-old Margaret (Rosie) Collison (née Walsh) at the Bell & Salmon Arms Hotel, on Sunday, March 3, 2002.