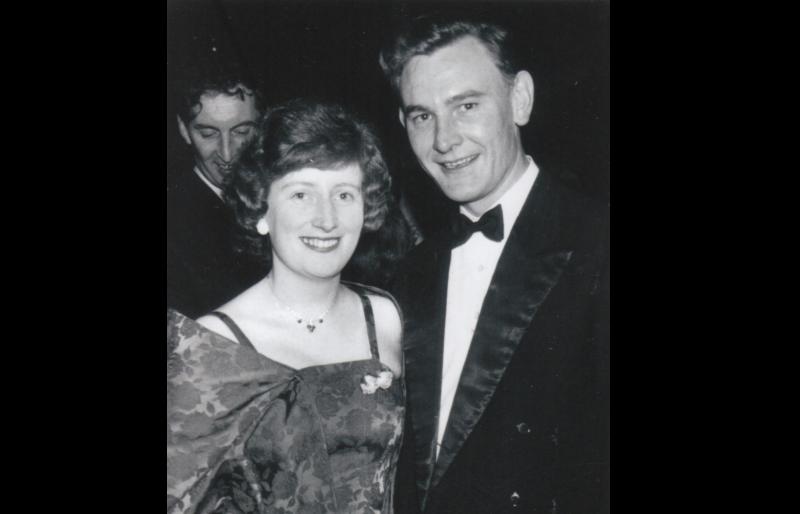 Michael (Mick) McCarthy and his wife Margaret pictured at a St Luke’s Hospital ball, once one of the social highlights of the year in Clonmel. Mick is remembered as a caring and compassionate nurse

The late Michael McCarthy, Clonmel, was a man who never saw barriers in life. Whenever he came across a new challenge, he saw it as an opportunity to acquire extra knowledge.

Better known as Mick to all his many friends and acquaintances, he developed a range of practical skills that he put to full use throughout his long and productive life.

He was never idle, always happy at work and an only regret was that he never had enough time to do all he wanted.

A native of Cork, he set up home in Tipperary in the 1950s, met his future wife Margaret Hallahan, and they reared two sons, Kevin and Tony. They originally lived in O’Rahilly Avenue before moving to the Mountain Road in a house that Mick virtually built himself.

Mick is fondly remembered in Clonmel as a caring and compassionate nurse in St Luke’s Hospital for forty years; as a magician with car engines, servicing the cars of hospital staff members over that time; helping to erect the Holy Year Cross overlooking the town; becoming one of the founder members of the Credit Union in St Luke’s; and showing concern for others as a lifetime blood donor.

Mick, who died on Monday, January 31, aged 93, at Woodlands Nursing Home, Dundrum is most of all remembered as a selfless family man.

He was born in Dungourney, County Cork, in May, 1929. He spent the first few years of his life in east Cork before the family moved to Tinnehinch between Annacarty and Cappawhite.

Yet the draw of the Rebel County was always there and Mick, the eldest boy of a family of ten, and his older sister, Sr. Kathleen, were regular summer visitors to their grandmother in west Cork where family connections remain to his day.

Mick always recalled many happy days from his youth, working in the fields and watching the Yankee Clipper flying boats landing on the water at Foynes, and cycling to see Annacarty win a county hurling title.

He spoke less about a time spent in Lissnaskeigh, County Fermanagh during World War II where his father rented a second farm to trade between American bases and the strictly rationed republic. However, Mick learned practical skills during those difficult years that would stand to him for a lifetime, developing a love of machinery and a self-thought process on how to do blockwork, wiring and farming.

A first career choice for Mick was to join An Garda Siochana, with a letter of introduction from General Richard Mulcahy, but the fall of the inter-party government put a halt to that plan. And rather than take the boat and the route of so many emigrants, Mick applied for a job in St Luke’s Hospital where he was accepted as a general nurse.

It was a role he was ideally suited to, showing compassion and consideration for patients under his care. “That is what I did and that is what I am”, he often recalled. In what was the biggest industry in Clonmel at the time, his calling was to look after the vulnerable and marginalised.

He is fondly remembered by all his friends and colleagues. His friend, John Corbett, said nobody had a bad word to say about him and he never fell out with anyone. Mick was quietly spoken, never spoke ill of anyone, and when he spoke on any matter everyone listened.

Colleague Billy Keeley recalls his calm and personable way with patients and how he was always there as a loyal support for friends.

He fully integrated into the life of the hospital and won two South Tipperary hurling titles with St Luke’s.
Motor cycling was another love and as well as taking part in competitions, he showed a remarkable flair and knowledge of their mechanics.

On one occasion on a pilgrimage to Lough Derg, his bike broke down but that didn’t prove to be a problem. He laid out his trench coat on the ground, took every piece of the Triumph engine apart and reassembled it before taking off again in perfect working order, much to the amazement of a local farmer looking on.

Mick also put his knowledge of engines to good use for his colleagues in the hospital when he serviced their cars in his own private garage.

As one colleague remarked – “Mick made cars a possibility for people who couldn’t afford them”.

Mick McCarthy was always ready to become involved in worthwhile projects in his adopted town and always recalled with pride that he was one of the men to carry the Holy Year Cross from the town up to its present location.

He also saw the value of prudent saving and was one of the young nurses in St Luke’s who attended a meeting to join a new initiative in the town, the establishment of a Credit Union.

The organisers went around the table in alphabetical order for new members to join and Mick recalled that he was the ninth member to join.

Mick was a member of the Pioneer Society all his life and never touched alcohol. He was also a blood donor and was honoured for a lifetime of giving blood.

Mick loved dancing, especially to the Mick Del band, and was a regular at dances in the Collins Hall. It was there he met Margaret Hallahan who would become his dancing partner for life.

They were married in St Mary’s Church in Irishtown and their first home was in O’Rahilly Avenue, bought for £900.

Margaret was a hairdresser in Laharts and soon they set about building a new home. They travelled on Mick’s motorbike up the Mountain Road and picked a spot to build their home where Mick would spend the next 50 years.

And not surprisingly he put all the skills he had developed over the years to practical use in the construction of the family home – as well as skills he picked up from others during the building process.

With the help of friend and builder Tim Corbett they dug the foundations, laid the blocks and plastered the walls. Mick wired the house himself and Mattie Kavanagh did the plumbing until Mick figured out how to do that himself.

He wired many houses and laid many walls for friends in his spare time for years to come. He represented a breed who didn’t see barriers in these tasks, just unacquired knowledge.

Michael (Mick) McCarthy was a quiet and unassuming man, a wonderful husband, father, grandfather and brother, who never sought the limelight. But the friends and acquaintances who turned out at his funeral reflected the esteem in which he was held and he would have been humbled by the swell of affection towards him.

His big sister Kathleen, actively involved in the Presentation Order in Clonmel, was a great help to the family in Mick’s later years and continues to be an inspiration to all who appreciate the term ‘Young at Heart’.