YESTERYEARS: Free cigarettes were being distributed at a Tipperary fashion show 60 years ago 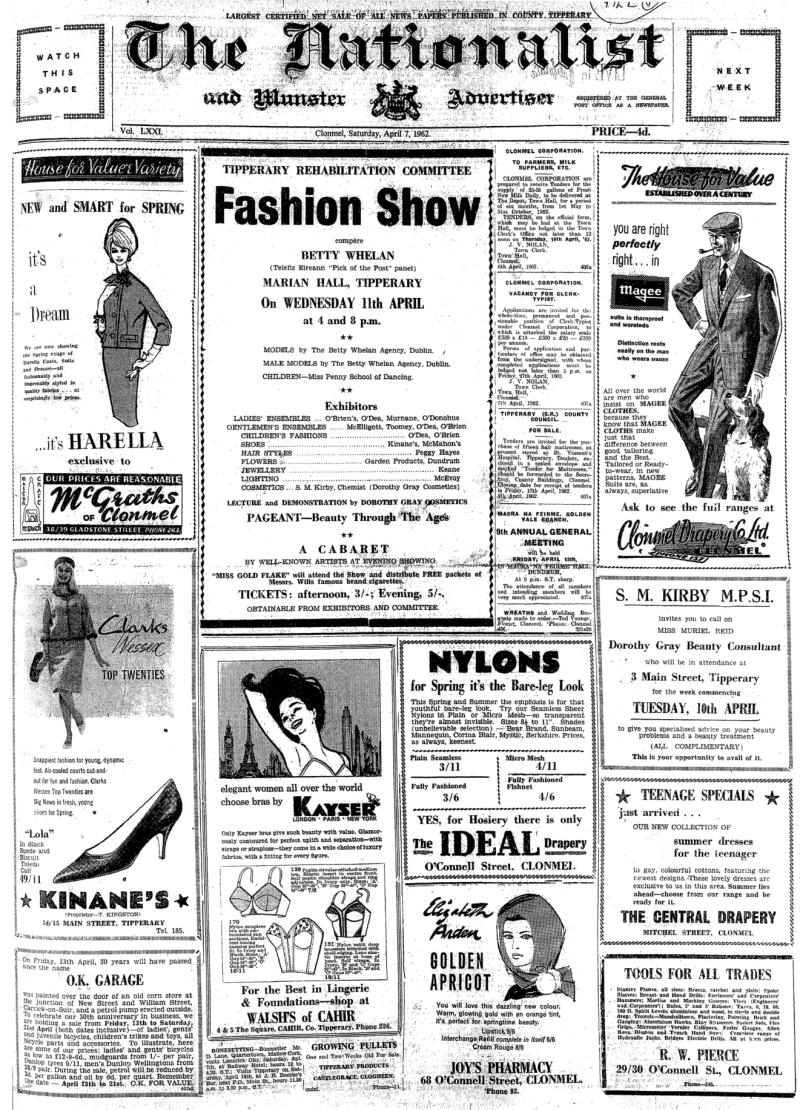 This week for our Yesteryears feature we go all the way back a full 60 years to our edition of April 7, 1962. It will take many of today’s older generation on a trip down memory lane, and at the same time may enlighten younger readers as to some of the changes that have taken place in south Tipperary over the five decades since.
Back then our front page was reserved for advertising only, but the advertisements of the day give a great insight into the business life of the times. Not alone have so many of the products being advertised changed in style and substance, but indeed most of the business names in all the towns are no longer trading today. Sixty years is indeed a long time.
The main advert promoted an upcoming Fashion Show in the Marian Hall in Tipperary Town, with ensembles by the likes of O’Briens, O’Deas, Murnanes, O’Donohues, McElligotts and Toomeys. The male and female models were being shoed by Kinane’s and McMahons, hair styles for the show were the responsibility of Peggy Hayes, while S.M. Kirby, MPSI, were in charge of the cosmetics for the night.
There was to be a cabaret by well-known artists at the evening showing. “Miss Gold Flake” was to attend the show and distribute FREE packets of Messrs Wills famous brand cigarettes. (Imagine the uproar today if that was to happen).

With a quick glance around the front page the names of Clonmel traders no longer there today include McGraths of Clonmel at 38/39 Gladstone Street; ‘The House of Value’ Clonmel Drapery (then established over a century, but no longer extant); the Central Drapery at Mitchel Street; Joy’s Pharmacy at 68 O’Connell Street; The Ideal Drapery, O’Connell Street; and R.W. Pierce at 29/30 O’Connell Street (now, as has been for many years, Bob Fitzgerald’s). Ted Younge, Florist, was doing wreaths and wedding bouquets to order also in April 1962.
Elsewhere around the county that week, Kinane’s Shoes in Tipperary, S.M. Kirby, M.P.S.I, 3 Main Street, Tipperary, Walsh’s of Cahir (Ladies Fashions) and the O.K. Garage in Carrick-on-Suir were all promoting their wares. To celebrate 30 years in business at the time, O.K. Garage were selling gents’ bicycles for £12-9s-6d (good old pounds, shillings and pence), and also during the week-long sale, petrol was to be reduced by 2d per gallon and oil by 6d per quart. The way petrol prices have gone recently you would imagine they’d still be doing O.K. if still in business now.
That week also, Clonmel Corporation were inviting applications for the post of Clerk-Typist, a whole-time, permanent and pensionable position, to which was attached the salary scale of £320x£18 - £500x£20 - £520 per annum (whatever that meant). Hopefully, the then young and successful applicant, now has the feet up enjoying that well-earned pension 60 years on.