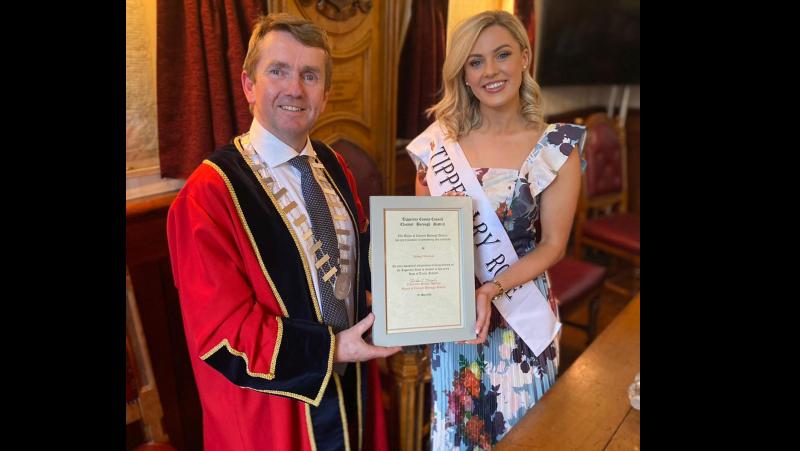 Tipperary Rose Aisling O’Donovan was accorded a Mayoral Reception at Clonmel Town Hall following her selection to represent the county in the prestigious event.
She will travel to Tralee for the International Rose of Tralee festival this August.
Mayor of Clonmel, Cllr Michael Murphy, Cllr John Fitzgerald and Cllr Richie Molloy were present at the ceremony.
They were joined by Aisling, her parents Breda and Sean, sisters Teresa and Sinéad, partner Colm, extended family, friends and neighbours.
Ciarán O’Connell, a representative from the Tipperary Rose Centre, was also in attendance.
“It is such a privilege for me as Mayor to accord a Mayoral Reception for Aisling recognising her outstanding achievement in becoming the Tipperary Rose. Aisling is such an achiever, with an outstanding sporting career, in particular representing club and county in ladies football and an All-Ireland colleges basketball winner,” said Cllr Murphy.
“What has really impressed me as Mayor is how Aisling uses the label of Tipperary Rose to create such a positive narrative around herself, her town and her county. In particular, I highlight her exceptional traits of character, the extent to which she endears herself to so many through all her activities. Special mention of her charitable work, her support to me and the Mayoral Ukraine Relief Fund,” said Cllr Murphy.
He wished Aisling well for the Rose of Tralee festival in August.
“I’ve no doubt she’ll do us proud and in all our eyes, she’s already a winner,” said Cllr Murphy.
TEACHER
Aisling, who works as a primary school teacher in Fermoy, thanked the Mayor for hosting the evening and for welcoming her and her family and friends to the historic Town Hall in Clonmel.
She went on to explain what it means to be a Rose and highlighted that it encompasses many things such as relationship building, human connection, friendship, Irish heritage and of course, fun.
Aisling highlighted the busy nature of the role and how much she is enjoying being an ambassador for the county.
She stated that the Rose of Tralee festival was unique and unlike any other in the world in that it connects the Irish diaspora from far and near in celebration of our culture.
ACTIVE
Aisling has been very active in her role so far and aspires to continue to lead by example for other young people by fulfilling all Rose duties with poise, enthusiasm and professionalism.
On the night, Aisling paid particular thanks to her “incredible” family and partner Colm for their support since being selected as the Tipperary Rose.
GRATITUDE
She also expressed her gratitude to extended family, friends and neighbours for all they have done over the years. A common theme of the night was that “it takes a village to raise a child” and the input of the various people in attendance have contributed greatly to the character and values Aisling has developed and is now utilising to fulfil her ambassadorship as the Tipperary Rose.
Aisling was pleased to thank her local communities, particularly the people of Clonmel, Fethard and Clerihan for their enthusiasm and support.
SPONSORS
She expressed particular thanks to local sponsors, specifically Collab Hair and Make-Up in Thurles and Make-Up By Suzy in Fethard for their support so far. She acknowledged that other businesses have also been in touch regarding sponsorship and is looking forward to working with more local businesses in the lead up to the Festival. It was evident that there was great generosity and support from the people of Clonmel and beyond for our Tipperary Rose.