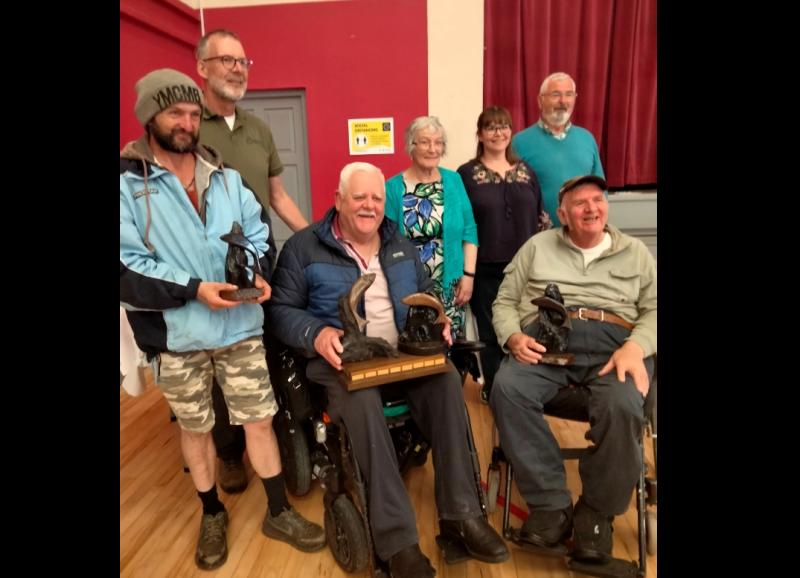 Caption: Paddy O’Dwyer from Carrick-on-Suir seated centre with the Mary Robinson Perpetual Trophy after winning the All-Ireland Trout Angling for People with Disabilities title. Donal O’Halloran from Cahir (seated on the right) won second prize in the competition. They are pictured with representatives of Inland Fisheries Ireland and the angling club in Kilcormac, county Offaly.

Paddy O’Dwyer from 44 Kickham Street, Carrick-on-Suir was presented with the Mary Robinson Perpetual Trophy at an awards ceremony in Kilcormac following the competition at Lough Boora Discovery Park in county Offaly on Sunday, May 29.

Paddy and Donal were among five Irish Wheelchair Association members from south Tipperary who competed in the All-Ireland angling competition.

The other three south Tipperary competitors come from Carrick-on-Suir, Clonmel and Ardfinnan.

During the four-hour fishing contest, Paddy caught 13 trout in Lough Boora with his four heaviest fish weighing 14 pounds. He beat off competition from 50 other anglers from all over the country to reclaim the title.

He first won the All-Ireland angling competition in 2014 and won it again in 2019.

The retired carpenter brought back the All-Ireland trophy to Lough Boora Discovery Park as the competition hadn’t been run in the past two years due to the Covid-19 pandemic.

“I told the organisers to give it to someone else this year; I didn’t want it anymore,” recalled Paddy.

“But the minute I caught the rod in my hand and cast out my mind changed completely and I thought I had to win this. The competitiveness that is in me still is unreal.”

Paddy has fished all his life, learning his angling skills along the banks of the River Suir in his hometown where there is a strong tradition of river fishing.

He points out the O’Dwyer family are the oldest river fishing family in Carrick-on-Suir.

He only began angling competitively after becoming a wheelchair user following an accident 20 years ago. The river bank in

Carrick is not suitable terrain for him to fish, so he goes on Wheelchair Association angling expeditions every month to different fishing spots around the country and competes in angling competitions for wheelchair users. “I love to fish, it’s just the relaxation of it and the enjoyment you get from it,” said the retired carpenter.

Paddy thanked the organisers of the All-Ireland Trout Angling Match for People with Disabilities.

And he paid tribute to the South Tipperary Irish Wheelchair Association branch volunteers who transport him and fellow anglers in the association on fishing outings and to competitions around the country.

In 2018, Paddy raised funds for the Irish Wheelchair Association by parachuting from an aeroplance 13,000 feet above the earth at the Irish Parachute Club on the Bog of Allen in county Offaly – a feat most able bodied people would be terrified to do.