‘Unused’: Empty building evokes happy memories of dancing for many in Thurles and beyond 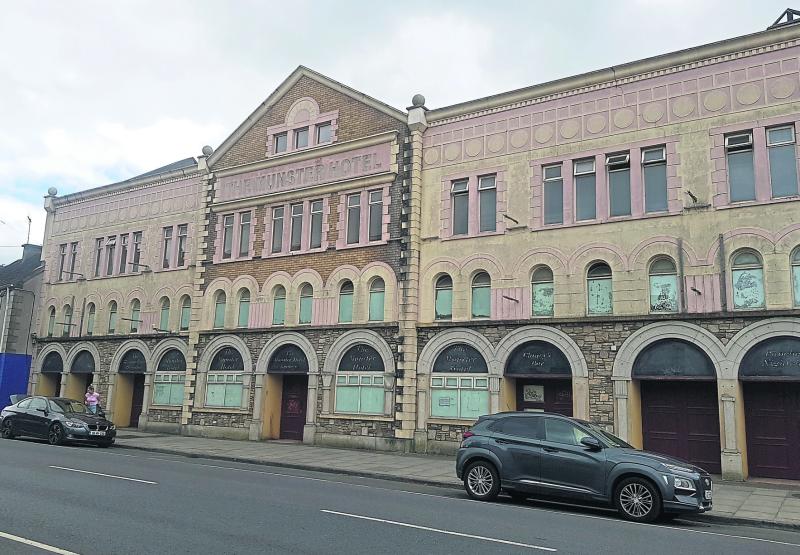 The Munster Hotel in Thurles - planning decision due on August 4

A major planning decision is due soon on a redevelopment in the heart of Thurles that has the potential to breathe new life into the centre of the Cathedral Town.

The Munster Hotel has stood unused on Cathedral Street for years with many local people wondering what a future it could have.

Developer and owner Martin Healy has applied on several occasions for a change of use from hotel to other uses for the now unused building on a prime site in the middle of Thurles - a building which evokes happy memories of dancing and socialising for many Thurles people.
The most recent application for development was received on September 10, 2021.

This would involve the “change of use of part ground floor from hotel use to retail use incorporating a single storey extension to rear and part of existing basement for storage including all ancillary accesses from basement to ground floor, minor front and rear elevation changes and extension and alteration to existing carpark into garden area to rear of former hotel which includes public lighting, bin store, trolley bays and all ancillary work and permission for new signage to front and rear elevations with all associated siteworks and ancillary works.”

So far, one submission has been received, from Very Rev James Purcell PP, on October 14 last year.
Further information was sought by the Council on November 2 last year, and this was furnished on July 8 this year.

The Tipperary Star contacted Mr Healy, who rarely comments on the site.
This is the fifth application by him in seven years and could be the last. Mr Healy purchased the site in 2015.
A previous application, in 2018, was for a BoyleSports Bookmakers Office, and in 2019 for a change of use to a retail setting.
If the latest application is not successful, “I will give up,” he said. “I have answered all the further inquiries.”

“I have worked with the council and hopefully met all the criteria involved in this submission. There have been eight consultancy firms of the highest calibre.”

Several engineers, and various firms, from Dublin, Kilkenny, and Tipperary have been involved. “This premises needs rejuvenation,” he said. The town “needs this, and we’re facing challenging times”.
Mr Healy said all his projects have been successful, and have been developed to a high standard. It’s understood this project could cost at least €6.5m. “It’s a 60,000 sq ft building. It’s the largest building in Thurles.”

The inside of the building is unused, and requires huge maintenance just to keep it at its present level of structural integrity.

“All problems have been addressed,” said Mr Healy in relation to water in the building. “There’s maintenance throughout once a month. It has not been let go derelict like people are saying.”

A decision is due on or before August 4 next.