Mosaic was created as part of Bealtaine Festival 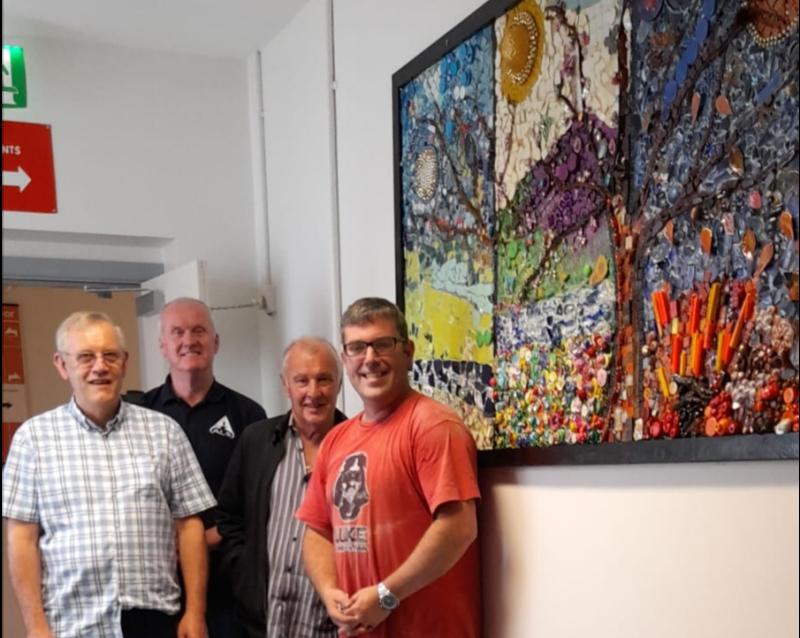 The Bealtaine Festival, which supports creativity in older age through the local arts offices, is held nationally every May.
As part of the festival, a timber board measuring eight feet by four feet was bought and sealed by Maureen Purcell, the facilitator of the Clonmel Community Mosaic project, who is also the organiser of the South Tipperary Art Group (STAG) in April.
Carpenter Michael Conroy made a frame for the board, which was placed in the infant school at Ss Peter and Paul’s Primary School in Kickham Street, Clonmel.
A call went out to older people in the Clonmel and district community to participate in the mosaic. The initial theme suggested by Maureen Purcell was the Circle of Life.
The response from the public was slow at first but very soon over 18 people from all walks of life, mostly retired, were participating. Within a short space of time the theme changed to The Four Seasons, as those working on it felt it needed to be expanded while still encompassing the original theme.
“As the facilitator, I found it great fun working on the project with different groups from the community,” says Maureen Purcell.
“The banter was mighty and though progress was slow, as not everyone was available all the time (we finally ended up with 28 people working on the mosaic), it was well worth it in the end.”
Earlier this month a thank you reception was held in the school for all those who were engaged in the project in any way – those who brought in old ceramic plates and cups, costume jewellery, tiles, beads, buttons and plastic bottle tops; those who participated in the mosaic; the photographer, Robbie Cantwell, who took photos of its progress, and those who cleaned up on a regular basis after each session.
The former Mayor of Clonmel, Michael Murphy and the former Deputy Mayor, John Fitzgerald, had the honour of unveiling the mosaic, to great applause.
The finished product was whisked off by Vinny Burke, Bartley Burke, Michael Conroy and Keith Hamilton to Tipperary University Hospital, where it is now on display in the outpatient’s corridor for the next few months.

All involved are very grateful for the financial support of the Bealtaine Festival Committee/Arts Office in Tipperary County Council for this worthwhile project.
Sincere thanks are also extended to the principal of Ss Peter and Paul’s Primary School, Yvonne Moran, for the venue; the manager of Tipperary University Hospital, Marie Burke for displaying the mosaic, and all those who participated in any way.

Others who dropped in every so often included a retired legal secretary, a retired farm manager, a special needs assistant (SNA), a retired member of the council staff, a builder, a carpenter and a retired IT person.
The Four Seasons mosaic will need a permanent home eventually, so anyone interested in providing one should contact Maureen Purcell at 086-8096823.