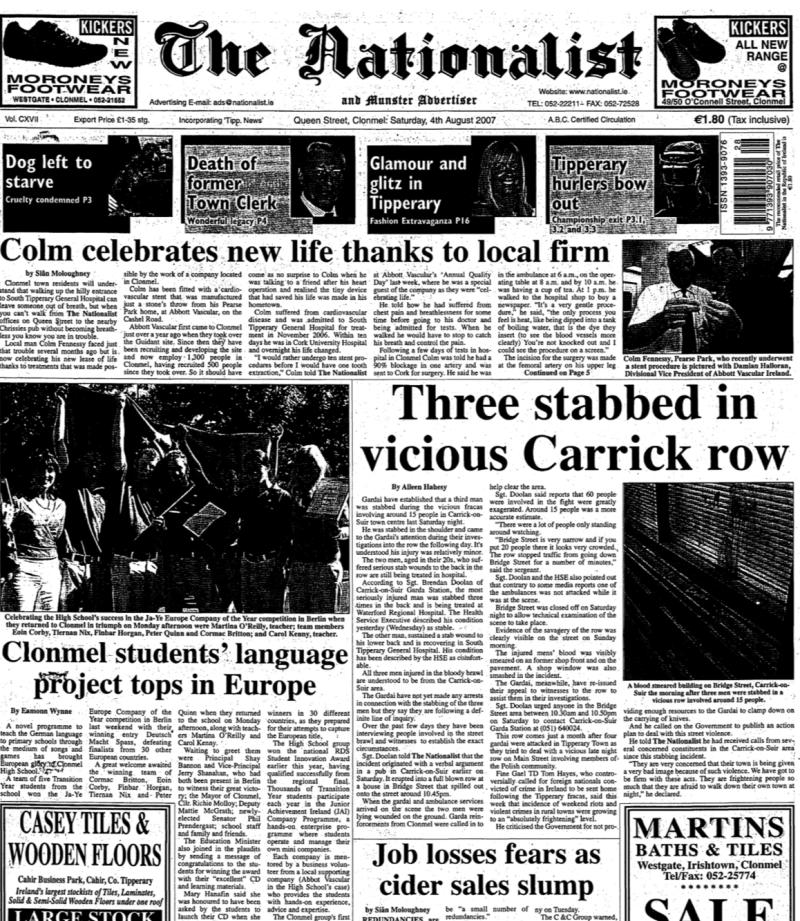 The front page of The Nationalist from August 4, 2007.

This week for our YESTERYEARS feature we go back to our front page from August 4, 2007. That week the lead story reported on a vicious fracas involving around 15 people in the Bridge Street area of Carrick-on-Suir the previous Saturday night.

Two men aged in their 20s suffered serious stab wounds and were being treated in Waterford Regional Hospital.

The most seriously injured had been stabbed three times in the back.

It also came to the attention of the Gardaí the day after the fracas that a third man had also been stabbed in the shoulder but his injuries were not serious.

Clonmelman Colm Fennessy also made the front page that week after being fitted with a cardiovascular stent that was manufactured just a stone’s throw from his Pearse Park home at Abbott Vascular on the Cashel Road.

A delighted Colm told reporter Sian Moloughney at the Abbott Vascular Annual Quality Day: “I would rather undergo 10 stent procedures before I would have one tooth extraction.”

Also that week redundancies were being considered as part of cost savings measures at Bulmers in Clonmel following the loss of more than 25% of the company’s value on the Irish Stock Exchange.

The share price drop wiped €690 million off the value of the drinks company.

The wet summer weather was being blamed as the main culprit for the lack of sales of Bulmers in Ireland and the UK (marketed as Magners).