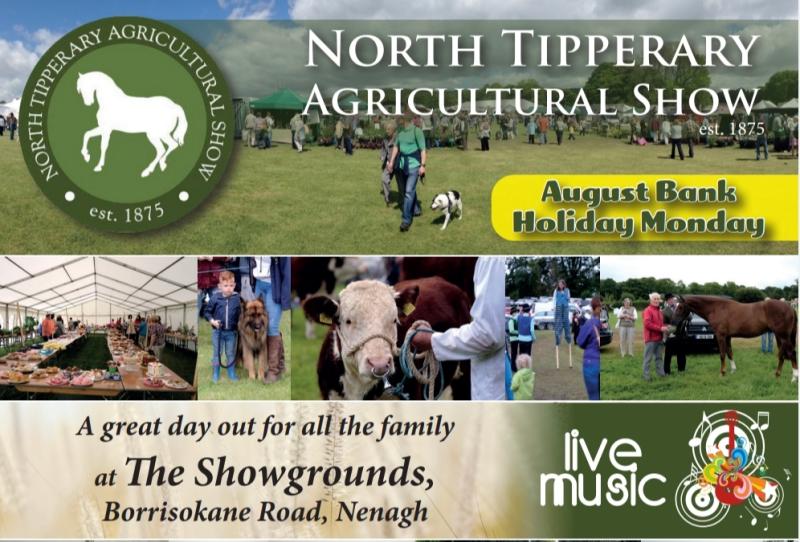 The North Tipperary Agricultural Show is to return in person next Monday following a three-year absence.

TipperaryLive spoke to the show’s chairperson Brendan Murphy about what people can expect from this year’s event.

He said the organisers and people in North Tipperary are excited about the show’s return.

“It’s not only a local show. It’s a community event too and people like meeting each other and after covid and the last few years I think this is what people need to get back and socialise.

“It’s a celebration of the community, really,” said Brendan.
Brendan says the show as an agricultural show will have livestock displays, arts and crafts, horticulture and competitions.

“So, all that’s staying the same, and the entries are quite high this year, so we expect it to be busier than previous years,” said Brendan.

One change however, to the show is the show jumping will not take place.

Another more exciting difference is more entertainment with music and performance throughout the day.

Aisling Rafferty is to perform as well as Bubba Shakespeare, the Nenagh Brass Band and REV-20.  Also, on the day will be circus performer Paul Quaid accompanied by the Cloughjordan Circus Club.

“We pulled out all the stops on entertainment this year,” said Brendan.

The dog show will also be a well-anticipated feature, and the Nenagh Classic Car Club will put their collection on display.

Local groups have been invited to set up their stalls advertising what they do in Nenagh.

“Really, this is the people of Nenagh show or the north Tipp show, so again that’s putting it all under the umbrella of community events, and that’s why it’s so important.

It’s about people more than the actual show, said Brendan.

Brendan says the show was founded in 1875, making it one of the oldest shows in the country. Generations have participated over the years, so people really feel part of the event.

The show went virtual last year due to Covid-19.

“We’ve had no show as such for the last three years, so this is our big comeback,” said Brendan.

The North Tipperary Agricultural Show will take place on Monday, August 1, at the Nenagh Showgrounds on the Borrisokane road.

Finally, Brendan wants to thank the local businesses for their sponsorship. Without their support, the North Tipperary Agricultural Show would not be possible.