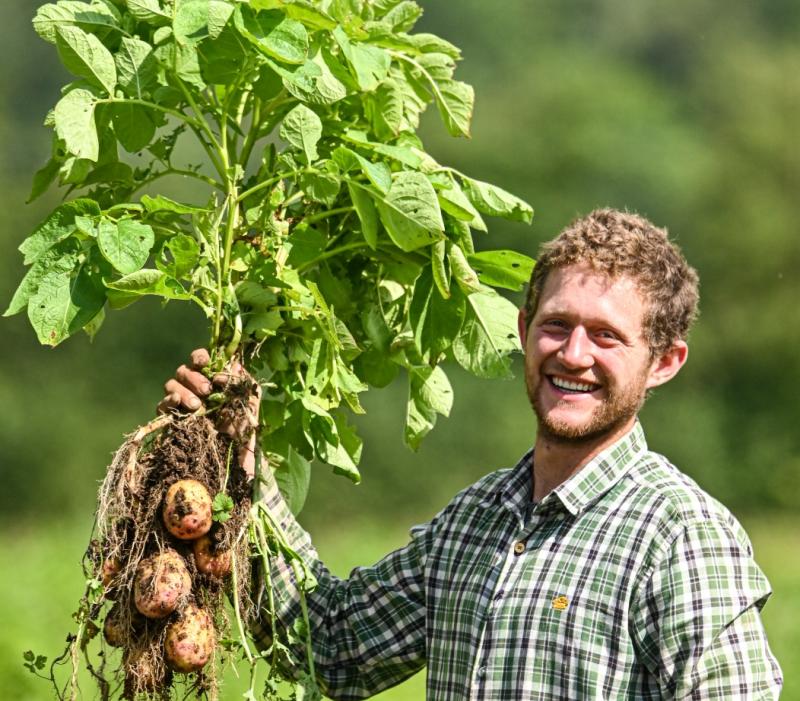 One of the biggest challenges facing farmers is the need to adapt their practices in order to become more sustainable.

In Tipperary, members of Cloughjordan Community Farm have found a solution that not only provides a guaranteed food supply to the village, but also generates a vibrant hub of activity in the area.

Before helping to create the community farm, horticulturist Pat Malone worked as a commercial producer of lettuce and scallions, with his business employing six people and supplying sixteen supermarkets.

“I was disillusioned with what I was doing,” said Pat. “I thought the type of growing I was trained in that used methods like artificial fertilisers and sprays didn’t make sense to me anymore. After doing it for ten or twelve years I was destroying the ground rather than improving it.”

Pat decided to specialise in conservation and joined Irish Seed Savers, adopting their ethos of preserving Irish varieties of vegetables, fruits and cereals.

“We would have at any one time up to six months of supply, whereas a supermarket would run out of fresh vegetables in less than a week,” said Pat.

The farm is eight acres and operates beside the eco-village - an ongoing project to create an eco-village community with commitments to ecological, social and economic sustainability. One third of the farm’s membership comes from the town of Cloughjordan, and two thirds comes from residents of the eco-village.

The community ownership model allows all members to have a say on how the mixed vegetable farm is run. The membership has varied between 50 to 80 families over the years.

The subscription method is paid in monthly instalments and means the farm has a guaranteed capital to pay wages, buy seeds and other inputs.

Organic farming expert and member of the farm, Dr Oliver Moore, believes the community approach offers solutions to some of the most pressing issues facing rural Ireland.

“The way the world is at the moment in terms of fertilisers, climate change and war, there are so many variables with our food system that are risky and fraught,” said Oliver.

“With community farming, you can control the food you are consuming, and the advantage is that you are making a positive environmental impact.”

The ethos of the farm is organic with no fertilisers, pesticides or herbicides used.

The farm also brings an injection of youth to the area as it welcomes European students as part of the Erasmus exchange programme. The scheme offers the students the experience of learning from the Irish farming methods.

Any group of 50 people could create a similar model to Cloughjordan, with one method being to set up a WhatsApp group of those interested and approach a farmer to put aside five acres for vegetable growing for the next five years.
The group scheme allows a cash injection for polytunnels, storage and machinery, as well as guaranteeing a market for the produce.

Another method is to approach an established grower and offer to make an arrangement, with this being an easier approach as the infrastructure is already in place for growing.

The collaboration is mutually beneficial, with the grower guaranteed an income and the members enjoying locally sourced produce. Another benefit of the model is the sense of community it cultivates, with members encouraged to come onboard with projects such as rainwater harvesting or maintaining part of the polytunnel. “That’s one of the nicest things about it,” said Oliver.

“Having a community involved on some level makes it less isolating for the farmer, but that’s especially the case at planting time and harvest time for the big field scale crops like potatoes and onions when the members can lend a hand. When you think of the whole dynamic of rural Ireland, farming is not associated with people and vibrancy and life, it’s the opposite with on the decline.

“With eight acres of vegetable production, we have about nearly two dozen people involved every week.”

The distribution centre is also buzzing with activity on delivery dates.

Not all community farms need such involvement, however Cloughjordan opted for the hands-on approach to give members an opportunity to engage with the processes.

The farmers are expert growers interested in nutritionally-dense food and focus on building soil quality through using methods such as selecting, rotation and composting. These methods help create optimal varieties, such as developing an onion that has a narrow neck to exclude moisture. While supermarkets may be cheaper, Cloughjordan Community Farm not only works at producing vegetables, but transforming the community into a thriving hub of activity.

“We are giving people an opportunity to have a say in creating a vibrant place in rural Ireland where there is reasonable employment, there is good land management and there’s continuity of supply of vegetables that are locally and ecologically produced,” said Oliver.

With certain products plentiful and creating a surplus during the year, the farm devised a digital farmers’ market where customers can pre-order products from the local suppliers.

Suppliers then bring what is sold online, a time-efficient solution that also brings economic activity to the small village and gives farmers an outlet to sell produce.

Oliver believes the community farm is moving with the times as farmers are going to have to make adjustments to their practices.

The type of diversification that comes with a community farm can bring countless benefits to both the producers and customers.

“That’s one way rural Ireland can revitalise,” said Oliver. “It’s not just about saving what’s there, it’s also about coming up with tweaks and adjustments, new ideas and things people are interested in that might attract people to living in rural Ireland.”