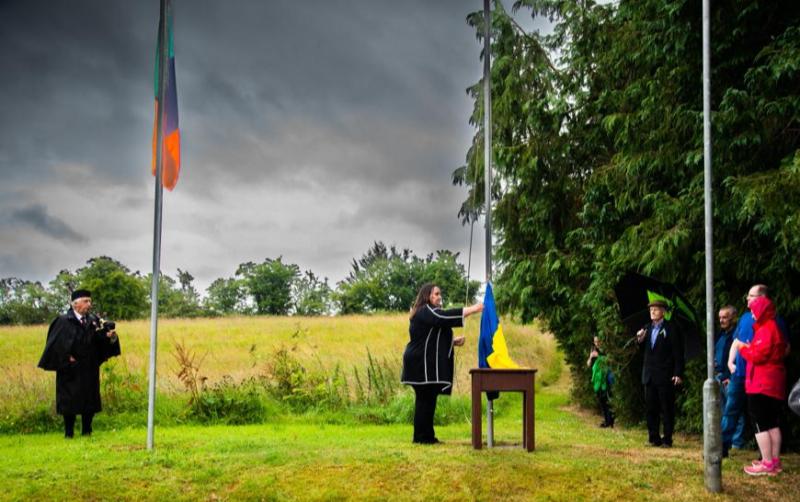 At the Famine Warhouse in Ballingarry on Saturday last, at the conclusion of the 1848 Famine Walk, the Ukrainian Ambassador, Ms Larysa Gerasko, raises her national flag

1848 Famine Walk
There was an air of excitement in The Commons on Saturday last as the expectant crowd awaited the arrival of this year’s Walk leader, Ms Larysa Gerasko, the Ukrainian Ambassador to Ireland.

The scene was set with a large crowd present, an RTE camera and news reporter Pascal Sheehy, several photographers, Gardaí and Civil Defence, Ukrainian visitors from Kilkenny and Littleton and many people from Ballingarry and beyond.
Eventhough the weather wasn’t what was wanted, nevertheless nobody seemed to mind.
As the clock approached 3 o’clock, Ms Gerasko arrived and was almost immediately approached by Pascal Sheehy of RTE for an interview, which was later screened on RTE News at 6 and 9 o’clock.
Martin Maher, chairman of the organizing committee called everyone to order and asked Dr. McGrath to give a brief history of events after which he introduced this year’s Walk leader, Ms Larysa Gerasko, who addressed the assembled gathering in English and Ukrainian, before setting off being led out by 2 Moycarkey pipers.
The starting point for the Walk is always from the Young Ireland and National Flag monument at the Cross of The Commons. The Walk covers 1½ miles and concludes at the 1848 Famine Warhouse - the State National Heritage Site.
The Walk commemorates the Famine and the 1848 Rising and remembers all those who suffered, died and emigrated during the Great Famine.
By the time the walkers reached their destination many more people had already assembled there.
For the past few years, because of Covid, no access or limited access was allowed on site, but this year all restrictions were lifted and everything had returned to normal. Dr. McGrath gave a detailed account of events at this historic House and how it helped to lead us forward on our road to independence from a foreign aggressor.
Ms Gerasko in her keynote address noted the similar struggle for freedom in Ireland to their struggle now against their unwanted aggressor Russia.

After her moving speech a bouquet of flower was presented to the Ambassador, following which refreshments were served under the large trees outside because of the heavy downpour of rain.
Thanks to all who helped in making this special event the success that it was: caretaker John, Dr. Tom, Martin, Jimmy, Tony and his brothers for parking, Marie and her helpers for refreshments, James for sound equipment and Dermot for microphone and our two photographers Paul and Mark.