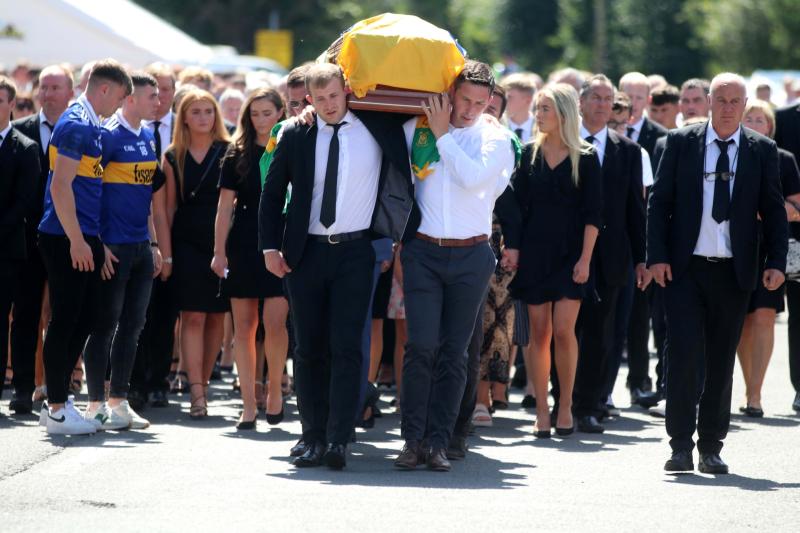 The sacred sod of Semple Stadium, so loved by Dillon Quirke and his contemporaries who regard the Field of Legends as the finest place to display the skills of the ancient game, was fittingly dug up and transplanted into his final resting place in Clonoulty Cemetery.

The thousands who descended on resplendent Gorteenamona, Rossmore on Sunday and Monday evenings were to pass that sod, marked as the place where Dillon Quirke lay his head to rest for the last time, and they were also treated to a range of framed photos and jerseys from a very successful innings of the field of play despite his career being cut so tragically short.

The photo of the Clonoulty/ Rossmore U21 county hurling final winning team of 2018 was the first one to greet visitors - an indication of the great love and regard of club which Dillon and the Quirke family possess. That love and regard was returned one hundred fold since tragedy unfolded on Friday evening - Clonoulty/Rossmore GAA club and the people of the parish can be so proud of their efforts to leave no stone unturned and for the arms of welcome which were opened wide to the masses.
With the sun blazing down from the blue sky and the summer season in full flow, it all seemed at odds with the mood of the assembled gathering. 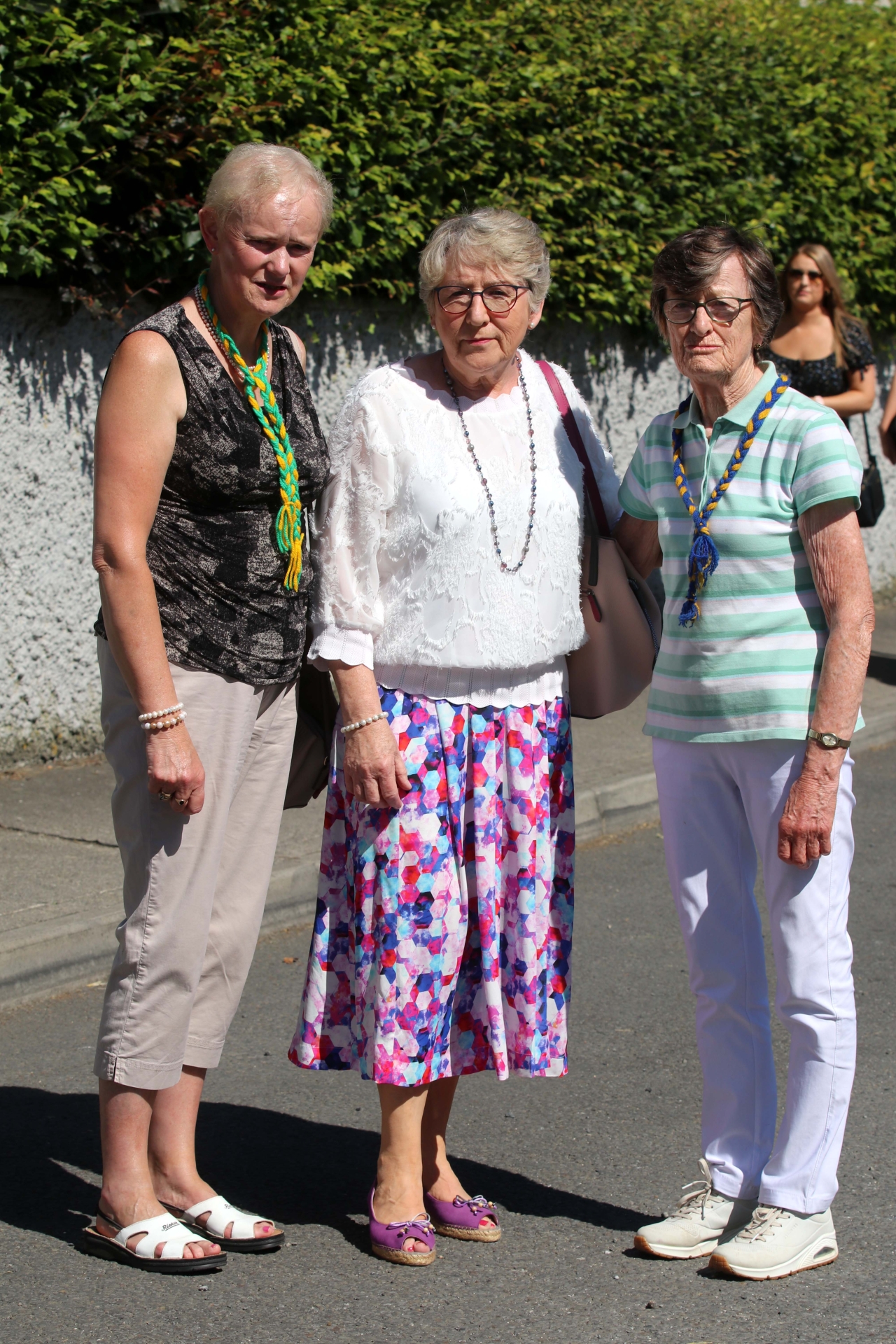 The silence was deafening as people made their way through the long line of mourners - a line which meandered out the front gate, down the road, into the adjoining field and right around the perimeter of that field.

Tipp colleagues visited
Dillon’s colleagues on the Tipperary and Clonoulty Rossmore team had been there on Sunday evening - his clubmates had gathered in St John the Baptist Church on Friday evening to pray for their friend, before news of his passing became known.
They joined the hundreds who attended the vigil in Clonoulty/Rossmore GAA field on Saturday evening with candles, flowers and tributes being placed at a shrine in the middle of the stand.

Those Clonoulty/ Rossmore players were there again on Monday and Tuesday, helping and assisting, supporting and catering, welcoming and chatting. Their presence and each other’s company will be needed more than ever in the coming weeks and months. 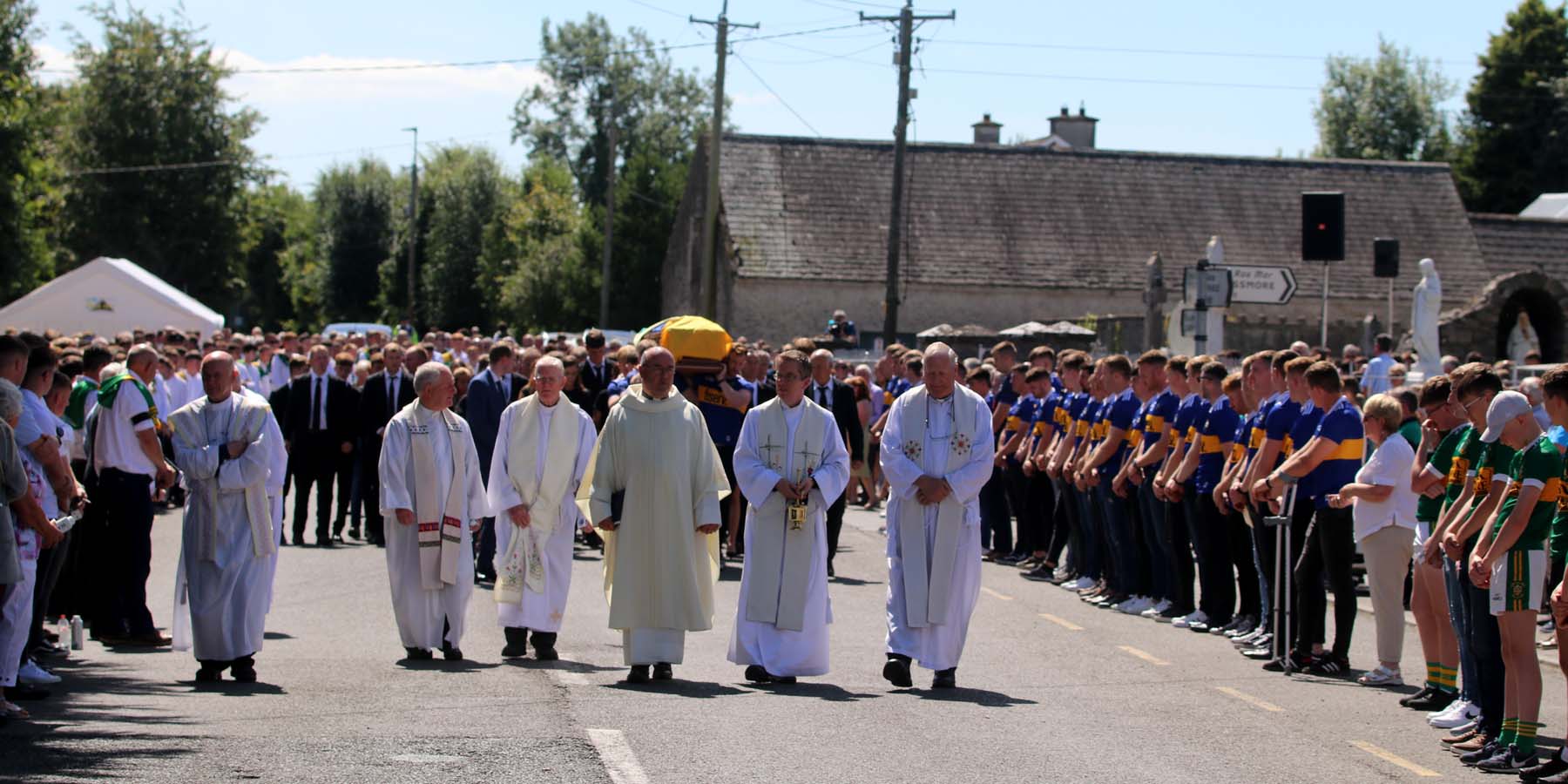 GAA family to the fore
The GAA family from the highest office to the ordinary club member found their way to Rossmore - Eircodes and google maps had helped with the voyage, but the reality is that Dillon Quirke did not need such devices to find his way into the hearts of hurling people. His commitment to the game he loved and his earnest determination to wear the blue and gold jersey, and excel in it, had long since endeared him to the Premier folk.

But, the regard in which he and his family are held, extended far beyond the county boundary. Kilkenny, Waterford, Limerick, Cork, Clare, Galway, Offaly, Kerry, Wexford, Dublin, Laois - every county you care to mention was represented and every club in Tipperary was there too. It was really something to see the many club jerseys of Tipperary coming into the front garden - upon request, the number 11 jersey of each club made an appearance.

Despite the profound sadness and the sense of tragedy which permeated the air, there was also a determination to celebrate a life which had touched so many and achieved so much in just twenty four years. There was sunshine and sadness and the words of that popular and current George Ezra song seemed apt -
Green, green grass
Blue, blue sky
You better throw a party on the day that I die.

Whatever about a party, there was certainly a celebration and the Quirke and Fryday families proved impeccable hosts as they opened their doors to the thousands who came and saw Dillon laid out immaculately with that distinctive red helmet, his hurler and of course the Clonoulty/Rossmore colours adorning his coffin.

They came from far and wide
From Brian Cody, to John Kiely; Ken McGrath to John Leahy; Babs Keating to Noel Sheedy; Eamon O’Shea to Tommy Dunne; County Board officers; Munster Council officials; current and past players from all over; opponents and colleagues; GAA Presidents; Croke Park representatives; referees; supporters - they all came as one; all with the hand of friendship, warmth and comfort. They spoke in hushed tones of Dillon Quirke’s many fine qualities - his loyalty, his sunny disposition, his friendly demeanour, his determination, his single-mindedness, his thoughtfulness, his kindness. They offered support, offered a handshake and a 'Sorry for your trouble'. 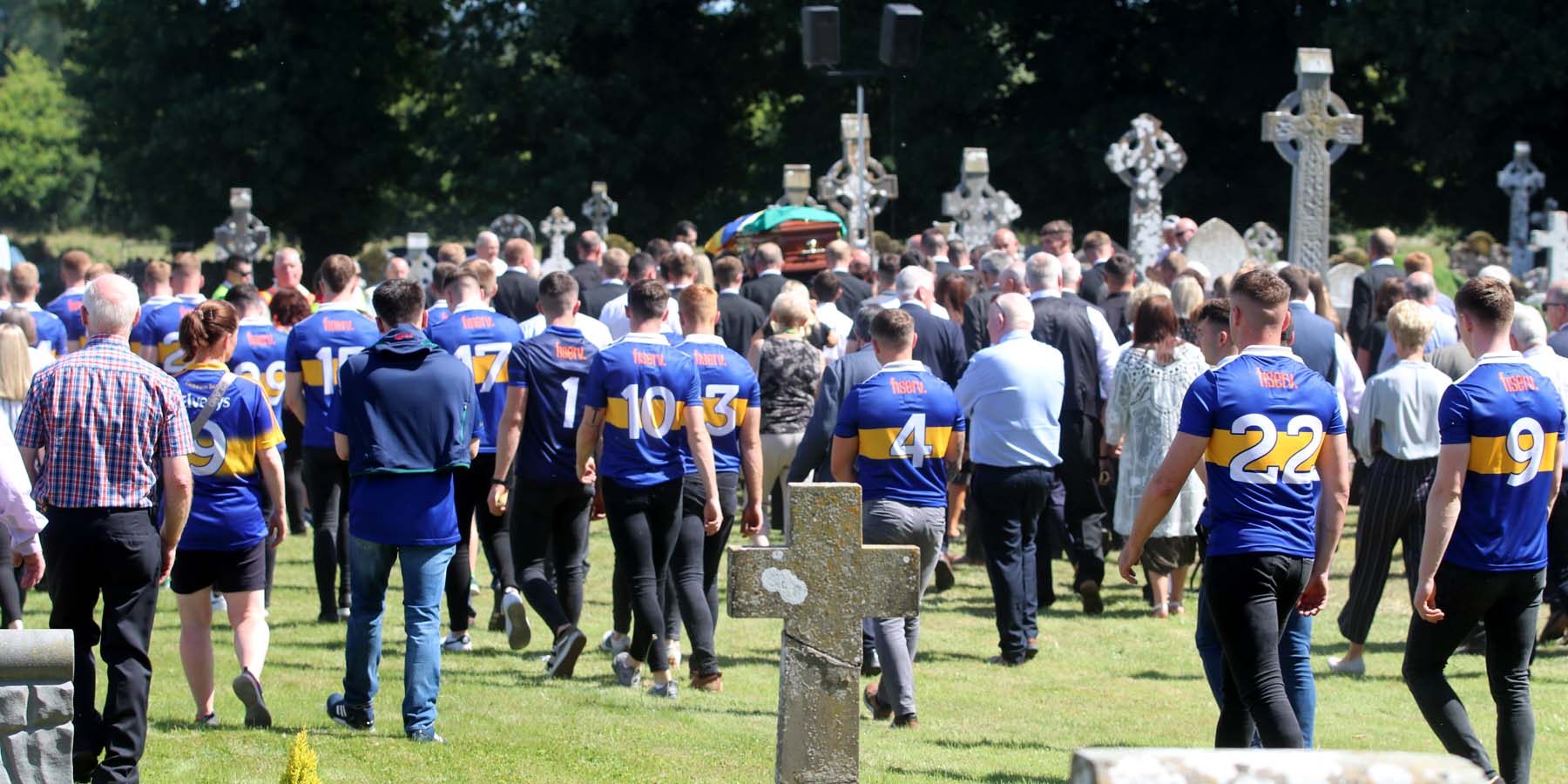 But, it didn’t really matter what they said or what they did - what mattered was that they were there in all their beautiful awkwardness. Offering sympathy whether with a nod, an extended hand, an embrace or a few words, should never feel awkward - it is, after all, the very essence of humanity.

Peace descended on Gorteenamona
As the afternoon drifted into evening; and evening gave way to a balmy August night, the pilgrims still beat a pathway to the door of the Quirke home and were still greeted with the same warmth. The queues eventually petered out as a peace descended upon Gorteenamona and a chance for the family to catch a breath and rest before they would take their son, brother, grandson, nephew, cousin, neighbour and friend on his final journey from Rossmore into Clonoulty village, St John the Baptist Church and then onto the adjoining cemetery following Requiem Mass.

Jimi Hendrix wrote and sang in his number Bold as Love: “I’m the one that’s got to die when it’s time for me to die, so let me live my life the way I want to.”

Dillon Quirke loved his life; loved his club; loved his family; and loved his hurling. He lived his life for hurling and when it was time for him to die, he died hurling in a place he loved.

Perhaps there is some consolation in that for his heartbroken parents, his sisters and the extended Quirke and Fryday families.
Perhaps.