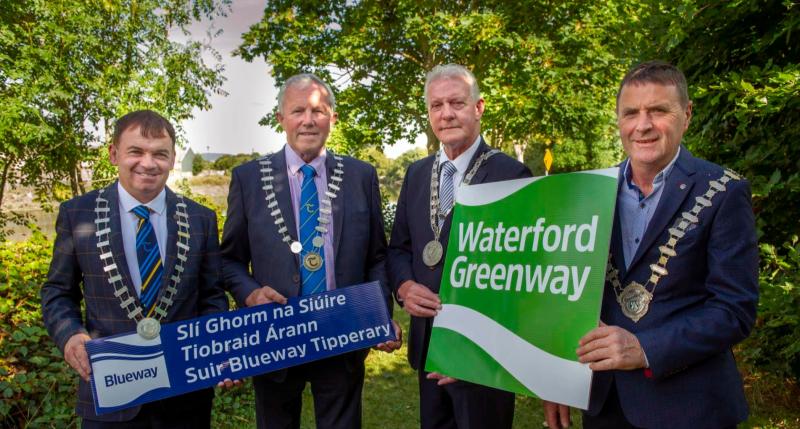 A public consultation process is underway to find out the public’s views on linking the Suir Blueway in Carrick-on-Suir with the Waterford Greenway at Kilmeaden.

Tipperary County Council and Waterford City & County Council have begun the public consultation phase as part of its joint study examining the feasibility of connecting the two hugely popular walking and cycle routes.

A web portal with details on the project study area and how to make observations or submissions opened last Wednesday, August 31 and will remain open until Friday, October 7.

The feasibility study is being funded by Transport Infrastructure Ireland.

The Waterford and Tipperary local authorities have engaged a multi-disciplinary team led by Tobin Consulting Engineers to carry out the feasibility study on their behalf.

Tipperary County Council said providing a recreational trail to connect the Suir Blueway and Waterford Greenway has the potential to build on the investment in both amenities, substantially enhance the overall visitor experience and extend visitors’ time in the area.

“This proposed connection has the potential to deliver a differentiated, attractive, and authentic visitor experience through a varied landscape connecting to and supporting the economic development of Carrick-on-Suir, Portlaw and Kilmeaden.”

The council spokesperson said it also had the potential to “entice visitor flow” between Ormond Castle, Curraghmore House and the Waterford Suir Valley Railway as well as the Greenway and Blueway.

Cathaoirleach of Carrick-on-Suir Municipal District, Cllr David Dunne, told the launch of the public consultation process that this was an enormous opportunity to build on the wonderful amenities provided to our citizens.

“It will have a major impact on the health and wellbeing of generations to come and will place Carrick-on-Suir in an enviable position at the heart of two incredible recreational and tourism offerings.

“We will welcome the economic spin-off that will undoubtedly follow and we look forward to further fostering links with our neighbouring communities in county Waterford by embarking on this exciting joint venture.”

Mayor of Waterford City & County, Cllr John O’Leary, said he was looking forward to members of the public getting the opportunity to find out more information and to comment on what has the potential to be an extremely important and beneficial recreational project for the people of Waterford and our near neighbours in Tipperary.

“We have seen at first hand the transformative effect that amenities such as the Waterford Greenway can have.

“I am confident that this current proposed project has significant potential to add to the existing Greenway experience and to benefit the communities of Kilmeaden, Portlaw and Carrick-on-Suir, in particular.”

You can view the study area and have your say on this exciting project by logging onto the websites of Tipperary County Council and Waterford City & County Council.

Further information is available for inspection at the offices of both local authorities at Carrick-on-Suir, Clonmel, Waterford City, Dungarvan and also Portlaw Library until October 7.